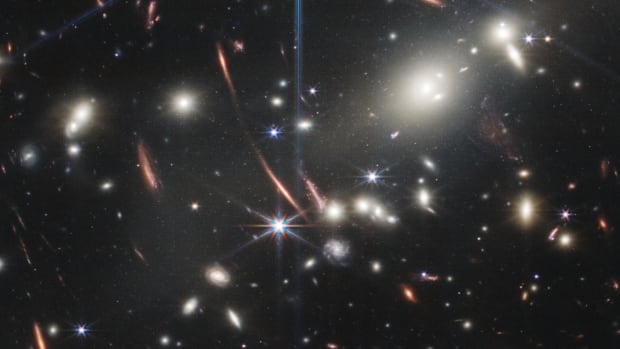 
The James Webb Space Telescope (JWST) has promised to take us back to a time when our universe was in its infancy. And so far, it’s keeping its word.

In a new paper published in the Astrophysical Journal, a team lead by a group of Canadian astronomers has found evidence of some of the oldest known stars.

The stars lie within a globular cluster — a sphere of tens of thousands to millions of stars tightly held together by gravity — in a galaxy that is just four billion years old, a mere child in astronomical terms, considering our universe is roughly 13.8 billion years old.

Globular clusters aren’t well understood, at least in terms of when and how they form. Most galaxies have them; our own Milky Way contains about 150.

But it’s unknown whether or not these stars formed before the galaxy itself did or after. And most importantly, astronomers want to know when they formed in relation to the Big Bang.

This is what intrigued a team of Canadian astronomers as they gazed at the first image ever released by JWST.

Last July, as the first images from the newly launched JWST were coming in, almost a dozen Canadian astronomers gathered around a table in Halifax. Part of the CAnadian NIRISS Unbiased Cluster Survey (CANUCS) team, they were anxious to see what new views of the universe the telescope might reveal. (NIRISS is the Canadian-made Near-Infrared Imager and Slitless Spectrograph camera on JWST.)

They were not disappointed.

Among the five images, one stood out from the rest: Thousands of galaxies piercing through the darkness; white, orange and red dots dating back to a time when our universe was in its infancy.

To some members of the team, there was one particular galaxy that was intriguing: an elongated orange streak located nearly in the centre of the image. Around it, several yellowish dots, likely densely packed stars containing thousands to millions of stars, called globular clusters. Due to these dozen dots surrounding it, the galaxy began to be referred to as the “Sparkler.”

Some wondered: Could this help answer whether or not globular clusters were relics of our ancient universe?

While some believed the answer to be yes, others disagreed.

Wagers were made among the group: Old stars vs. young stars. At stake: Exotic candy from a nearby store in Halifax.

“There was a lot of debate going on about whether these are young or old immediately, right off the bat,” said Kartheik G. Iyer, Dunlap Fellow at the Dunlap Institute for Astronomy & Astrophysics at the University of Toronto and co-lead author of the study.

As each of the post-docs gathered and went through various steps of analysis, two senior researchers, Roberto (Bob) Abraham, a professor of astronomy and chair of the David A. Dunlap Department of Astronomy and Astrophysics at the University of Toronto, and Chris Willott, with the National Research Council Canada’s Herzberg Astronomy and Astrophysics Research Centre who is leading the research, gave them each a candy after they completed each task.

“Chris and Bob had the wager that, are these young or old? And Bob claimed that these are old,” said Lamiya Mowla, Dunlap Fellow at the Dunlap Institute for Astronomy & Astrophysics at the University of Toronto who is also co-lead author of the paper.

After weeks of analysis, they concluded that, of the 12 objects in the Sparkler, five are not only globular clusters, but some of the oldest known, forming only 500 million years after the Big Bang.

“This really surprised us, and also made us very excited, because our Milky Way itself has about 150 of these globular clusters around them. And we know that they are old, but we don’t know how old they are, exactly when they were born,” said Mowla.

The age of the rest of the objects were undetermined. That meant everyone won.

“So yeah, at the end of it, everybody, I think, got some candy,” Mowla said.

A little help from some friends

The galaxy was only visible through something called gravitational lensing, where a massive object — in this case, a galaxy cluster called SMACS 0723 — bends and magnifies the light of galaxies behind it, bringing them forward, and oftentimes creating multiple images of the same target.

That is the beauty of JWST: It can peer into some of the farthest parts of our universe and capitalize on the effects of gravitational lensing, which allows galaxies that are beyond reach for optical telescopes to be brought to the forefront. Galaxies that would be too faint are magnified significantly.

“Because of something like gravitational lensing, these galaxies sometimes get blown up by a factor of 10 to a factor of 100, and they become bright enough for our telescope to actually see and they become stretched out enough for our telescope to resolve,” Iyer said. “And both of those things are happening in the Sparkler. We think that the Sparkler is magnified somewhere between 10 to 100 times, and we’re still working on more precise models of exactly how much.”

Michel Fich, a professor at the University of Waterloo who specializes in star formation, but who was not involved in the study, is intrigued by the paper and what answers it may be providing.

The authors of the paper said they are now going to work more on refining their work, and gather different data from JWST. But they’re thrilled at what the new telescope is already revealing.