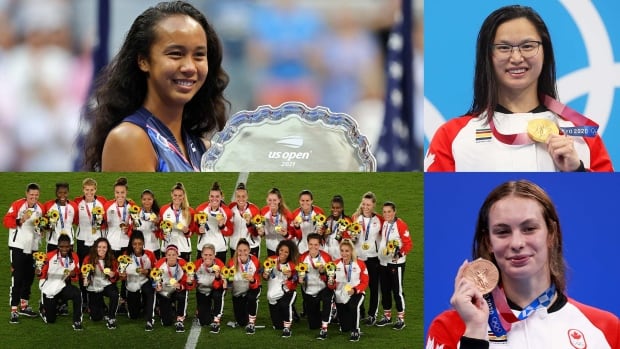 ‘It’s fantastic what they did’: NHLers reflect on banner summer for Canadian women


Pierre-Luc Dubois was in the middle of his workout.

The televisions perched throughout the gym usually show an endless loop of sports highlights from the previous night’s action.

On this August morning, however, the game was live.

And everyone was crowding around to watch the Canadian women’s soccer team play in a nail-biting, edge-of-your-squat-rack Olympic final.

“I get goosebumps thinking about it,” Dubois, a centre for the Winnipeg Jets, recalled last month at the NHL/NHLPA media tour. “I was supposed to do a set, but I was like, ‘Wait.’

“Everybody in the gym was just standing watching the TV.”

Led by legendary captain Christine Sinclair, Canada beat Sweden in a dramatic shootout to capture its first-ever gold medal at the event.

But the heroics of Sinclair, Jesse Fleming, Deanne Rose, Stephanie Labbe and Julia Grosso were just some of the eye-popping performance in a summer to remember for Canadian female athletes.

And like the rest of the country, a number of its NHLers were captivated.

“Amazing,” Ottawa Senators defenceman Thomas Chabot said. “It’s fun to see people have success. It always puts a smile on your face to watch them and see them perform at their best.

Maggie Mac Neil and Penny Oleksiak led the early charge in the pool at the Tokyo Games as women won Canada’s first 13 medals — and 18 of 24 overall. The country then secured a dramatic gold at the women’s world hockey championship on Marie-Philip Poulin’s overtime snipe before teenage tennis sensation Leylah Fernandez came out of nowhere to make the U.S. Open final.

“I was sitting there watching (Fernandez) play and I was thinking to myself, ‘Damn, it’s been a crazy year for Canadian women,”‘ Colorado Avalanche blue-liner Cale Makar said. “It was very cool to see.”

Much like Dubois, Montreal Canadiens centre Nick Suzuki was in the gym as the Olympic soccer drama played out.

“I pulled it up on my phone and there’s like 10 NHL guys watching,” he said. “And then we had to skate, so I brought it into the dressing room and I was late for my skate.

Dubois ranked the women’s soccer final right alongside Sidney Crosby’s golden goal at the 2010 Vancouver Olympics as a “Where were you when?” moment in the country’s sports psyche.

“It’s on that level,” he said. “It definitely is one of those moments a lot of Canadians will remember for the rest of their lives.”

Toronto Maple Leafs winger Mitch Marner said Poulin’s gold-clinching effort on the ice will stick with him after training at the same gym as a number of national team players the last two years.

“It was like 18 months or 19 months that they didn’t play a hockey game,” he said. “They’re always excited to come to the gym and work hard and push each other.

“To see them win the gold and see the work really come into play was amazing.”

Edmonton Oilers defenceman Darnell Nurse — whose sister Kia is on the Canadian basketball team, while cousin Sarah is part of the hockey setup — said the summer showed the importance of women’s sports to the country.

“I’m not saying everything’s perfect,” he said. “There’s still equality and money resources that need to be evened out more between the women’s and men’s sports, but it shows we do take (women’s sports) really seriously.”

“It was a summer for Canadian women’s athletes,” Winnipeg Jets centre Mark Scheifele added. “You just hope that’s a marker for what’s to come.”

Marie-Philip Poulin scored a fantastic goal to give Canada the 3-2 win and their first gold medal at the worlds since 2012. 2:21

“Our Canadian women drove the bus,” the Hockey Hall of Famer said in a recent phone interview. “I’m hopeful that it leads to things like more television coverage of women’s sport or more money paid to professional women’s athletes. It’s great and everybody gets excited, because it is exciting. I hope that there’s actual tangible spinoffs that can propel women’s sport forward from these performances.

“That will be the next test, but it was awesome to watch.”

And while hockey remains her passion, Wickenheiser, who’s both a medical doctor and the Leafs’ senior director of player development, said the soccer final will stick with her.

“I watched it in (Toronto’s) meal room with a bunch of the players,” she said. “We all yelled and screamed and jumped up and down like little school kids when they won.”

Dubois said he hopes the next generation of athletes — girls and boys alike — are motivated by a summer to remember.

“When you win you inspire new people, new athletes,” he said. “Just one summer could potentially find a new Penny (Oleksiak), the new Christine Sinclair, the new Marie-Philip Poulin.

“It’s fantastic what they did for the country.”