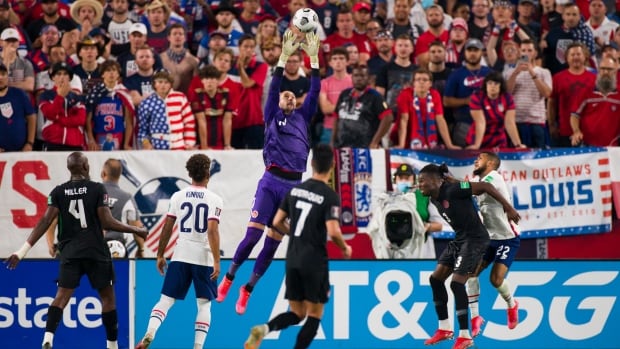 ‘It’s a fight for the top of the table’ as Canada meets U.S. in World Cup qualifier in Hamilton


Canada hosts the United States in men’s World Cup qualifying on Sunday — a clash of the best and second-best teams in CONCACAF, at least by the table’s current reckoning.

At this point in the proceedings, there’s a reasonable, possibly cynical argument to be made that they should settle for a draw in cold, snowy Hamilton, as they did in their first meeting in Nashville in September. Given the shape of the table and the games left to play, splitting the points will leave both in strong positions to advance to Qatar.

“It’s a fight for the top of the table,” Herdman said after training on Saturday, when the wind chill in Hamilton approached minus-25 Celsius. “That’s all I need to say in terms of what this means to us … Canada [is] coming.”

It takes some imagination to think so. More of the Americans are in game shape, members of the biggest clubs in Europe; Canada’s undisputed star, Alphonso Davies, is out with myocarditis, a complication the result of a bout with COVID.

The Canadian men’s national soccer team is gearing up for a 6-pointer at the top of the table against the United States. Win or draw in Hamilton and Canada stay in 1st place and keep their unbeaten record heading into the last game of this World Cup Qualifying period. It’s all to play for this Sunday at Tim Hortons Field. Duane Rollins joins CBC’s Signa Butler to break it all down. 5:32

The U.S. beat El Salvador 1-0 in Columbus, Ohio on Thursday and haven’t had far to travel; the Canadians didn’t arrive home from Honduras until 6 a.m. Friday morning after their own 2-0 win in San Pedro Sula. And with Tim Hortons Field at half-capacity, and the Americans as used to the cold, home-field advantage won’t be as much of a blessing as it might have been.

But there is a question in the frosty air: What’s the value of belief? As hokey as it might sound, there is a buoyancy to this Canadian team, an irresistible uprush of good feeling. They are undefeated through nine games. Jonathan David and Tajon Buchanan both looked world-class against Honduras; goalkeeper Milan Borjan — Hamilton’s own! — has made spectacular saves when his country has needed them most; less heralded teammates such as Sam Adekugbe and Alistair Johnston are playing some of the best soccer of their lives.

“I think there’s been a shift in their mentality,” U.S. defender Walker Zimmerman said on Saturday. “They play with a chip on their shoulder, they play with something to prove. They’re a confident group.”

Right now, the Americans don’t have that same swagger. Despite hosting El Salvador in frigid Ohio, the United States didn’t really connect against the second-last team in qualifying. Yes, three points is three points. “We got the job done,” U.S. head coach Gregg Berhalter said. But it was far from an affirming performance.

If the Americans showed a notable strength, it was their fast, aggressive fullbacks. Antonee Robinson and Sergiño Dest pushed forward not with abandon, exactly, but freely. It’s a modern style of attack—Liverpool’s Jürgen Klopp has many acolytes—but for the U.S., that threat from the back has become more necessity than choice. The more typical American finishers have looked diminished lately, and that was before forward Tim Weah didn’t make it over the border because he’s received only one dose of COVID vaccine.

Christian Pulisic, in particular, has been less than himself. He’s confessed that his love for the game has been sapped, in part because his club career at Chelsea hasn’t been much fun lately. (“It’s been up and down this year for sure,” he said recently. “Not exactly where I want to be, and how I want things to be.”) He’s been shuffled around in the American lineup, too. Dispossessed nine times against El Salvador, his struggle has been hard to watch: a player of his talent and youth, joyless.

Now look back at the Canadians, leaping into snowbanks in Edmonton, or in the celebratory moments after their historic win in Honduras: pure, unabashed ecstasy.

“What an opportunity for these players,” Herdman said. “They’re ready to go.”

Logic dictates, even demands, that Canada will lose at least one of its qualifying matches. No one should be surprised if Sunday’s game proves the one. But logic abandoned these proceedings a long time ago; not much about the Canadian run to World Cup glory has made stone-cold sense. This is a team flush with the best kind of emotion, playing a game mysterious enough to make believers out of anyone. Every so often in soccer, as in life, the usual calculus doesn’t factor.