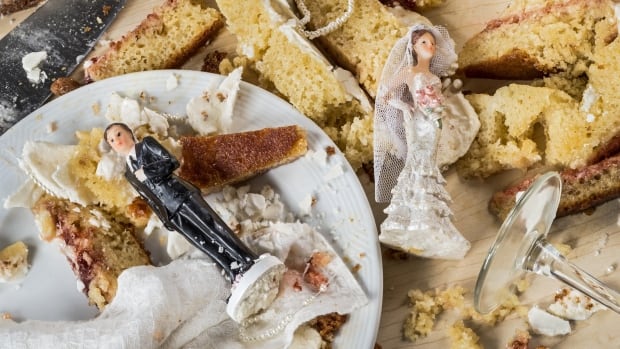 
Vancouverite Thomas thought his love life was going well, but the holidays exposed the harsh reality that things weren’t going to work out with his ex after all.

“It just it feels like my heart was ripped out,” said Thomas, whose name CBC has agreed to withhold in order to protect the privacy of his ex.

The couple separated four years ago after Thomas battled some addiction issues, but had rekindled their romance since the beginning of the pandemic. For the past few months they were living in a happy bubble with their young daughter.

But when Thomas asked her over the holidays if she thought their arrangement could work permanently, she said no. Thomas asked to file for divorce and finally make the split official.

January is known as “divorce month” in some legal circles because of an increase in inquiries about splitting up.

The theory is that couples buck up for one last holiday season with family or the kids, and then head to the lawyer’s office soon after the Christmas tree comes down.

Hoping for a Christmas miracle

For Thomas, the holiday period was definitely a factor in the final dissolution of his marriage.

Other suspected reasons for a spike in divorce inquiries in January include wanting to turn over a new leaf for the new year, or simply waiting until then for tax purposes.

There is little evidence to back any of that up.

Statistics Canada doesn’t compile monthly data on divorce rates, and in some provinces, like British Columbia, most couples have to be legally separated for a year before they can file.

A 2016 study from the University of Washington suggested that peak divorce times are actually in March and August.

But anecdotal evidence of a rise in break-ups in the new year remains strong among practitioners who deal with broken hearts.

Vancouver family lawyer Sonali Sharma knows all about it — she filed her own divorce papers six years ago on Jan. 6.

“I was one of the ‘new year, new me’ people,” Sharma said, laughing.

Sharma hasn’t personally noticed a seasonal spike in divorce inquiries, but she says some lawyers swear that their phones ring off the hook on the first Monday after the holidays.

What Sharma has noticed, however, is a spike of divorces prompted by the COVID-19 pandemic.

“It was one of the busiest falls that I’ve had in years,” she said.

Losing sight of what works

Unlike Sharma, Langley, B.C.-based marriage and family therapist Lawrence Stoyanowski says he has definitely noticed a seasonal trend among his clients.

“I’ve been doing this for 30 years, and January seems to be the month where most people tend to come in and talk about getting divorced,” Stoyanowski said.

He thinks part of the problem is that, for some couples, Christmas is a stressful time that puts them over the edge and prompts them to question their entire relationship.

For those still on the fence, Stoyanowski offers a form of short-term therapy called discernment counselling which helps couples decide whether they really want to go through with divorce.

He says there are times when relationships can be salvaged — usually when couples take more time to hang out together and be less busy.

For those who determine that splitting up would be best, Stoyanowski can counsel them through that as well. He recommends trying to keep matters out of the court system as much as possible, and consider services like mediation instead.

Her firm, Athena Law, offers unbundled legal services like reviewing separation agreements and homemade settlements. She says some couples can also seek help from accountants and financial planners first, which can be a lot more affordable.

“Divorce has really become an interdisciplinary matter,” she said. “You don’t always have to go to a lawyer as your first point of contact when you’re contemplating separating.”