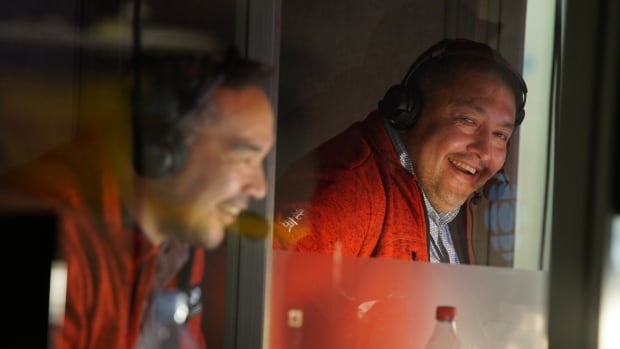 Inuktitut announcers a win for hockey at the 2022 Olympics


As the 2022 Olympics wind down in Beijing, so does a whirlwind of a time for Pujjuut Kusugak and David Ningeongan of Rankin Inlet, Nunavut.

Since the puck first hit the ice for Team Canada on Feb. 3, the Nunavut duo have been announcing all of Team Canada’s Olympic hockey games — men’s and women’s — for CBC’s digital platform, in Inuktitut.

The pair were set up in booths at the CBC Broadcast Centre in Toronto. They’ve sometimes called two games a day, starting as early as 8 a.m. and working as late as 11 p.m., because of the games’ schedule and the time difference between Beijing and Toronto.

For Kusugak, he’s doing it for the youth.

“It really means a lot for us to be able to use Inuktitut to showcase it for all the other people to hear, but also to really encourage other Inuktitut speakers to use our language.”

As for Ningeongan, he’s doing it for the unilingual elders.

“I did it for them just so they can feel they’re part of the community during the events. And so today, to be able to have a national or international audience is a great thing for our people.”

There have been more than 110,000 video views across CBC’s digital platforms for Inuktitut language coverage of Beijing 2022, including Team Canada men’s and women’s hockey games.

He and his family have been watching the games in Inuktitut from their home in Baker Lake, Nunavut.

“Our culture, our language, it’s important to us, and this is an extra step to recognize our language and to listen to and not only have Inuktitut part of the Olympics is nothing short of amazing.”

Inuktitut language advocate and hockey fan, Bernadette Dean, has been cheering from Ottawa.

“Oh, what a gift,” she said. “I think it’s a great step towards the 94 Calls to Action from the TRC. I think four [of] those calls to action are related to our language.

“I see it as a step toward reconciliation and it’s a very positive thing.”

Hockey didn’t come to Inuit communities until the ’70’s and ’80’s, but when it did it became popular pretty quickly, Kusugak said.

He recalled his mom and grandmother talking about how men started hurrying back from spring hunting and fishing trips just to watch games.

It’s also meant coming up with some new hockey lingo.

“For example, icing — sipkutijuq. That was one of the trickier ones,” Ningeongan said.

“I had to ask the public to see what would be the best name for the word icing. And they helped out in giving me that name sipkutijuq.”

Ningeongan credited a number of people in Nunavut’s hockey community — including Kusugak’s late father, Jose Kusugak — who is fondly remembered by many as one of the first Inuktitut announcers at hockey tournaments.

“Definitely I feel his presence and I’m really thankful for him and my mother and my family members for teaching me Inuktitut,” Kusugak said. “Because if it wasn’t for them passing on our language, [I] really wouldn’t be here right now to do something like this.”

A history with hockey

In 2010, Kusugak announced hockey games at the Vancouver Olympics for APTN.

His own hockey career includes playing in a AAA league with the Toronto Red Wings and in the Junior A with the Markham Waxers and Gloucester Rangers, along with coaching local and territorial teams.

Ningeongan is known in Nunavut as a goalie and as a volunteer coach for minor hockey in Rankin Inlet.

In 2019, Ningeongan was the first Inuk to do play-by-play during the Fred Sasakamoose (Chief Thunderstick) National Aboriginal Hockey Championship in Saskatoon.

Announcing for the Olympics — that’s a whole new experience.

“I’ve never had a colour commentator beside me before, and this was really new to me,” Ningeongan said. “But I find it to be so much easier to have Pujjuut beside me because I can take a break between whistles or during the intermission.”

Kusugak said their styles compliment each other.

“David does such a good job with the play-by-play and has all the terms down pat and the way he brings excitement into different plays and goals. And for me to just be able to jump in and add a little bit of detail and things, how maybe the play developed… we’re just trying to have a lot of fun with it wherever we can.”

By the end of the Olympics, Ningeongan and Kusugak  will have announced over a dozen games.

“Well, I think we’re just trying to manage our time, making sure we’re getting the sleep,” said Kusugak.

“We need to put time aside to make sure that we’re putting in our research and game preparations and also making sure that we’re going out for meals together, even taking walks after dinner or something is helping us.”

Kusugak said he and Ningeongan debrief games and talk about how the next game might go.

“We’re trying to have built a routine, so that’s been helping out quite a lot.”

Even though Canada’s men’s team has been eliminated, and the women are taking home the gold, Ningeongan and Kusugak aren’t done just yet.

Listen to David Ningeongan and Pujjuut Kusugak call Marie-Philip Poulin’s golden goal in Inuktitut, which at the time gave Canada a 3-0 lead over the United States in the women’s hockey gold medal match. 0:40

Sask. NDP Leader Ryan Meili to step down, will remain as interim leader until party chooses a successor