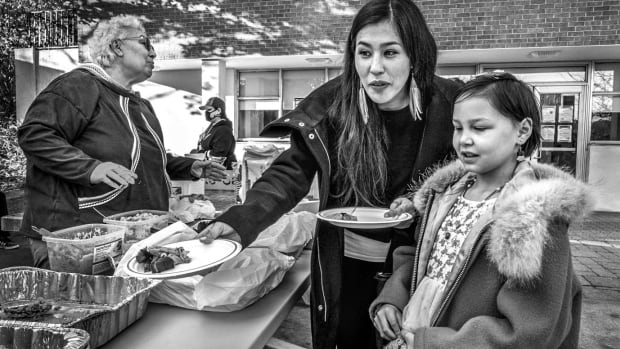 
The first National Day for Truth and Reconciliation in 2021 marked the beginning of a grey seal hunting project and a deep friendship between Yoanis Menge and Ruben Komangapik.

Menge, who lives in the Magdalen Islands, invited Nunavut’s Komangapik to join him on a seal hunt on the islands.

Komangapik remembers the balmy sunny day fondly. He joked it was “like hunting in Cuba.”

Menge says they snapped a picture of themselves in their orange vests as they posed next to their catch of the day. He recalled having to figure out how to caption the image to post online.

“We came up with “recon-seal” as a play of words (a mix of) reconciliation and seal for the animal and so that’s how (everything) started with a word,” said Menge.

Last week marked the start of hunting for the second year of the initiative, with Komangapik and Menge harvesting seal meat from the Magdalen Islands for local organizations to distribute to urban Inuit in Ottawa.

“It’s really, really great because it’s not really an everyday occurrence that we’re able to have access to seal meat and now we are filling the void to be able to have country food,” said Komangapik, who describes himself as a nomad who currently lives in Ottawa.

“A lot of Inuit are being born and raised in the South and they don’t know who they are. And they have an opportunity to rediscover where they’re from with these activities.”

Menge and Komangapik’s paths first crossed in 2012, when their two passions merged.

Menge, a photographer, split his time between the Magdalen Islands and Europe and was returning back home from France with the goal of putting together an exposé on the seal hunt.

“I wanted to be close to the hunters and live with them and to capture the real life of a hunter even when they are not hunting. Because hunting is not just about killing animals and that’s what we forget,” said Menge.

He says that he was just starting to learn to hunt when he met Komangapik, and joined hunting crews across the North. Menge says the photos he released have been published around the world and are in black and white to encourage people to see the beauty of the hunt.

“It’s the first time that something has been published positively about seal hunting,” said Menge, referring to previous campaigns which have portrayed the practice negatively.

Part of the goal of this initiative is to get rid of some stereotypes about hunting and to reconcile with different traditional ways of hunting, says Komangapik.

“We’re just not talking, we’re actually doing the actions of reconciliation (between) the sealing industry, the animalist and all those people that (hunt) the seal the wrong way. They made a big, big rift between the South and the North seal hunters,” said Komangapik.

“We start with that vision of something and we make it real … We’re working every day with our heart.”

He says the hunt is made extra special when he and Menge can exchange knowledge on hunting as they are out on the land.

Inuit artist Aija Komangapik says Reconseal Inuksiuti, a co-operative of Indigenous and non-Indigenous seal hunters who provide country food for Inuit in Ottawa, helps the urban community connect to its roots and aims to promote reconciliation.

“Both cultures have their own ways of dealing with the seal. So the beauty is where we’re taking both cultures to make it happen,” said Komangapik.

He says seal hunting has different regulations in Nunavut compared to the Magdalen Islands, where hunters have to follow a three-step program.

LISTEN | Komangapik and Menge talk about the intiative with Breakaway’s Alison Brunette:

17:25A collaboration between Magdalen Islands seal hunters and Inuit organizations in Ottawa brings fresh seal meat to the community

Reconseal Inuksiuti Project – How art and seal hunting fostered a friendship between a Magdalen Islander and an artist from Nunavut. Their initiative aims to celebrate Indigenous and non-Indigenous hunting practices while offering seal meat to the Inuit population in Ottawa.

Komangapik noted that he and Menge chose to hunt on the Magdalen Islands due to the healthy seal population and because they wanted to avoid taking seals from Inuit in Nunavut.

“There’s a really big food insecurity up there and to take the animals from up there to down South, it’s kind of like taking the food away from the North,” said Komangapik.

It ‘tastes like happiness’: Positive feedback from Inuit in Ottawa

Menage says it’s “beautiful” to see what has come out of this project — helping reconnect Inuit with traditional foods and providing learning opportunities.

“It gives a real contact with the culture, with the food, with what the seal is about,” said Menge.

“We keep the pelts and there’s an educational program that shows younger people with elders how to clean the skins, how to tan it, how to sew.”

After the catch is distributed to local Inuit organizations, such as the Isaruit Inuit Arts in Ottawa, the tender and iron-rich meat can be eaten raw, cooked or even barbecued.

Beverly Illauq, the centre co-ordinator at Isaruit, says “the adage that nothing is wasted by Inuit is true.”

She says food represents an “anchor for cultural expression.”

“We have to realize that there are approximately 6,000 Inuit living in Ottawa … And approximately 60 per cent are homeless,” said Illauq. “Even just the smell of salt air for Inuit is … a centring kind of thing.”

Komangapik says, for him, seal meat “tastes like happiness” and reminds him of his childhood.

“Seal hunting for me, it’s like bread and butter,” said Komangapik. “It has always been my main staple of food.”