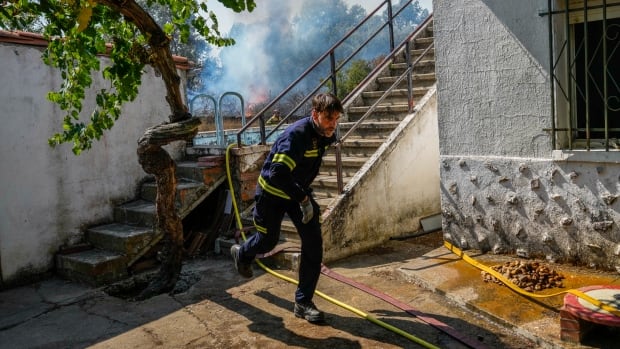 
As record heat waves sweep their way across North America and Europe, a new international project is experimenting with naming heat waves to increase public awareness of their severity.

The Adrienne Arsht Rockefeller Foundation Resilience Center, a Washington, D.C.-based group studying climate resiliency, is running a pilot program to see whether a naming system for heat waves will affect the public’s perception — and actions  — during periods of intense heat.

The World Economic Forum reports that countries all over the world are experiencing record-breaking heat waves this year. Rising global temperatures are making heat waves more common, severe, and lengthy.

“Heat, unlike other natural disasters, is silent and often not seen. Therefore, it’s extra important that we raise awareness around what heat can do, because it’s actually one of the deadliest natural disasters that we face,” said Kurt Shickman, director of extreme heat initiatives at the centre.

“And so that disparity between how dangerous they are, versus how visible they are, really requires branding and it requires more effort to raise people’s profile of this issue.”

The program launched in six cities including Los Angeles, Miami, Milwaukee and Kansas City, Mo., in the United States as well as Seville, Spain and Athens, Greece. In July, Seville was the first city in the world to name a heat wave, calling it Zoe, according to Shickman.

“There was a lot of media coverage around that and a lot of attention paid to that,” said Shickman.

“That’s important, not just for attention to the system, but actually, to get people aware that this is a dangerous time.”

WMO worries about confusing the public

The World Meteorological Organization (WMO), a United Nations agency, said they are supportive of classifying heat waves but are not certain how naming a heat wave works scientifically. The WMO also questioned whether the system could be confusing for the public.

“The most important issue here is that, in most countries, only designated national agencies such as the weather services or public health agencies have a national responsibility to issue official heat warnings,” said Bob Stefanski, head of applied climate services at the WMO.

“We just want to make sure that these independent practices are coordinated, and don’t risk disrupting the civil protection protocols that are already in place,” said Stefanski.

In Canada, some researchers agree with the WMO and are skeptical of how a naming system will communicate the severity of heat waves.

“I’m really, really against it. I think that hearing, you know, the heat wave, Zoe or Joey is about to come your way. It doesn’t really drive fear in my heart. I think that I don’t necessarily pay attention to it,” said climatologist David Phillips. Phillips is a long-time researcher with Environment Canada but shared his personal view with the CBC.

He also pointed out the reason a naming system was developed for tropical storms was for clear communication. Multiple storms can be happening in close proximity, or have the potential to collide.

“But I think with heat waves, I just think there’s so many weather elements that make it up.”

Other Canadian researchers are interested in seeing the data collected through the Adrienne Arsht Rockefeller Foundation Resilience Center’s pilot project to see how a naming system could be an effective communications tool.

“I don’t see a lot of downsides and I think it’s a good idea to try,” said Farah Shroff, an associate member of the School of Population and Public Health at the University of British Columbia.

“The main idea here is to ratchet up the messaging in terms of what a heat wave is and how serious it is.”

Millions of Canadians try to stay cool during heat wave

Five provinces are in the grips of a sweltering heat wave, with experts urging cities to prioritize green space and access to water, to help vulnerable communities cope.

“Really tailoring messages very, very carefully and clearly, in ways that we get to those who are the most vulnerable, so that we, as a community, can all be safe together,” said Shroff.

Should your teens be watching ‘Euphoria’? How to talk about it