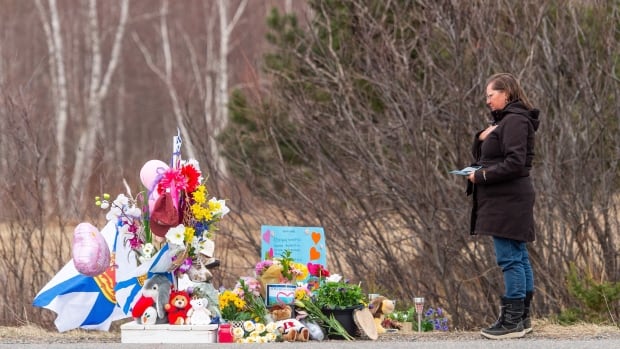 Inquiry into N.S. mass shootings has cost $13M before public hearings have even started


The inquiry examining the circumstances surrounding the April 2020 killings of 22 people in rural Nova Scotia has cost about $13 million so far and public hearings have yet to start.

The provincial and federal governments are sharing the cost of the Mass Casualty Commission that has a mandate to examine what happened when a gunman disguised as a Mountie attacked neighbours, acquaintances and strangers, as well as causes and context leading up to the shootings and arson.

There was significant public outcry in the months following the attacks with calls for an independent, transparent examination of the 13-hour rampage. People questioned what police knew and the steps they took to stop the gunman. Many were outraged that it took more than 12 hours after the first 911 call for the RCMP to announce their suspect was driving a mock cruiser. When the force did so it used Twitter, not an emergency alert that could’ve gone to people’s phones.

But save for a few open houses in affected communities that focused on explaining the inquiry process, the commission’s work has been happening behind closed doors. Public proceedings, originally set to begin last October, have been pushed back twice and already the bill for the inquiry is far larger than other inquiries held in Nova Scotia.

Last week, the law firm that represents 23 people participating in the commission’s probe, including family members and people who were directly impacted, said they were opposed to any further delays.

With the hearings now slated to start in a month — 22 months after the killings — many hope to finally get answers and to start understanding what needs to change to prevent something similar in the future.

Ed Ratushny, an emeritus professor of law at the University of Ottawa who has worked with inquiries as counsel and wrote the book The Conduct of Public Inquiries: Law, Policy, and Practice, said it’s challenging to evaluate the cost of an inquiry without knowing exactly where the millions are going.

But he said the commission’s expenses seem high given that hearings haven’t started. Getting to the public stage as soon as possible, Ratushny said, is important given that “people, the public, are really interested and deserve to know.”

“Sometimes seeking perfection in every detail, you know, could result in the preparation being really a massive dress rehearsal and delay getting on with the show,” he told CBC News.

The Mass Casualty’s mandate is broad and includes looking at how government and police agencies responded, communicated and treated people directly affected by the tragedy in hopes of making recommendations for improvements to public safety.

It also extends to the perpetrator’s access to firearms, any interactions he previously had with police and the role intimate partner violence played in the attacks.

More than 60 people work for the joint federal and provincial inquiry and there are three commissioners.

The commission said the reason for delaying public proceedings until Feb. 22 was that it has been sharing the findings of its year-long investigation with counsel for participants in order to ensure documents that will be presented during hearings are accurate.

But Ratushny said discussing the case with participants confidentially, even with family members and victims, is “sort of the antithesis of a public inquiry.”

Inquiries have to balance, to some extent, the need to confirm non-controversial facts that will speed up the hearing process with maintaining the perception of independence and objectivity, he said.

Breakdown of costs not available

Orders setting up the scope of the commission were signed Oct. 21, 2020. In the months that followed, the commission said it was in the process of securing office space and hiring staff.

They approved granting Chief Commissioner Michael MacDonald a daily rate of $2,000 and a per diem of $1,800 for Commissioners Kim Stanton and Leanne Fitch.

The federal government has approved up to $16.9 million dollars in spending for this fiscal year. The Nova Scotia government has not budgeted a specific amount due to the “evolving nature” of the commission’s work, said Heather Fairbairn, who speaks for the Department of Justice.

So far, the Nova Scotia government has paid $5.9 million for the commission:

The federal government has spent a total of $7.1 million:

The salaries of staff and money paid to commissioners accounted for slightly less than half of the 2020-2021 federal expenses, according to public accounts.

The commission said a full breakdown of expenses for this fiscal year won’t be available until after the end of March.

In response to questions about the costs to date, Emily Hill, senior counsel for the commission, said in an emailed statement “it’s more than halfway through its two-year mandate.”

She said the commission expects the total cost of its work to be on par with other inquiries of similar size and scope but did not offer examples.

The cost of inquiries can range depending on the scope and length and having a joint inquiry can make its work more complex, but recent provincial inquiries have cost much less.

The Nova Scotia Home for Colored Children restorative inquiry, which explored institutional abuse of former residents of the orphanage, was announced in 2015 and issued its final report in 2019 after a one-year extension. The provincial inquiry cost $4.5 million.

The Westray Inquiry, into the coal mine disaster that killed 26 men in Plymouth, N.S., took five years and cost $5 million.

Since 2018, the province has paid $2.8 million for the costs associated with the ongoing Desmond Inquiry — a provincial fatality inquiry probing the circumstances that led up an Afghanistan veteran shooting his wife, mother, daughter and then himself in 2017 at their home in Upper Big Tracadie, N.S.

Adam Rodgers, the lawyer representing Lionel Desmond’s estate, wasn’t surprised to hear about the Mass Casualty Commission costs so far but said it’s “very disappointing” to see how much more money is going toward the joint federal and provincial inquiry.

There are five positions with the Desmond inquiry, including the one commissioner, and with 12 participants, far fewer people are taking part.

Because the Desmond inquiry doesn’t have federal jurisdiction, Rodgers said that has limited its ability to dig into the specifics of the Afghan war and how military actions have affected soldiers. But he said the issues the inquiry is grappling with — post-traumatic stress disorder, mental health, dissociative disorder and the racism an African Nova Scotian faced in both the military and the health care system — aren’t limited to one province.

“So national in scope, big issues that are affecting military veterans all over the country. And yet, a tenth of the budget of the Mass Casualty Commission, which hasn’t had any public hearings yet,” he said. “I’d be very curious to hear an explanation of why the disparity is so great.”

For the past few months, staff with the Mass Casualty Commission have been meeting with lawyers of some of the 61 participants, including counsel for families and police, to go over information compiled in foundational documents that will eventually be made public at hearings.

That didn’t happen in the Desmond inquiry, Rodgers said.

“There was none of this agreement on facts. The facts were to be determined in a hearing as normal through cross-examination and examination,” he said.

Rodgers, who remains counsel in the Desmond inquiry while serving a one-year suspension from the Nova Scotia Barristers’ Society, said working behind closed doors in the Mass Casualty Commission is not in the public interest, when it comes to transparency or cost.

“Has it saved any money? No, it’s probably cost money by additional days of analysis and legal time being spent.”

It’s not surprising that salaries and legal fees account for a large portion of the costs.

There are 61 participants, including police, firearms and and intimate partner violence organizations and the commission provides funding for their legal counsel.

Some staff left high-paying positions to take on a role with the commission. For example, investigations director Barbara McLean is on a secondment from her role as deputy chief of the Toronto Police Service. In 2020, she earned $242,158 and about $17,000 in benefits.

There are at least six other former Toronto Police officers on her team who earned a salary of between $100,000 and $150,000 in recent years.

Some people, including Fitch and Stanton, qualify for travel and living expense reimbursement since they’re not based in Nova Scotia. The commission said about 70 per cent of staff were based in Nova Scotia when they were hired and some work remotely and travel to the province as needed.

On the Canadian government’s website, it acknowledges that past inquiries “have been criticised as taking too much time and being very costly, which takes monies away from other needs.”

It said the costs that must be considered include systems to store all the documents collected.

The inquiry has also commissioned 20 reports from experts in their fields and has been renting space at the Halifax Convention Centre for meetings and hearings.

The Fifth Estate presents a comprehensive inquiry into this year’s mass shooting in Nova Scotia, chronicling 13 hours of mayhem that constitute one of Canada’s deadliest events. 45:10

Businesses weigh options as convoy, other protests set to roll into Ottawa