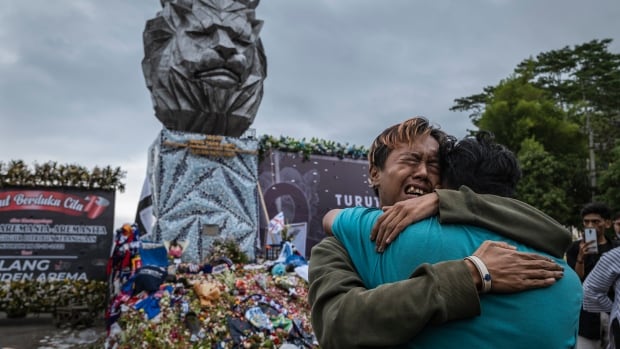 
Indonesia’s president said the country will not face sanctions from soccer’s world governing body after the firing of tear gas inside a half-locked Kanjuruhan Stadium caused a crush at the exits, killing 131 people, including 17 children.

Joko Widodo said FIFA President Giani Infantino wrote in a letter to him about potential collaborations between Indonesia and FIFA and the country will remain the host of next year’s U-20 World Cup joined by 24 countries from five continents.

“Based on the letter, thank God, Indonesian football is not sanctioned by FIFA,” Widodo said in a video posted on the presidential office’s YouTube channel late Friday.

In its security protocols, FIFA advises against the use of tear gas in or around stadiums and recommends exit gates be unlocked at all times during a game. While those rules are considered a safety standard, they don’t apply to domestic or national leagues and FIFA has no authority over how local governments and police control crowds.

Widodo toured the Kanjuruhan soccer stadium in Malang city on Wednesday and said several locked gates had contributed to the disaster that followed a league game between host Arema FC and Persebaya Surabaya on Oct. 1. The national police chief on Thursday said the stadium did not have a proper operating certificate and criminal charges would be brought against six people, including three police officers.

Gaining the right to host next year’s Under-20 World Cup was a major milestone in Indonesia’s soccer development, raising hopes that a successful tournament would turn around longstanding problems that have blighted the sport in the nation, home to more than 277 million people.

The deadly crush at is a tragic reminder, however, that Indonesia is one of the most dangerous countries in which to attend a game.

Since last week, the domestic league has been suspended. Widodo has ordered the sports minister, the national police chief and the soccer federation to conduct a thorough investigation into the deadly stadium crush.

He said on Friday that Indonesian government has agreed to take collaborative measures with FIFA and the Asian Football Confederation to improve stadium safety to prevent another tragedy.

“FIFA, together with the government will set a transformation team for Indonesian football,” Widodo said, adding that Infantino would also to visit Indonesia in the near future.

He said that FIFA will be based in Indonesia during these processes to improve safety standards at all football stadiums across the country, formulate security procedures and protocols for the police based on international standards, take feedback from Indonesian football clubs and fans, regulate season calendar under risk-based considerations as well as to involve experts from various fields for advice.

Queens residents fed up with repeated flooding: “How do I protect my family?”