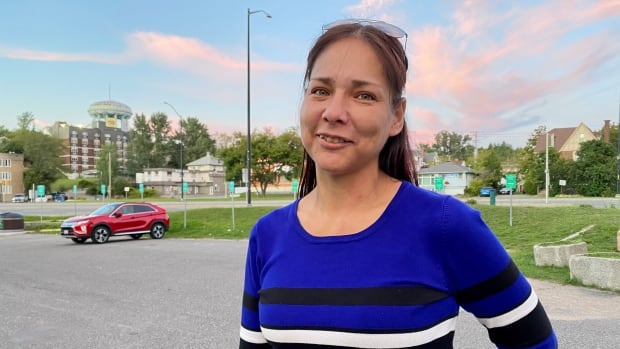 
Jessica Rickard has been in and out of the hospital dozens of times in the past year — often experiencing cold sweats, a bad cough, and feeling weak and sore.

But Rickard said it took months, and multiple visits to Sudbury’s Health Sciences North (HSN), to finally be diagnosed with and treated for bronchitis.

“They would just tell me, ‘Oh it sounds like a cold’ and just tell me ‘there’s nothing wrong with you,’ and send me on my way,” Rickard said.

“There’s not even any words to describe it, really. I don’t go to the hospital unless I know something is actually wrong with me, so to go there and be told that is, I don’t know, very frustrating.”

Rickard said it took showing up with patient advocates to finally have her concerns taken seriously, and get the care and attention she needed. She’s one of several Indigenous patients who say their concerns haven’t been properly addressed at HSN.

‘I was just astounded’

On the day Rickard finally got treatment for bronchitis, she was accompanied to HSN by a volunteer with The Go Give Project, an outreach group that works with vulnerable, mostly unhoused people in Sudbury.

Executive director Evie Ali said she started offering to accompany clients on hospital visits in January this year, after she became concerned some of them weren’t receiving adequate care. She said she’s now at the hospital twice a week on average.

“Very quickly we were able to see … there is a big gap in discrimination and sort of stigma, especially around our Indigenous people,” Ali said.

Ali recalls a patient who had tested positive for sepsis — a serious condition that occurs when the body’s response to an infection damages its own tissues. She said the patient was asked by an on-call doctor, ‘Are you here to shoot up again?'”

“I was just astounded,” said Ali, who has a background in health care, with training as a licensed practical nurse, personal support worker and medical office administrator.

Ali said that client was released without medication. The client returned the next day and received oral antibiotics, but collapsed two days later, and Ali brought him back to the hospital again.

“Finally he was hooked up to the IV, which was what was needed in the first place,” Ali said.

Another instance that sticks out in Ali’s mind was when she recently got a call from a client who was experiencing homelessness and who was being discharged from the hospital at around 3 a.m., but told to return at 9 a.m. for another test.

“He was actually hit by a car and had multiple fractures at this time. It was a complete disgrace to discharge somebody in that condition. Had I been in that condition, they would not have discharged me, and I can guarantee it.”

It kind of made me wish I wasn’t Native.— Trista Whiskeychan, patient

Many of the clients Ali accompanies to hospital are dealing with mental health and addiction issues. She said white clients are “still being stigmatized,” but from what she’s witnessed over the past nine months, it’s clear there’s a “difference in the compound barriers” that Indigenous patients face.

Ali has been keeping detailed notes during her visits to HSN. She said from January to June, she witnessed what she believes is inadequate treatment of 12 different Indigenous clients, some on multiple occasions.

Ali said she emailed hospital CEO Dominic Giroux several times in January, but did not hear back.

HSN said it never received any emails from The Go Give Project. CBC has seen a copy of an email sent from Ali to Giroux, as well as HSN’s corporate affairs liaison, Anne Gauthier, sent on Jan. 25.

HSN communications manager Jason Turnbull said Giroux’s and Gauthier’s inboxes were searched, but no email from that date was found.

HSN declined CBC’s request for an interview. In a statement, the hospital said due to privacy legislation, it could not comment specifically about any patients. It said it takes “complaints related to discrimination very seriously” and is “dedicated to providing a culturally safe environment” for patients, visitors and staff.

In the statement, the hospital said that in June this year, all senior executives, administrative and medical directors began an eight-month training program focused on Indigenous cultural safety. The monthly sessions are led by an elder. The hospital said similar opportunities are being offered this year to all staff from two medical departments and will be expanded next year to other parts of the hospital.

As of last month, HSN said it has received four complaints in 2021 related to “discrimination based on Indigenous status.”

I have seen real effort from HSN and other health-care players in Sudbury to recognize what racism against First Nations looks like, and put in place programs and supports that make sure that racism is not part of the treatment. Is it always a success? No. But I can tell you I have seen the effort.– France Gélinas, NDP MPP, health critic, Nickel Belt

Nickel Belt MPP and NDP health critic France Gélinas says there are “longstanding” issues of what she calls systemic racism in health care — including at HSN — but she has seen improvements over the years.

Gélinas has served as the NDP health critic for 14 years, after working for 25 years in health care.

“I have seen real effort from HSN and other health-care players in Sudbury to recognize what racism against First Nations looks like, and put in place programs and supports that make sure that racism is not part of the treatment. Is it always a success? No. But I can tell you I have seen the effort.”

Gélinas said health-care programs run by local First Nations, as well as the Shkagamik-Kwe Health Centre, have made a big difference and reduced the number of complaints she hears.

Patient refuses to return to hospital

Trista Whiskeychan is one of those “unattached” Indigenous patients. Originally from Moosonee, she has been living in Sudbury for six years and doesn’t have a family doctor.

Whiskeychan has spent a lot of time at HSN, but feels she often hasn’t received appropriate care. She said her concerns have been brushed off and attributed entirely to drug use.

She said on top of living with addictions, she feels being Indigenous adds an extra layer to the stigma she faces in health-care settings.

“I guess in way … it kind of made me wish I wasn’t Native,” Whiskeychan said.

Whiskeychan said she had a physical altercation with a nurse earlier this year, after which she decided not to go back to HSN — even on an occasion when she clearly needed medical attention.

“I was getting really yellow and I didn’t bother going. And I was like having sharp pains in my liver. I just said no I’m not going back there, not with all that.”

Quinn Towegishig has also avoided going to the hospital when he needed medical care.

Towegishig said when dealing with a recent blood infection, he only received additional testing he had asked for after he went back with an advocate from The Go Give project.

Ali and other Go Give members met with Gélinas and Sudbury MPP Jamie West in early June. After that meeting, Gélinas said she brought her concerns to Giroux, the hospital’s CEO.

Ali has been working with clients to encourage them to file formal reports about their experiences, which the hospital will follow up on.

She said it’s difficult to do, given the myriad other challenges her clients are facing — but a few reports have now been submitted and they’re waiting for follow up.

She hopes “small things will create progress as we go.”

Meanwhile, she and other volunteers continue to accompany patients to the hospital, if they want support.

“I’m not saying that we are a solution to the problem, because I certainly don’t think that that’s the case, but for now, more people are getting adequate treatment than before, I do believe.”