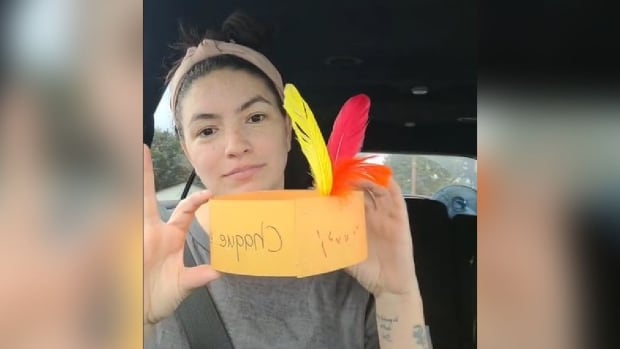 
A Lytton First Nations mother has received an apology after she posted a TikTok video about a headdress that her son was asked to craft at a preschool in Coquitlam, B.C.

Samantha Sinclair posted the video last Thursday, a day before the National Day for Truth and Reconciliation, and it has since gone viral, attracting more than half a million views.

Sinclair says she made the video “in shock” in her car after she picked up her son from the French immersion preschool.

In the video, she shows the headdress, which is made of a cardboard base and synthetic feathers. The words “Chaque enfant compte” (“Every child matters”) are written around the base of the headdress.

“This was their craft for Truth and Reconciliation Day — a headdress,” Sinclair says incredulously in the video.

She told CBC News all the children — who were wearing orange clothing for Orange Shirt Day — came out of the preschool wearing headdresses, and other parents agreed with her that it was “wildly inappropriate.”

“My son was very proud of his craft,” she said. “It was very difficult to tell him that he’s not allowed to wear it and he doesn’t understand why, because he’s three.”

Indigenous headdresses are, in most cultures, gifts and something that has to be earned. Many non-Indigenous people have come under fire for appropriating them.

“A lot of the comments on the TikTok that I got were, ‘well, I did this when I was a child,'” Sinclair said.

“Things have changed. The world has changed.”

Sinclair, who has residential school survivors in her family, said she wants to break “cycles of trauma” with her son by educating him and changing what he’s taught.

She also said the timing of the craft lesson — particularly the day before Orange Shirt Day but also a month before Halloween, where headdresses are still worn as costumes despite criticism — made trying to “normalize” their use in a school environment very disappointing.

Promise to do better

Mila Banfield, a co-owner of the school, apologized to Sinclair the next day.

“This just proves how much we need to learn and unlearn,” Banfield told CBC News. “I had no idea that I was so ignorant.”

Over a phone call, the two talked about how Indigenous culture could be incorporated into the school’s curriculum, Banfield said.

“Our journey to find truth is, we have to start connecting with Indigenous cultures and people,” she said. “We don’t know what we don’t know yet.”

Banfield said she hopes to bring Indigenous leaders into the school in the future, and said she wanted to apologize not only to Sinclair, but also to all Indigenous peoples.

Sinclair said there are many appropriate ways that teachers can mark the National Day for Truth and Reconciliation.

“It’s important that people know the difference between appropriation and appreciation. We want to break these stereotypes,” Sinclair said.

A mother from the Lytton First Nation in Coquitlam, B.C., says she was in disbelief after her son was sent home with a headdress craft made on the National Day for Truth and Reconciliation.

U.K. government makes U-turn on plan to cut taxes for the rich to fight inflation