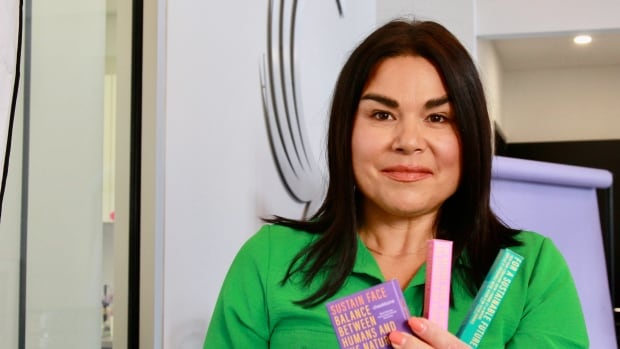 
As a young girl, Jenn Harper visited the Toronto Eaton Centre many times.

Although she loved shopping, Harper, who is now the CEO of Cheekbone Beauty, based in St. Catharines, Ont., said that “some of the things I remember were racism, like, people accusing us of stealing.”

Harper, who is Anishinaabe, is a member of the Northwest Angle #33 First Nation in Kenora, Ont., on the western edge of the province.

Today her heritage is at the core of her cosmetics line, with sustainability a key feature.

“In five years, we went from being in a corner in my basement to being in Sephora Canada,” she said, referring to the major beauty products retailer. “That’s pretty wild.”

Past suspicious store clerks take note: Cheekbone will be in 50 Sephora stores across the country by early next year. Its products are already stocked in 15 of them, including at the Toronto Eaton Centre, and it hits the shelves of JC Penney stores in the United States this fall.

The journey from $500 to 7 figures with Cheekbone Beauty

Jenn Harper, the founder and CEO of Cheekbone Beauty, talks about how she hopes her success convinces investors to support other Indigenous entrepreneurs.

The company is one of roughly 60,000 Indigenous businesses in the country, according to the Canadian Council for Aboriginal Business.

Best known in such sectors as fishing, forestry and other resources, Indigenous entrepreneurs are moving into non-traditional sectors like fashion, IT, marketing and transportation. According to experts, that expansion is a key component of economic reconciliation, and the development of new business opportunities will benefit not only First Nations communities but all of Canada.

The National Day for Truth and Reconciliation, which is marked on Sept. 30, is dedicated to reflecting on the painful legacy of Canada’s residential school system and honouring the children who died, as well as survivors and families.

But reconciliation also involves business, as outlined in No. 92 of the Truth and Reconciliation Commission’s 94 calls to action.

A path to a $100B Indigenous economy

From her office in Victoria, Carol Anne Hilton said she sees a “powerful explosion of indigenous entrepreneurship” taking place all over Canada.

“It’s amazing to watch,” said the CEO and founder of the Indigenomics Institute and an adviser to business, governments and First Nations.

A Hesquiaht woman of Nuu-chah-nulth descent, Hilton has an international MBA and has written a book on economics and First Nations called Indigenomics: Taking a Seat at the Economic Table.

Hilton predicts that the Indigenous economy could quickly surge to $100 billion a year in Canada if governments and corporations made changes to their policies and business practices to be more inclusive and engage with First Nations companies in such areas as procurement, trade, investment and social finance.

Entrepreneurs play a major role in the Indigenous economy by providing growth opportunities but also by creating a new cultural narrative, Hilton said.

Decades of economic isolation on reserves and unemployment among many First Nations people in urban areas means that a vision of Indigenous potential and prosperity is rarely seen.

Laying out the path to a $100-billion Indigenous economy “establishes a way to see ourselves in our own future,” Hilton said.

For Teara Fraser, the founder and lead executive of Iskwew Air (pronounced ISS-KWAY-YO), entrepreneurship is an option that suits both her skills and her spirit.

“It’s not an easy pathway, but there’s a lot of liberty,” said Fraser, who is Métis and started her airline in 2018 offering charter and cargo services.

In August, the company, based at Vancouver International Airport in Richmond, B.C., celebrated its first anniversary of scheduled flights to Qualicum Beach Airport on Vancouver Island.

With two planes and a growing team, Fraser said running her own business has uplifted her family and her community.

She also recognizes how she is representing success.

“The concept of see it to be it — it can change everything when our narrative changes.”

Cheekbone’s Harper has had the same powerful feeling.

She was back at the Toronto Eaton Centre this summer, launching a new product line at Sephora.

Her favourite part of the day occurred when an Indigenous girl was perched in one of the store’s makeup chairs.

Harper helped the young customer apply some blush. Talk then turned to the girl’s own dreams and plans. She said she believes the little chat could be a big deal if it helped the girl see that becoming a business leader was possible.

“When I was a kid, I could never imagine ever that even being a possibility for me,” she said.

Financing is fuelling the growth of Indigenous entrepreneurship, and Hilton said new investment channels focused on First Nations business are a critical part of reconciliation.

As an example, she points to Raven Indigenous Capital Partners, which has offices in Vancouver and Ottawa.

The firm says it takes an “Indigenous culture-centred approach to impact investing” and was the key early investor in Cheekbone Beauty.

Raven just announced its second funding round, with plans to provide $75 million in financing for Indigenous businesses.

A new micro-loan program, the Women Entrepreneurship Loan Fund, was also launched by the National Aboriginal Capital Corporations Association (NACCA), this month.  A network of more than 50 Aboriginal Financial Institutions (AFIs) — which are Indigenous controlled and community based — NACCA says it’s provided $3 billion in loans to 50,000 small and medium-sized businesses owned by First Nations, Métis and Inuit people over three decades.

Another funding opportunity comes with Bears’ Lair, a TV show much like CBC’s Dragon’s Den in which all of the contestants and judges are Indigenous. It debuted earlier this month on the Aboriginal Peoples Television Network.

The combination of money and the growing momentum of First Nations entrepreneurs gives Hilton hope that the Indigenous economy is on a roll and will overcome the colonial history of exclusion.

“Economic inclusion is everything,” she said.