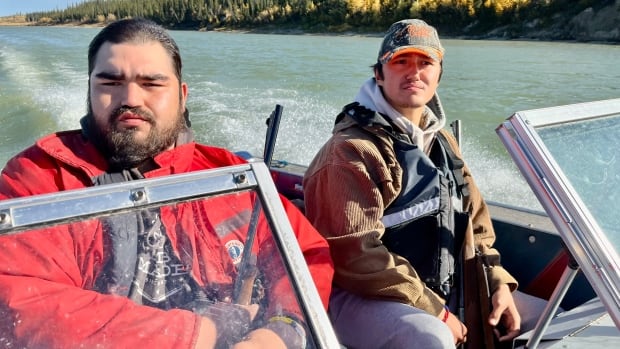 
On a clear crisp morning in northern Manitoba, John Henderson III and Drayden Jobb launch a single-engine boat from the Conawapa boat launch in Gilliam into the waters of the Nelson River, to pull the net they set overnight to catch sturgeon.

The two young men, both in their 20s, are from the Fox Lake Cree Nation, whose people have been hunting alongside the river and fishing it for generations.

“The mighty Nelson,” Jobb says as the boat makes its way from shore.

The water stretches as far as the eye can see when looking up or down the river. On each side, the high banks are blanketed with rows of tall green trees.

Henderson, who is piloting the vessel, knows the river at every point — shallow or deep, choppy or calm — like the back of his hand, except perhaps for how wide it stretches from bank to bank.

“I’m not even sure … about Polo Park to Boston Pizza” he says with a huge laugh, referring to local landmarks in Winnipeg — a city more than 700 kilometres to the south of Fox Lake.

As they speed down river, they recall a long list of men — dads, uncles, and elders — who took them out on the water and into the bush early to teach them traditional practices of hunting, fishing and trapping.

Henderson says he learned what he knows from his dad, John Henderson II, who died in 2009.

For Jobb, it was his stepfather, Ryan West.

“That’s my dad — raised me since I was a kid. He’s taught me everything I know.”

Many young Fox Lake men, including Jobb and Henderson, also point to lessons they learned from Elder Robert Beardy, who died just recently.

Elders like Beardy have had to be deliberate about passing down the knowledge they received from previous Fox Lake Cree generations, owing to the rapid changes in the landscape of the community, following the introduction of hydroelectric dams along the Nelson.

The town of Gilliam was also created as a community for workers who service the mammoth structures.

Not only did the dams alter the course of the water, the tall power lines trudged through long-established traplines and hunting grounds, and the town displaced many Fox Lake community members from their homes, resulting in a community scattered across the province.

‘A thick line of sturgeon’

As they pull their net, Henderson and Jobb seem to see how the effects of the dams continue to impact people of their generation.

Henderson and Jobb cut the line to the net they came to pull. Henderson smiles, saying the line feels “heavy.” Jobb checks it and feels it violently twitching. It could be a monster of a fish.

Energized with anticipation, Jobb stands atop the bow and begins to heave in the net. With every pull the net seems to get heavier. Jobb gives it his all.

Finally, he makes a mighty pull — and up pops a stick.

They’ve caught massive sturgeons before, but not today.

For Henderson and Jobb’s generation, empty nets are proof of what elders have said about the devastating impact of the dam on their way of life.

Jobb says he remembers Beardy describing how abundant the sturgeon population was before the dams were built.

“He was telling me that …you could see them and you can go up and touch them and there’d  just be just a long, thick, thick line of sturgeon — like, it looked like rock, but it was just sturgeon, nothing but sturgeon. And now you can’t see that,” Jobb says.

Back at the boat launch, Henderson and Jobb pack their boat with supplies to head back on the river to spend two weeks in the bush hunting a moose for their community.

Jobb says they know the river has changed. The dams and hydro poles have affected the abundance of wildlife.

He knows it may be harder than ever to keep traditions alive, but he says the fact that they’ve stuck to it so far just just shows how tough their community is.

“Nothing’s gonna stop us — you can put up 10 dams. It ain’t gonna stop us from getting out on the river and still providing food for our families and our elders and communities,” says Jobb.

They say they see it as their duty to pass on knowledge to others, as it was passed on to them.

Jobb immerses his two young daughters where he can, especially the older, now six years old. He provides her with experiences he modifies to keep her safe, but which are still authentic enough to kindle a passion, he says.

“She loves it. I love it — passing down knowledge to my babies, just the way I was brought up.”

Henderson is now taking over Fox Lake’s youth trapping program from Jimmy Lockhart, one of the older men who taught him and Jobb some of what they know.

In the program, Henderson teaches the youth everything from building traps for martens and lynx to working with their catch — including stretching and drying the hides, and then selling their fur. The young people get to take home their earnings.

Living near the Nelson River means Henderson and Jobb must interact with the town of Gillam and Manitoba Hydro — forces Henderson says they heard horror stories about from elders who were there when the dams were being built.

“It’s good to know the stories in the past, but we can’t live in yesterday. You can only look for tomorrow,” Henderson says.

He says that’s why he and Jobb are out on the river and teaching younger kids.

“You can’t live on yesterday. You gotta keep moving forward.”

Beer shortage? A nationwide carbon dioxide shortage could raise the price of brews