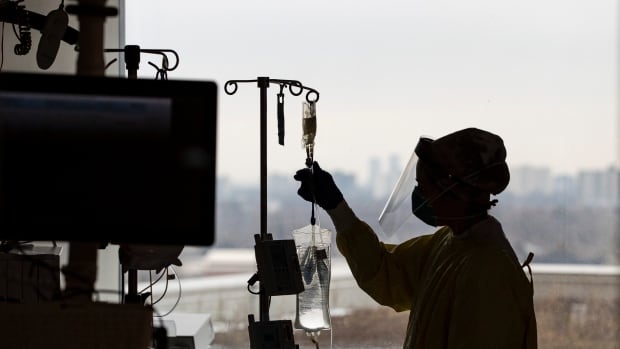 If Omicron is mild, why are so many people dying in Ontario?


While Ontario’s rate of new COVID-19 infections appears to have slowed from its record peaks, the daily death toll in this Omicron wave is still on the rise and approaching a level as high as any point in the pandemic.

There are also no signs that the death rate is slowing down. Scientists expect Ontario’s daily reports to continue to trend upwards into February, even after the province begins easing COVID-19 restrictions on Monday.

During the third week of January, the most recent week for which full figures are available, Public Health Ontario recorded an average of 52 COVID-19 deaths per day, a rate only exceeded at the peaks of the first and second waves.

The mounting number of deaths raises questions. If Omicron is a milder version of the novel coronavirus, why are so many people dying, and what’s going on with the effectiveness of vaccines?

The answers are found in the sheer numbers of people getting infected by the Omicron variant, says Tara Moriarty, an infectious disease researcher and associate professor at the University of Toronto.

“We’re seeing scales of infection that we have not seen in the entire epidemic to date,” Moriarty said in an interview. “There are going to be a lot of deaths, even if the virus is half as severe [as previous variants].”

Public Health Ontario’s official count of COVID-19 deaths so far this month has already exceeded 1,000. Given the lag between the day that a death occurs and its entry into the provincial database, this puts January 2022 on track to be one of the three deadliest calendar months of the pandemic.

The Omicron variant “has likely infected more people in five weeks than all of the rest of the pandemic combined,” said Leis in an interview.

“By virtue of so many infections, even a milder severity will translate into a significant number of hospitalizations and deaths, and that’s what we’re seeing now.”

Among those dying are some people who had been vaccinated against COVID-19. However, that is not proof that the vaccines aren’t working.

“Without the high level of vaccination that we have in Ontario, it would have been far worse,” said Leis.

There’s substantial evidence from around the world showing reduced rates of death and hospitalization among vaccinated populations. There’s also fresh Ontario-based research demonstrating the effectiveness of vaccines against severe health outcomes specifically from the Omicron variant.

The new study, which is yet to be peer-reviewed, found that having three doses of a vaccine is about 95 percent effective in preventing hospitalization or death from the Omicron variant, while two doses are 80 to 85 per cent effective, said Dr. Jeff Kwong, senior scientist with ICES, a research institute focused on health issues in Ontario.

“Death rates are far higher among those who are unvaccinated compared to those who are vaccinated,” said Kwong in an interview. The research also shows the importance of getting a third-dose booster, he added.

Both Kwong and Moriarty expect that Ontario’s daily and weekly death numbers will continue to rise into February.

“Given that we think the peak for cases may have been earlier in January, it might be another week or two before we see deaths going down,” said Kwong.

Experts in infectious diseases and epidemiology also believe Ontario’s true COVID-19 death toll in the current wave is actually higher than the official count. That’s because new provincial rules strictly limit eligibility for testing, a move that could mean some COVID-19 deaths are not being recorded as such.

It all leads to the possibility that the actual number of COVID-19 deaths in Ontario’s current wave could eventually exceed the numbers in either the first or second waves.

Officially, Ontario reports the number of people who die “with” a confirmed case of COVID-19. This particular wording has prompted some skeptics to cast doubt on the death toll numbers, claiming that people who did not actually die “from” COVID-19 ae being counted.

These skeptics claim that people killed in car accidents or dying of other unrelated causes are being counted as COVID-19 deaths because they happened to have tested positive.

That’s a complete myth, says Moriarty. The Public Health Agency of Canada has directed provinces not to include deaths that are unrelated to the virus in their pandemic fatality counts.

If anything, the official number of COVID-19 deaths counted by Ontario and most other provinces is an underestimate, according to research led by Moriarty.

“We have missed a lot of COVID deaths, and we almost certainly are missing many now,” Moriarty said, as a result of Ontario’s recent restrictions on who can get an official PCR test for the virus.

“If you die with COVID, even if it looks like COVID, smells like COVID, everything … if they don’t have a positive test, they will not be reported as a COVID death,” she said. “We know this is a very significant problem.”

Ontario officials are trying to establish whether it’s Omicron, the previous Delta variant, or a combination of the two driving the current increase in deaths, says Ontario’s Chief Medical Officer of Health Dr. Kieran Moore.

“In the first several weeks of January, we’re confident that a significant proportion of [the deaths] were from Delta,” Moore told a news conference Thursday.

Genetic sequencing to determine the type of variant that caused a COVID-19 infection takes several weeks.

Essentially 100 per cent of outbreaks in the community are Omicron right now, but roughly 10 per cent of hospital admissions are still “relevant to Delta,” Moore said.

He said he is trying to refine Ontario’s death reporting process to make clearer if each fatality is caused by or associated with COVID-19. Ontario is also planning on doing a “selective review” of death certificates and documented deaths to assess the quality of the data.

As well, Moore said, he will be looking at “all-cause mortality” to see if the province’s reporting structure is missing deaths that could be associated with COVID-19.