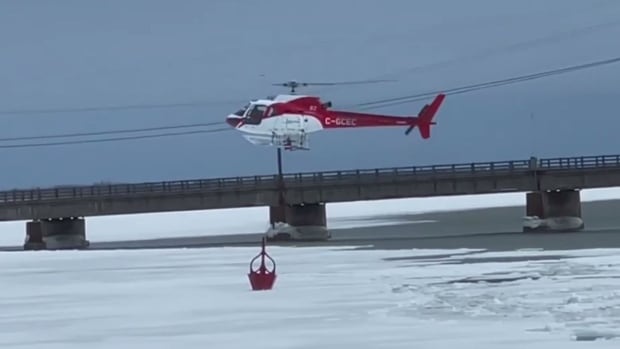 Heavy steel picks were dropped onto the ice from a helicopter to help loosen the Gulf of St. Lawrence ice.

Quebec company Hélinovations was hired for the project, which was conducted from the Shippagan wharf.

“The benefit is getting our boats in the water as soon as possible,” said Joel Gionet, president of the Acadian Crabbers Association.

He said getting out to sea earlier would reduce the number of interactions with endangered North Atlantic right whales.

The snow crab industry in northern New Brunswick received $2 million over three years in 2019 to test a series of initiatives that could reduce the risk to the right whales.

The project will also take place in Caraquet.

“We just wanted to give it a try,” said Gionet.

He said the idea was first brought to him in February and fishermen in the region were keen to see if the system worked.

Gionet said he’s unsure whether the pilot project was successful and believes the ice was too thick to break.

Hélinovations used the tool last year to reduce flooding in rivers in Quebec, but this is the first time it used the system in New Brunswick.

Gionet said sea water has a different density than freshwater, which may be why the ice didn’t seem as easy to break.

Helinovations will file a report on the project and what exactly was accomplished.

Gionet said the crabbers association will use that report to decide over the next few months whether to use the same technology next year.

From Whitehorse to Whitecaps: Yukon soccer player set to suit up for first pro game in Canada