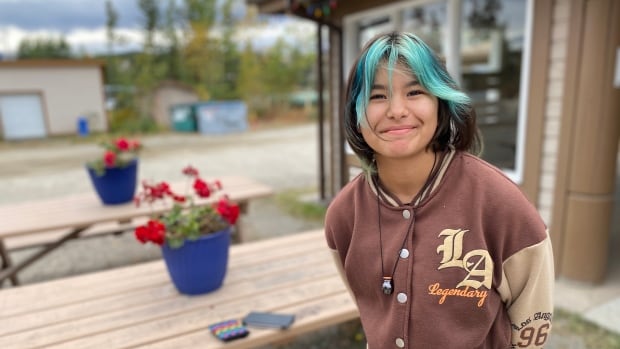 ‘I was really homesick’: Some northern students travel far from home for high school


When Angelina Arrowmaker was ready to start high school in 2017, she and her mother packed their bags and flew 195 kilometres south to Yellowknife.

They made the move because the school in Arrowmaker’s home community of Wekweètì, N.W.T. — with a population of about 110 and only accessible year-round by air — does not offer classes past Grade 10.

Arrowmaker is one of dozens of students in the North who move far from home each year to attend high school.

Students can finish high school in 22 of the territory’s 33 communities. Schools in eight of them, however, do not offer classes beyond Grade 9, while two only offer classes until Grade 10.

Arrowmaker said she grew up surrounded by friends and family, and it was difficult to move to the city. Her dad chose to stay behind in the Tłı̨chǫ community, but visited them in Yellowknife.

“Wekweètì is my home. But ever since I moved, even going back, it just feels different,” she said. “It’s never going to feel the same as it was before.”

Arrowmaker found it hard to make friends in Yellowknife because her classmates had known each other for years. She also initially struggled in math class, failing her first test, because of differences between the school systems.

Despite the challenges, Arrowmaker said moving to the capital was a good choice because it allowed her to learn at her grade level.

That can be difficult in many small communities, she added, as classes can be a mix of students from different grades.

‘As warm as possible’ student residence

Enterprise is the only community in the N.W.T. that doesn’t have its own school. Instead, students there are bused to Hay River, about 39 kilometres away. All the communities without high schools are small, some with fewer than 100 people.

To the west in Yukon, fewer than a handful of schools don’t offer classes after Grade 9. Students across that territory can access Grade 10 to 12 courses online, but not everyone has internet at home.

Students who move from smaller communities to Whitehorse for high school can live at the Gadzoosdaa Student Residence, which houses about 30 youth from Yukon and northern B.C.

“For some students, it’s really difficult leaving home and being away from their family and that’s why we really try to have as warm as possible an environment for them,” said Mike Snider, director of the residence.

Students are provided counselling, tutoring and help getting a part-time job. A partnership with the Yukon First Nations Education Directorate also offers cultural activities, such as beading and drum making, as well as foods like moose and salmon when available.

“You get used to it after awhile, like the constant travelling. Two hours starts to feel like half an hour.”

In Nunavut, where the last residential school closed in 1997, students can finish high school in the classroom in every community.

The Department of Education offers distance learning for courses not offered at every school.

Across the North, students can face unique challenges such as high turnover of teachers and principals, inadequate housing, cultural barriers, lack of access to reliable, fast and affordable internet, and the legacy of residential schools and intergenerational trauma.

The Grade 12 graduation rate in N.W.T. in 2021 was 60 per cent across the territory and 45 per cent for small communities. In Yukon, it was 74 per cent territory-wide and 65 per cent in rural communities that same year.

In 2016, fewer than 48 cent of people aged 25 to 64 in Nunavut had a high school diploma or equivalency, compared with 86 per cent across Canada.

For northern students who graduate high school and want to go to college or university, they often require academic upgrading.

A 2019 auditor general report found Nunavut’s education system had barriers that made it difficult for students to succeed academically and move on to post-secondary education and employment.

Efforts are underway in all three territories to improve.

For students who pursue post-secondary education, many must leave the North.

Arrowmaker, who’s now in her second year at Simon Fraser University in Vancouver, studies biomedical physiology and plans to work in health care. She said she found it hard moving so far away from family.

Yukon University is the only university north of 60 in Canada after it transitioned from Yukon College in 2020. Aurora College in N.W.T. is becoming a polytechnic university, while Nunavut Arctic College is the only post-secondary school in the easternmost territory.

“When students come to us, they’re trying college out for the first time,” said executive director Lynn Kilabuk. “Because it’s a smaller school, you get a little bit more one-on-one attention.”

Kilabuk said the curriculum, focused on Inuit culture and history, helps give students a sense of pride and self-awareness.

This story was produced with the financial assistance of the Meta and Canadian Press News Fellowship.