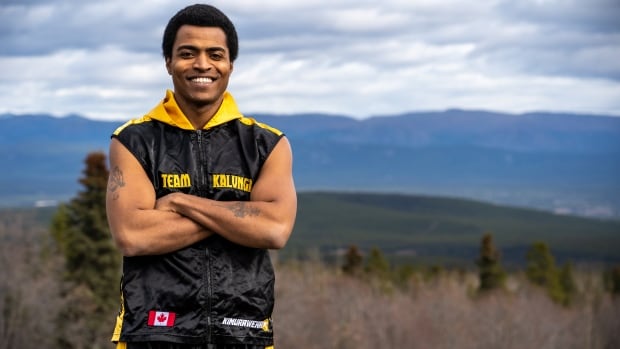 ‘I want that glory’: Whitehorse boxer fighting to bring the sport back to Yukon


Mponda Kalunga is a fighter in every sense of the word.

He first fell in love with boxing when he saw Mike Tyson knockout Francois Botha on TV at the refugee camp in Tanzania where he grew up.

“Seeing how this moment literally made everything stop … the good and the bad, just for this moment that … always stuck to me,” he said. “That’s the feeling. I want that glory.”

Kalunga’s search for glory has been a long one.

He was born in Alexandria, Egypt, which is why he boxes under the name The Egyptian Prince. He started boxing at age 16 after he moved to Newfoundland as a child, and became a pro-boxer fighting out of Toronto before the pandemic hit.

For almost two years, he has been living and fighting out of Whitehorse, sometimes commuting over 5,000 kilometres just to get to fights.

Kalunga is ranked second in his division in the country, according to Box Rec, and is on an eight-fight winning streak. Right now, he’s up for a Canadian Super Welterweight title, and if he wins it would be his first.

He’s also working with his team to organize a professional title fight in Whitehorse. If he’s successful, it would be Yukon’s first professional boxing match in over 100 years.

“This is where I feel I must spend the rest of my life, and I feel like this is an introduction to the people,” he said of the territory. “This is where my heart is.”

‘Very hard to train at a national level’

Kalunga is the first professional boxer to fight out of Yukon in decades.

To properly train for fights, he flies down to Ontario one month in advance just to make sure he gets in time at a proper gym. He even sleeps at the gym, just to save time.

“It’s a lot of work. It’s harder. But it’s welcomed, so I’m not going to complain. I’m not gonna make excuses … I’m very lucky to do that, and I’m grateful,” Kalunga said.

He does admit it’s a big challenge with so few resources for the sport in the territory.

Yukon Boxing, the territory’s amateur boxing organization, hasn’t had an official training facility since Peak Fitness closed down during the pandemic.

Jess Staffen, a past president and head coach for the organization, was involved for over 30 years.

“Just logistically … we found that even for amateur boxing it’s very hard to train at a national level in the Yukon because you need competition and lots of it,” Staffen said.

Staffen is excited about Kalunga’s efforts to bring a professional match to Yukon.

About 10 years ago, he said, Yukon Boxing tried to do the same thing, but they ran into some barriers.

“We were informed that would need some legislative changes, and the establishment of a Gaming Commission in the Yukon,” he said. “We weren’t encouraged to push the event.”

Kalunga and his team are coming up against similar challenges that ultimately boil down to Canada’s Criminal Code.

Section 83 says anyone who engages in a prize fight is guilty of an offence punishable on summary conviction.

There is an exception for boxing contests held with the permission of a commission or similar body recognized by the province or territory’s legislature.

But Yukon doesn’t have a boxing commission.

Ranj Pillai, the territory’s minister of Economic Development, has been in touch with Kalunga’s team about organizing the event.

He said his department has been looking through the legislation to see what needs to be done to host a professional match.

“It could actually be pretty a significant undertaking,” he said. “It’s based on the legislation that’s been in place for, you know, decades.”

Pillai said it is too soon to say how long any legislative changes could take.

Kalunga’s team is hoping to hold the match as soon as this spring.

History in the re-making

If they’re successful it would be a historical event.

Yukon was once an international hub for professional boxing, during the early 1900s in Dawson.

John Firth, a historian who wrote Yukon Sport: An Illustrated Encyclopedia, said the Dawson City boxing club was known as one of the best in the world during the gold rush.

“It’s the oldest organized sport in the Yukon,” said Firth. “They had a facility that was capable of seating 5,000 people, which in those days was pretty impressive.”

One of the first major fights was in 1898 between former Commonwealth Champion Frank Slavin and a bartender in Dawson City named Frank Harvey.

The fight was meant to go 18 rounds but only lasted for six, because the audience members started fighting to the point where the boxers turned to watch them brawl instead.

Some major names came to Dawson City to make their fighting careers.

Jack Twin Sullivan came to the Klondike to fight, leaving three months later to go on to become the World Middleweight boxing champion.

Joe Choynski, who was later known for beating heavyweight champion of the world Jack Johnson, also fought in Yukon.

Big name promoters worked the Klondike too One of them was Tex Rickard, who went on to build Madison Square Garden.

Then the gold rush ended, so too did the glory days of professional boxing in Yukon.

Kalunga hopes that bringing a title fight to the territory will bring people together again to enjoy the sport.

“It’s like so meaningful for me … everything … my life from the refugee camp, starting there and coming here,” Kalunga said.

“Let’s make it an occasion. Historical. Something that Whitehorse will remember.”