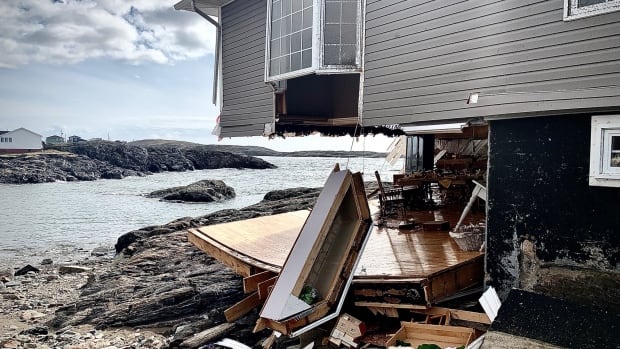 I reported on a hurricane that left Port aux Basques in ruins. Here’s what I saw


I got the call on a Wednesday afternoon.

CBC meteorologist Ashley Brauweiler would be in Port aux Basques for Fiona, our boss, Scott Lunn, told us. I picked up rain gear, made sure my camera battery was charged, and packed a lot of extra socks.

Ashley and I landed in Deer Lake the next morning. As we drove, she explained what a storm surge was — the actual, scientific definition. It’s not just when waves arrive, she said, vibrating with tension as she gripped the wheel. It’s when a major storm picks up a lot of water and carries it along with it, dumping that water wherever it lands. Raising the ocean levels.

In this case, she said, brow furrowed, it could be bad.

We got into Port aux Basques on a foggy morning, barely able to see what lay ahead. The town’s mayor, Brian Button, met with us right away, eager to ensure people knew what to do when Fiona hit. He told us he’d been trying for funding to strengthen the town’s weak spots, but the province hadn’t yet approved the applications. He was calm on camera, but when we stopped rolling, I could see how nervous he was.

Troy Turner, one of CBC’s reporters on Newfoundland’s west coast, knew a lot about the town. He drove us around, explaining which parts might be hit worst by the surge. I marked them on Google Maps, and later went back, knocking on doors to meet the people at the forefront of that threat. They, too, looked afraid.

Troy’s cousin, Mandy, happened to be walking along the Grand Bay beach that day. A former editor of the local paper, she happily obliged when I asked for her number, and kept me up to date during the storm. Just one example, for me, of why local news matters deeply for Canadian communities: Mandy knew everyone, her finger on the pulse of Port aux Basques. She pointed me to the town’s fishermen, who spent the next morning with me, showing me around the wharf.

I woke up to the wind pummelling our hotel. We were out before dawn, staring out in shock at the ocean as it swelled and raged. I’d reported through a record-breaking blizzard in St. John’s: the wind felt similar, but the sea was something else entirely.

By 8 a.m. we were at town hall, stopped by the encroaching storm surge from venturing any further. Seawater had flooded the only road to downtown. A woman nearby was sobbing, panicked, frantically looking for her son. Police cars and fire trucks whipped past. Everyone was evacuating, some in their pyjamas, carrying pets and backpacks. I was getting texts about an apartment building being destroyed by waves.

A little while later, we heard someone had been swept out to sea and was missing; other people said she was in hospital. After a few phone calls it was clear at least two people had been taken by the surge, and only one had survived.

Amid all of this — a veritable emergency, the wind howling, Fiona still bearing down — people in the town picked up their phones, terrified but keen to help in any way they could, sharing whatever they knew.

The next day, those same folks wandered around the ruins of their homes and neighbourhoods, shell-shocked by the decimation, some openly weeping, gathering in the debris-littered streets to comfort one another. Some couldn’t bear to talk on camera, but nobody turned us away; we were outsiders, but we were welcomed.

I met with René Roy, who runs Wreckhouse Press, a few hours later: he, too, made time for us, despite his phone ringing off the hook. He filled us in on what he saw that day, then took us to a neighbour he thought would speak to us. That’s where we met Simone Hennehan, waist-deep in bags of clothes she salvaged from her neighbour’s house, lovingly wiping the seawater from his tools and bikes so they wouldn’t rust. He was still in shock at the hotel, trying to rest, she said.

That, to me, epitomized the entire tragedy. Port aux Basques wasn’t just a collection of houses, a port, or a fishing community. It was one big family.

For the next few days, those types of encounters repeated themselves. I met Brian Osmond, who goes by “Smokey,” who told us in the pouring rain how he’d managed to crawl out of the sea and save his life, all while surrounded by the remains of his beautiful home by the shore. I met another man who’d saved a couple who were visiting from Texas. Volunteer fire crews waited patiently as we shot video and guided us through the most dangerous areas. A family who had lost everything described the horror of picking through rubble, finding pieces of their lost treasures. All of it raw, authentic, human. At one point I returned to our van after an interview, sobbing.

On our last night, as the people of Port aux Basques continued cleaning, we met Norma Simms. Norma had opened her house to two of our reporters who had nowhere else to stay, and insisted on getting up at dawn to cook them breakfast and pack their lunches for the day. She invited four of us for dinner that night: chicken, rice and vegetables, with a rhubarb crumble for dessert. Norma, like every single person I’d met in the past week, wanted to take care of us — to make sure we felt at home.

I touched on that feeling in one of my television scripts, but it deserves repeating. Fiona scarred Port aux Basques. The storm tore lives apart and took one away entirely. But as it always does, the news cycle will move on. The politicians will leave. The army will depart.

The people of Port aux Basques will still have each other.