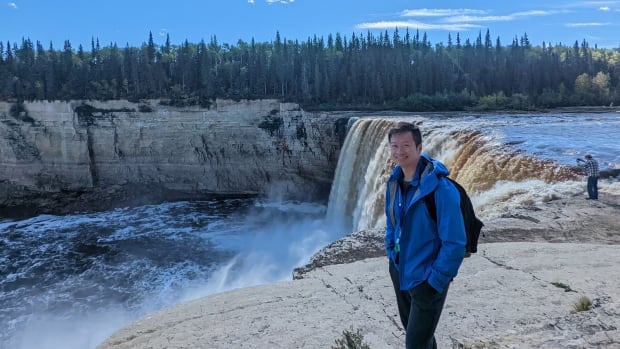 
This First Person column is written by Dr. Anthony Fong, who worked as a locum in Hay River, N.W.T., for two weeks. For more information about CBC’s First Person stories, please see the FAQ.

In May, when massive levels of snowmelt caused unprecedented flooding and an evacuation of the town of Hay River, N.W.T., it was no surprise to me that the Canadian Red Cross (CRC) was deployed to support evacuees.

But in September, as an emergency physician for the CRC, I didn’t expect to be sent to Hay River to respond to a different kind of crisis — a crippling shortage of family doctors that left the town with no full-service emergency room for more than two months. This situation is fast becoming a stark reality across Canada.

Perched on the quiet southern shore of Great Slave Lake, Hay River has a population of nearly 4,000. The local health authority also serves another 6,000 people who live in its surrounding catchment area.

The region has enough work for at least five full-time doctors. Currently, it has none.

Last year the main problem was covering health-care workers who had to self-isolate at home due to COVID-19. This year, it’s burnout.

Over the summer, a combination of seasonal absences and country-wide shortages left the town scrambling for backup. As a result, several organizations were asked to help recruit locums — temporary health-care staff — for the territory. The Red Cross was among them.

For many, this was the longest time without emergency care in recent memory. Local staff told me previous closures had been only a few days long at most.

To cope with the shortage, a nurse practitioner saw minor emergency cases during the day while sicker patients required phone calls to the emergency room doctor on call in Yellowknife.

Over the course of the summer, residents who needed stitches would have to drive five hours to Yellowknife just to get them. Others chose to leave the territory for care — the closest 24-hour emergency room was a three-hour drive south in High Level, Alta.

But for many, there’s no substitute for immediate, in-person care.

The day I arrived, a man was shot in the chest and survived — thanks in part to the actions of two locum doctors who had arrived just the night before.

While I was not involved in his care, I know that patients with this type of injury usually require a physician to insert a tube to drain blood or air from the chest that may be compressing their lungs. This must be done before the patient is put on an air ambulance to Edmonton; altitude can worsen the injury.

Another night in the emergency room, I saw a woman in her 20s with an early pregnancy who was suffering abdominal pain. Using ultrasound — a skill that most emergency physicians have — I was able to see that her pregnancy was in the uterus and spared her being flown to Yellowknife to rule out ectopic pregnancy, a potentially life-threatening condition.

Meanwhile, at the Hay River Regional Health Centre’s family practice clinic, my schedule slowly filled up for the week. Many patients were surprised to see a doctor in town once again and I was more than happy to relieve them from their health-care limbo.

When people don’t have regular access to primary care, their health problems accumulate and worsen. By the time they are able to see me, the likelihood of a brief, single-reason visit — common just 15 years ago when I graduated — is exceedingly low.

One by one, each patient gave me a laundry list of concerns: hernia, diabetes and medication refill; pelvic pain, foot pain and attention-deficit disorder; anxiety, depression and inflammatory bowel disease. Each item was worthy of its own appointment.

As a doctor meeting patients for the first time, I spent much of the 15-minute appointments acquainting myself with their past medical histories — a step that family doctors can skip — and I was often left with just precious seconds to formulate a plan and counsel them.

With only a handful of nurses and nurse practitioners to keep the clinic running over the summer, there was also a backlog of Pap smears to do, implantable birth control devices to replace and blood work to check — some of it left over from the spring.

The frustrations of Hay River residents are perhaps best described to me by Audrey Berens who underwent breast cancer surgery in Edmonton over the summer. The 64-year-old said she was afraid to come back home without a doctor in town.

“This doctor situation — it’s terrifying … Like, a friend of mine had a breast cancer infection. It wasn’t caught soon enough and she died.”

As I got back on a plane to Vancouver after my two weeks in Hay River, I couldn’t help but wonder whether it’s time we treated disparate emergency room closures across Canada as what they truly represent — a national public-health emergency that requires extraordinary solutions.

Want to write for CBC North? We welcome pitches for 500- to 700-word essays or opinion pieces that may be of wide interest to our audience, and you don’t have to be a professional writer. Read more here or send your pitch to northfirstperson@cbc.ca.