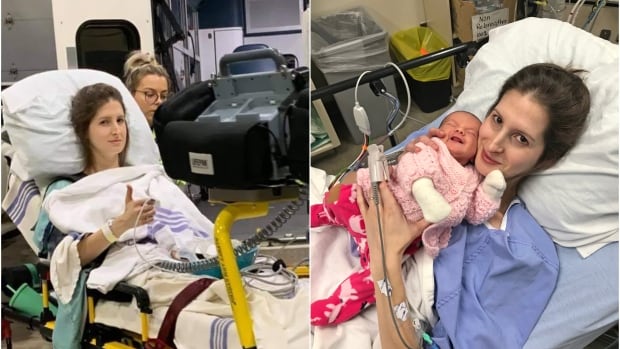 ‘I don’t know if I’m going to wake up’: Mothers share stories of pregnancy-related complications


Pregnancy, childbirth and new motherhood are supposed to be joyful times in a woman’s life, but things don’t always go as planned.

Over the course of an investigation into maternal health, CBC interviewed nearly 70 women who either came close to dying or suffered lasting trauma during pregnancy or in the months immediately after.

Many said they felt instinctively that something was wrong, but were told by health-care providers what they were experiencing was a normal part of pregnancy. Sometimes they didn’t seek treatment because they were afraid their symptoms would be dismissed.

Five women chose to share their stories in hopes of encouraging other expectant mothers to advocate strongly for themselves if they think something is wrong.

The Current19:35Grappling with maternal death in Canada

Maternal health experts say that many deaths related to pregnancy in Canada are preventable, but what’s needed is a reliable system to collect and share information on maternal deaths and close calls. Matt Galloway talks to Tara Carman, a senior reporter with CBC’s national investigative unit, about a CBC investigation into the problem.

Nine days after her third child was born, France Contant was sitting in her rocker nursing when she started having chest pain.

“My husband saw that my whole upper body just kind of like, turned red, as if someone had a pink roller and painted me,” she said, describing what felt like an elephant jumping on her chest.

“Right then and there, I realized something really bad is happening.” When her arms went numb, Contant called to her husband to grab the baby.

“I can’t feel my arms,” she recalled telling him. “I’m probably going to drop her.”

The doctor on call happened to see Contant with her newborn and noticed that she also had high heart enzyme levels. “It was like a light switch,” Contant said.

The doctor was familiar with a rare type of heart attack caused by postpartum hormones known as spontaneous coronary artery dissection, or SCAD.

Contant endured a harrowing four-hour ambulance ride through a snowstorm to Subury’s hospital to see a cardiologist. Several days later, doctors sent her to the Ottawa Heart Institute. There, she suffered a second heart attack, and underwent bypass surgery.

Back in the day, you know, people passed away and unfortunately it was … kind of expected. But in this day and age, I think we need to do better.– France Contant

“I’m told that my heart was black, and when they did the bypass, my heart turned bright red,” Contant said.

“That doesn’t normally happen. Usually black means that the muscle is dead and like it’s not going to come back generally. But in my case … my heart has done super well.”

Through sharing her experience, Contant has met friends and family of women who have died of different pregnancy complications, something she says taught her how important it is for women to advocate for themselves.

Deaths from pregnancy complications “happen more than you realize,” Contant said. “Back in the day, you know, people passed away and unfortunately it was … kind of expected. But in this day and age, I think we need to do better.”

It was Stephanie Geerlinks’ first pregnancy, so she wasn’t sure what to expect. But as she passed the halfway mark, her blood pressure was high. Her face was so swollen her lips kept cracking, and her fingers were so swollen she couldn’t close her hand.

“I was like, ‘I think this is not normal.’ But what do you do?” Geerlinks told CBC. “I talked to my OB’s office already.”

Doctors monitored Geerlinks, ordered her off work and gave her medication to bring her blood pressure down, but it remained stubbornly high.

One night at around 29 weeks, she had severe abdominal pain, which she chalked up to indigestion. But the next morning she became concerned when her urine was brown and went to hospital in Woodstock.

There, she was told she had HELLP Syndrome, a severe form of the blood-pressure disorder pre-eclampsia, which had affected her liver. She needed to deliver the baby as soon as possible, they said, and sent her to a hospital in southern Ontario.

HELLP syndrome dramatically reduces platelet levels, which makes it difficult to clot and increases the chances of a woman having internal bleeding during her pregnancy or childbirth.

Geerlinks’ platelets were dangerously low, so doctors induced labour, hoping for a natural birth. But every time Geerlinks had a contraction, the baby’s heartbeat became undetectable. An emergency C-section became the only option.

As she watched the doctors prepare to put her under, Geerlinks remembers praying she would survive.

Geerlinks survived, and so did her son, Dominic.

She also had a silent abruption, where the placenta detaches from the uterus, disrupting the flow of nutrients to the baby and causing heavy bleeding. There were no signs, she said, until it was too late.

Her story is painful to share, but Geerlinks wants to be open about what she went through so other women know what to watch for.

“Other countries have shown they can make improvements,” she said. “We need to step up our game, really, and look after moms better so that we aren’t losing moms and we aren’t losing so many babies.”

At first, Nikki Bakes thought the heavy, gassy feeling in her chest was because she’d eaten beef for dinner, something she rarely does. But when she collapsed on the bathroom floor, her fiancé, Brandon Carter, called 911.

Paramedics arrived and quickly determined Bakes was having a heart attack.

On a stretcher in the back of an ambulance, Bakes made sure Carter packed her breast pump since she was still nursing their four-month-old son, Mitchell, who was asleep upstairs.

But then she passed out and Carter was left standing alone at the end of the driveway as the ambulance sped off.

“At that moment … it really clicked, in that this isn’t just Nikki fainting. This is quite literally Nikki dying,” he said.

Bakes’ heart stopped in the back of the ambulance and paramedics had to resuscitate her three times en route to the hospital.

I am sure that there are unfortunate mothers who pass away because of SCAD, but by the time they get to a hospital they’re unfortunately long gone.– Nikki Bakes

She had suffered a rare type of heart attack known as spontaneous coronary artery dissection, or SCAD, that is linked to postpartum hormones.

Bakes had surgery to repair the artery and has made a full recovery, but she’s keenly aware of how lucky she is to have survived.

“What if Brandon hadn’t been home? What if it had happened while I was in bed, asleep?” she asked.

“I am sure that there are unfortunate mothers who pass away because of SCAD, but by the time they get to a hospital they’re unfortunately long gone.”

Marina Simba is a nurse by profession, so she became increasingly worried about extreme fatigue and heart palpitations during her first pregnancy.

Still, she was grateful to have made it to 39 weeks, at which point she was induced.

After her labour failed to progress she says she asked multiple times for a C-section. Doctors advised against it.

“Then I heard them say, ‘Let’s try forceps,’ ” she recalled. “It was like I was in a movie and no one told me what was happening.”

Baby Abigail was born at a healthy weight, but Simba wasn’t doing well. The doctor told her they would need to come check the packing. “I was confused,” she said. “What packing?”

I heard them say, ‘Let’s try forceps.’ It was like I was in a movie and no one told me what was happening.– Marina Simba

Unbeknownst to Simba, she had lost a lot of blood during the delivery and doctors had to use gauze to pack around her cervix and birth canal to control the bleeding.

She spent the next week in the hospital and needed blood and iron transfusions.

Weeks later, she was still in pain and couldn’t control her bladder or bowels, so she saw a uro-gynecologist.

“I was told I needed to do self-catheterization,” she said. “The doctor acted like it should be no big deal since I was a nurse. But how could it not be? I’ve never done this to myself before. It was pretty traumatic.”

It’s been two years since the birth of her daughter, and Simba has had to go on long-term disability due to incontinence. She has since changed careers and continues to see specialists.

“It’s like having two golf balls sitting in your vagina all the time. It affects everything.”

Simba never thought she would stop building her family after just one baby, but the thought of another birth is terrifying.

“At this point, everything in my life has changed. I don’t know what we’ll do.”

Kelsie Morris was excited when she found out she was pregnant with her first baby in June 2021, but having a baby during the pandemic worried her.

“It was kind of isolating and scary,” she told CBC. “I didn’t want to tell anyone right away because I was nervous something would go wrong since there was a lot of uncertainty.”

Morris saw her family doctor regularly and was sent for ultrasounds, but she never had any appointments with an obstetrician.

At 26 weeks she started to have back pain and couldn’t sleep, so her mom urged her to go to the hospital.

“I figured I was overreacting because this is my first pregnancy,” remembered Morris, “but I decided to go anyway.”

The doctor did a physical exam, which showed Morris was already two centimetres dilated and in preterm labour. She was transferred to a hospital in Ottawa and underwent an emergency c-section.

I kept asking if this was something I had caused or done. No one ever gave me any answers or reasons for it. I was told, ‘It just happens.’– Kelsie Morris

Baby Sage was born weighing two pounds and spent 11 weeks in the NICU.

“I kept asking if this was something I had caused or done. No one ever gave me any answers or reasons for it,” Morris said. “I was told, ‘It just happens.’ ”

She eventually came to learn that her blood had been mixing with the baby’s blood in utero and that may have caused the early contractions.

But Morris says she still has questions.

“I wonder if this would have been caught earlier had I been cared for by an obstetrician and not just my family doctor. Would they have been able to see this on an ultrasound?”