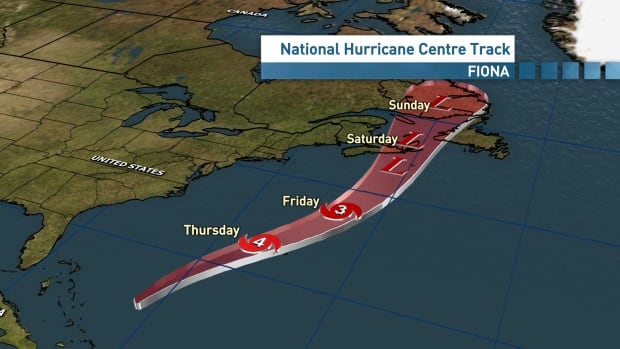 
Hurricane Fiona has the potential to be a severe storm for parts of Atlantic Canada this weekend.

The hurricane will track northward and into the Maritimes late Friday and Saturday as it transitions to a post-tropical storm.

That post-tropical transition does not mean the storm will be weaker, but its structure will change. It will grow in scale and cover even more territory.

While the “cone of uncertainty” is still quite large, it’s narrowing each day. Forecast models continue to project landfall over Cape Breton or the eastern mainland of Nova Scotia.

While some uncertainty remains with the track and other details, the potential impacts are becoming more clear.

Rain will arrive well ahead of Fiona. A cold front moving in from the west will bring its own rain on through Thursday and into Friday and then begin to tap into moisture from Fiona.

The heaviest rain is expected as Fiona tracks through on Friday night and into Saturday.

The prolonged heavy rainfall will bring the potential for flooding, especially along and to the left of the track. Rainfall amounts in those areas could reach 100-150 millimetres, or even more.

With the storm growing in scale, very strong winds are expected across a large area. With the trees in full leaf, the power outage potential will be high.

Widespread gusts of more than 100 km/h are likely across central and eastern Nova Scotia, Cape Breton, P.E.I. and western and southwestern Newfoundland. In these areas, gusts could exceed 130 km/h, especially in exposed coastal areas.

Even in areas further to the west, gusts exceeding 70 km/h look possible.

Storm surge is also likely. The impact will be highly dependent on the track and timing of the storm and how it coincides with high tide. Stay tuned for more details.

It’s time to prepare. Those in the path of the storm should make sure their emergency kit is ready to go and their propane tank is topped up. Check that your downspouts and storm drains are clear and make sure your sump pump and generator are in working order.

Atlantic Canada is bracing for the impact of Hurricane Fiona as the Category 4 storm heads north.

With a fall brawl looming in Parliament, some MPs hope for a more civil session