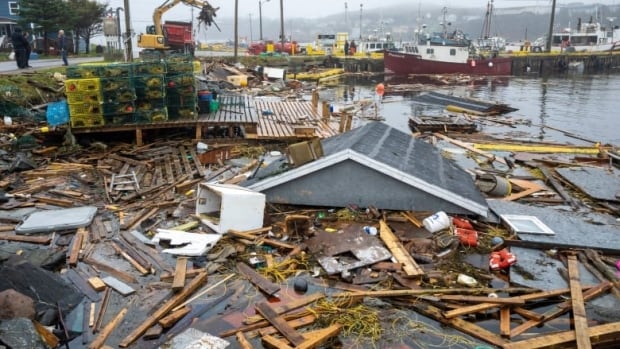 Hurricane Fiona is among 10 most expensive climate disasters worldwide: report


A new report published by Christian Aid, a charity based in the U.K., pegged Hurricane Fiona as one of the 10 most expensive climate disasters this year.

According to the study published Monday, Hurricane Fiona, which bulldozed across Atlantic Canada as a post-tropical storm in September, caused more than 25 deaths, displaced 13,000 people and cost nearly $4 billion Cdn in damages.

Based on insurance industry estimates, the report listed the 10 most expensive climate disasters in 2022. Hurricane Ian in the U.S. and Cuba topped the list, and the floods in KwaZulu-Natal and Eastern Cape in South Africa, along with Fiona, are at the bottom.

“If rich countries like Canada take action on mitigation, so getting carbon emissions down… what you will see is that the bill for loss and damage is kept under control,” said Patrick Watt, Christina Aid’s CEO.

Watt says if wealthy nations don’t help with adaptation efforts in poorer countries, the costs of extreme weather events will start to add up.

“The danger is if we get runaway climate change, then the loss and damage that results from extreme weather events is going to become completely unaffordable and we’ll see more of the world becoming uninsurable,” he said.

He predicts there will be more unprecedented events like Hurricane Fiona.

“The insurance industry in Canada and abroad has been very vocal that climate change is not a future threat. The events are happening now and we’re not ready for them,” Stewart said.

“It’s very important, obviously, to focus on emission reduction and to reduce the threat in the future, but that’s no excuse for ignoring the threat that we’re already experiencing today.”

Some damages couldn’t be quantified

Watt says the report also highlighted a second set of climate disasters that couldn’t be financially quantified in damages, due to a lack of data.

He cites the current drought in East Africa, for which there isn’t an insured cost, but is estimated to be affecting 36 million people going hungry in Somalia, Kenya and Ethiopia.

“The poorest countries, those that have done the least to contribute to the climate crisis, are the ones in many cases who are being worst affected in terms of human lives,” said Watt.