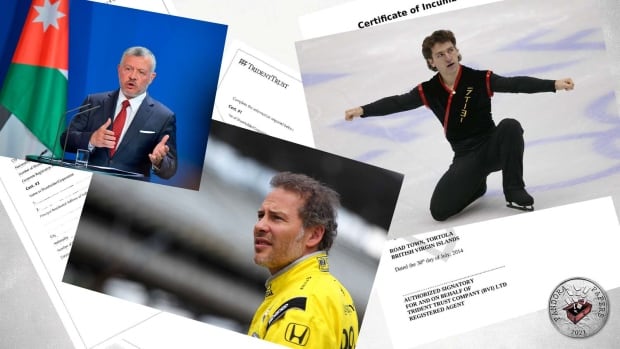 
The offshore fortunes of prime ministers, royalty, billionaires, athletes and celebrities are being laid bare in a giant new leak of tax-haven financial records, even bigger than the Panama Papers, revealed today by a global consortium of media outlets.

The leaked files, dubbed the Pandora Papers, show 35 current or former world leaders and more than 300 other public officials around the globe who have held assets in or through tax havens. Former British prime minister Tony Blair, the current prime ministers of the Czech Republic and Kenya, and the king of Jordan have all benefited from the anonymity or tax advantages of their offshore holdings, the records reveal.

The 11.9 million files — consisting of everything from emails to bank statements, incorporation documents and shareholder registries — are from 14 firms that provide offshore services, and were leaked by a confidential source to the Washington-based International Consortium of Investigative Journalists. The ICIJ has provided access to the files to 150 of its partner news organizations around the world, including CBC/Radio-Canada and the Toronto Star in Canada.

So far, the CBC and the Star have identified the names of at least 500 Canadian citizens or residents in the records.

Much like the Panama Papers leak in 2016 or the Paradise Papers the following year, the secret files provide a behind-the-scenes glimpse at how certain global elites — or in other cases, high-profile criminals — take advantage of financial wizardry or opaque corporate structures to either shield assets, wriggle out of their tax obligations, or hide wealth entirely.

After the Panama Papers came to light five years ago, world leaders, including U.S. President Barack Obama and British Prime Minister David Cameron, repeatedly pledged to crack down on such tax abuses and to clean up the murky world of offshore finance. But the new Pandora Papers show that the global offshore world, while chastened, continued to thrive in recent years.

“When we published the Panama Papers a few years ago, there was a lot of outcry around the world saying that this was a system that needed to end,” said Gerard Ryle, the ICIJ’s director. “But we’re now seeing the very people who could end the system … themselves benefiting from it.”

There is nothing inherently illegal about having an offshore bank account or company, as long as it is properly declared to tax authorities, and plenty of major businesses operate overtly and legally in and through tax havens. However, the anonymity provided in offshore jurisdictions, coupled with their minimal or non-existent tax on income, also makes them a magnet for money launderers, tax evaders, corrupt politicians and other criminals.

The leaked files contain details on hundreds of offshore companies and accounts set up by or for Canadians. Here are some of the most prominent names.

The only Canadian to ever win a Formula 1 championship, Villeneuve lived a life of luxury in Monaco and Switzerland during most of his racing career, but lived in Quebec for a period in the 1990s and from 2007 to 2013. The Pandora Papers show he had offshore companies set up in zero-tax jurisdictions from the start of his career, back in 1992. They were set up to receive racing and endorsement income.

The karate-chopping figure skater won hearts with his edgy Olympic performances and world championship wins, but the money from his success wasn’t bad, either. The leaked files show Stojko transferred Canadian assets worth up to $6.5 million into an offshore trust in the Caribbean in 2007, while he was living in Mexico. Skate Canada, an organization that receives public funding, signed off on the transaction. Stojko told CBC News that he relied on his lawyer to handle his finances, and had “no real involvement or interest” in any of it. “When my longtime lawyer recommended that I set up a trust … I did not question his advice, and I trusted him to act in a manner which was both in my best interests and in compliance with the law.” Skate Canada declined to comment.

The Quebecer is currently serving a three-year sentence in a Connecticut prison after pleading guilty last year in the U.S. to conspiring to launder money, via his and his brother’s unlicensed online payment platforms Payza and AlertPay. The Pandora Papers show that just as the investigation into the Patel brothers was hitting its full stride, Firoz Patel flew to the United Arab Emirates where he acquired an offshore company. From prison, Patel said the corporation was set up legitimately to do business in Asia and had nothing to do with Payza.

The alleged criminal mastermind behind the dark web marketplace AlphaBay — an online bazaar for buying and selling drugs, guns and stolen credit card info — amassed a fortune worth about $29 million, according to U.S. authorities. The Pandora Papers show for the first time how he used a network of shell companies to obscure his ownership of various assets, including luxury homes.

Cazes died in 2017, a week after he was arrested. It’s believed the Trois-Rivières, Que., native took his own life while in custody.

Sharp’s Vancouver firm, Corporate House, was known as the go-to investment outfit for wealthy Canadians wanting to keep assets hidden and use offshore havens to minimize their taxes, sources in the wealth management industry told the CBC in 2016. Not surprisingly, Sharp was revealed that year as the most frequently named Canadian in the Panama Papers leak.

The Canada Revenue Agency began auditing him and a number of his associates right after. Nothing much has come of it yet — at least in Canada — as Sharp and co. filed dozens of lawsuits to block the CRA’s efforts. South of the border, however, Sharp’s machinations caught the eye of the FBI, and he and a couple of clients were charged with securities fraud in August. He’s less prominent in the new Pandora Papers leak, which mainly shows his firm doing routine administration of offshore companies. Sharp did not comment in response to questions from CBC News and the Toronto Star.

CBC News will report in depth on some of these cases, and other Canadian names, in the weeks ahead.

Outside of Canada, the prominent names in the leak include eight sitting presidents and three current prime ministers. Some of them had already declared their offshore assets, while for others, such as Kenyan President Uhuru Kenyatta, their holdings were previously a secret.

“Every public servant’s assets must be declared publicly so that people can question and ask — what is legitimate?” Kenyatta had told a BBC interviewer in 2018. The leaked records show he and his mother were beneficiaries of a secretive foundation in Panama, while other family members own five offshore companies with assets worth more than $38 million. Kenyatta and his family did not reply to ICIJ partner journalists’ requests for comment.

Among the other prominent global names:

Listed in Forbes magazine’s tally of global billionaires, Babis rose to power promising to crack down on corruption and tax evasion. The Pandora Papers reveal he used a string of shell companies to purchase a sprawling estate, Chateau Bigaud, in southern France and seven other nearby properties before he entered public office. He did not disclose the shell companies in the public declarations he’s required to file by law, according to Czech state records obtained by an ICIJ media partner. Within three weeks, a Czech prosecutor will decide whether to lay fraud charges against him in an unrelated case. Babis didn’t respond to the ICIJ’s requests for comment.

The Colombian-born pop music sensation is already well known for her tax troubles. Though she declared herself a resident of the Bahamas, authorities in Spain determined she was actually living in Barcelona from 2011 to 2014 but not paying taxes, and in July a Spanish magistrate cleared the way for her to go to trial on criminal charges laid in 2019. The Pandora Papers reveal that even as that investigation in Spain was underway, she was incorporating new offshore entities in the British Virgin Islands, one of which, Titania Management Inc., has never previously been publicly revealed. A copy of her Spanish ID is among the leaked files.

Jordan’s ruler, the leak reveals, secretly owns 14 luxury homes in Britain and the U.S., purchased between 2003 and 2017 through companies registered in tax havens. The total value is more than $134 million. Writing to ICIJ on the king’s behalf, attorneys denied anything improper about owning homes through offshore companies and said the king doesn’t have to pay taxes under Jordanian law. But had the purchases been public, the timing could have alienated many Jordanians. Most of the real estate deals took place since 2011, after Arab Spring protests posed the first serious threat to the Jordanian monarchy in generations. Lately, protests against the royal family have intensified amid allegations that nepotism and corruption are choking the country. Jordan is also one of the poorest countries in the region and depends on foreign aid, including $800 million from Canada in the past 10 years.

Britain’s longest-serving Labour prime minister and his wife, lawyer Cherie Blair, purchased an $11-million Victorian building in London in 2017 for her law firm. But it wasn’t an ordinary real estate transaction. Instead of buying the property, they acquired the shares of the British Virgin Islands company that owned it, from the family of Bahrain’s industry and tourism minister. By purchasing the company shares instead of the building, the Blairs benefited from a legal arrangement that saved them from having to pay more than $580,000 in property transfer taxes. Cherie Blair said in replies to questions from the U.K.’s Guardian newspaper that her husband was not involved in the transaction and that the “seller for their own purposes only wanted to sell the company” and not the property. Blair said she and her husband took immediate steps after acquiring the property to merge it back into a U.K.-based holding company, making it fully taxable in Britain.

The consequences for countries of wealth moving offshore, out of the reach of tax authorities, are particularly devastating this year, as national treasuries struggle against the whipsaw of a COVID-induced economic slowdown and sharply higher costs for health care, protective equipment and social programs.

The equivalent of at least $14.3 trillion is held offshore, according to a 2020 study by the Paris-based Organization for Economic Co-operation and Development. However, the complexity and secrecy of the offshore system make it impossible to know how much of that is tied to tax evasion and other crimes and how much has been reported to authorities.

“These are loopholes that are available to wealthy people but not available to others,” Robert Palmer, executive director of the advocacy group Tax Justice UK, told ICIJ partner the Guardian. “Politicians need to fix the tax system so that everyone pays their fair share.”