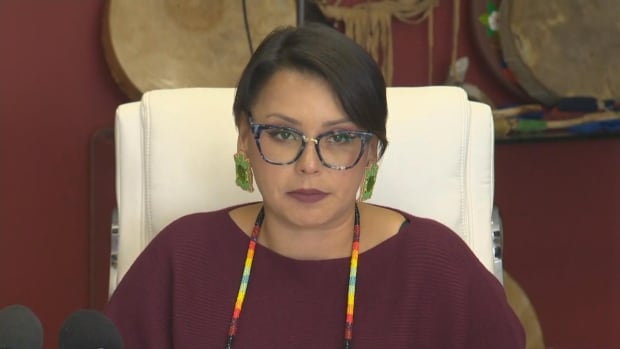 
When Amber Laplante was 14, she was apprehended by child and family services and bounced around between foster homes, group homes, hotels, a youth penitentiary and mental health facilities. Later, her two children were taken into care as well.

Laplante had minimal contact with her Child and Family Services (CFS) worker, was never encouraged to reconnect with her culture or community of Little Saskatchewan First Nation in the Interlake region of central Manitoba, about 225 km north of Winnipeg, and received no help applying for Indian status, she said.

“The Child and Family Services system failed me. When I was in care, I was exposed to violence and trauma. I was always treated as a problem and never as a person,” Laplante said at an Assembly of Manitoba Chiefs (AMC) news conference on Thursday.

“I never received the support I needed to heal.”

AMC’s First Nations family advocate filed a statement of claim with Court of King’s Bench on Thursday, seeking the damages for those affected between 1992 and the present day.

The chiefs of three First Nations — Black River First Nation, Pimicikamak Cree Nation and Misipawastik Cree Nation —who are also named as plaintiffs in the lawsuit, said Laplante’s story is one of many.

They said children who are apprehended from members of their communities face lifelong barriers reconnecting with their culture and kin.

The three nations said Indigenous children who are apprehended off-reserve face immense challenges feeling a connection with their home community, culture and language, and sometimes lack appropriate supports to receive benefits they are owed by the government that are enshrined in treaties, according to court documents.

Chief Sheldon Kent of Black River First Nation, north of Powerview-Pine Falls, about 120 km northeast of Winnipeg, said in the statement of claim that children who are apprehended and brought to urban centres “lack a sense of home or belonging.”

Not registered as status Indians

They are also sometimes deprived of existing opportunities to better connect with their culture, he said.

The Southeast Tribal Council established Southeast Collegiate in Winnipeg to provide culturally-informed high school education to First Nations youth who are in the city, however, youth in care can’t attend the school because they are required to stay within the provincial school system, the court document stated.

David Monias, chief of the Pimicikamak Cree Nation, about 530 km north of Winnipeg,  accused child welfare agencies of “often” failing to register children who are apprehended as status Indians, which has long-lasting impacts on the child and their home community.

“Every time an agency fails to register the children in their care, that First Nation also loses potential funding to support that child, including for post-secondary education and health benefits,” Monias said in the statement of claim.

“As a result, those children lose their connection with Pimicikamak Cree Nation and the First Nation loses the opportunity to develop its community.”

Neither of Laplante’s two children have Indian status, nor do they have any connection to their First Nation, the statement of claim said.

Laplante has persistently asked the child welfare agency to connect her younger daughter, who is currently in care, with groups that provide land-based teaching and culturally-appropriate supports, but the child’s social worker says she is too busy and doesn’t believe the additional supports would be helpful to her, according to court documents.

Another persistent issue, the plaintiffs said, is that children who are apprehended aren’t registered with their home First Nation.

“If a child is not registered … there is virtually nothing the First Nation can do to track down the child, and they will likely never be reconnected with their First Nation or registered as a member unless the child reaches out to the First Nation. This places an undue burden on children in CFS to reclaim their identity,” Monias said in the statement of claim.

“When our children are removed, our nation is robbed of its future leaders and advocates, and these connections may never be restored,” she said.

“We cannot rebuild our nations if our children continue to be taken.”

Families Minister Rochelle Squires said she couldn’t speak specifically about the lawsuit, but said the provincial government is working to reform a child welfare system that must be fixed.

The number of children in CFS care has dropped by about 700 from 2021, when there were 9,850 children and youth in care.

Squires said that is an improvement but remains too high.