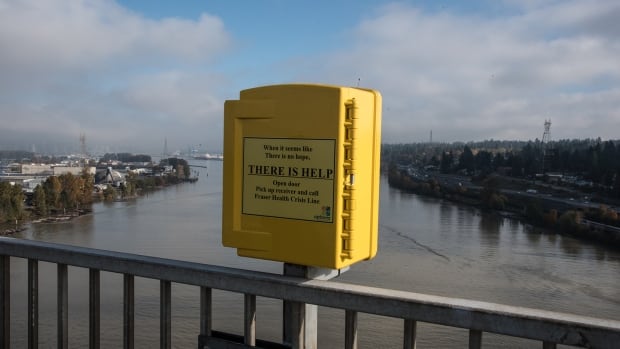 Advocates for reducing suicide deaths in B.C.’s Lower Mainland say crisis phones on four bridges in the region have helped provide critical support for people in their worst moments of anguish.

“Connection is kind of the key thing. A phone call, a conversation with someone. Some way to have the person feel less alone and be heard,” said Liz Robbins with the Crisis Centre of B.C., which is based in Vancouver.

“The phones on the bridges give people an option to do that connecting, to realize that before they act they can talk to us. And, obviously, we know people do that and we have gotten people help.”

There are more than a dozen significant bridges spanning the Fraser River, False Creek and Burrard Inlet from Vancouver to Mission. But only a few feature crisis phones or suicide prevention barriers.

In 2009, six distinctive yellow crisis hotline phones were installed and activated on the Lions Gate Bridge, the first in the province, which callers can use to reach out for emotional support or report accidents or other problems on the bridge.

In 2017 a renewal of the Burrard Bridge included installing the phones and suicide prevention barriers. Crisis phones were installed on the Alex Fraser Bridge in 2017, and the Port Mann Bridge also has them, while barriers were added to the Ironworkers Memorial Bridge in 2015.

The Crisis Centre of B.C. hopes that phones and barriers will be installed on more bridges in the region.

“Those bridges are definitely a source for peoples’ plans to die of suicide and I think anything we can do to create both barriers and opportunities for connection are really important,” said Robbins.

In the past five years, the centre’s call takers have spoken with 90 people to help them at a terrible time in their lives.

“I think the value of those phones on the bridges is that suicide can happen because there is that peak of pain … that phone is the opportunity to make a change,” said Jessica Wolf Ortiz, the centre’s bereavement co-ordinator.

The number of calls answered is actually higher because Fraser Health also take calls from the bridges.

The health authority said the Fraser Health Crisis Line received eight calls from emergency phones on the Alex Fraser Bridge and six from the Port Mann Bridge between January 2019 and mid-December 2022.

There are also a significant number of what the crisis centre describes as “silent calls” made from the bridge phones, where people connect with a call taker but do not say anything. There were more than 100 such calls between 2018 and 2022 from the Burrard Bridge alone.

In those situations, call takers have emergency responders go to the location.

The crisis centre also receives calls from people in crisis near or on the bridges from their own phones.

B.C.’s Ministry of Transportation, which is responsible for several of the region’s bridges, says it works with crisis centres and law enforcement agencies, among others, “to ensure everything possible is done to prevent suicide attempts on our structures and keep people safe.”

Statistics from the B.C. Coroners Service show that on average over the past 10 years nearly 600 people take their own lives in the province each year.

Despite the mental health challenges of the pandemic, suicide deaths have dropped over the past three years, from 634 in 2019 to 582 last year.

In September, the Crisis Centre of B.C.’s Wolf Ortiz hosted an online workshop for World Suicide Prevention Day where the goal was to have people who had attempted suicide and the families of victims talk openly about their experiences.

“And be non-judgmental and try to understand a little bit more what the suicide attempt meant because behaviour is communication, so it’s saying something about where that person is at,” she said.

“We don’t need to normalize suicide, but we need to humanize suicide.”

Both Wolf Ortiz and Robbins have worked for around 25 years as advocates for understanding and supporting people who may be considering suicide. In that time they have seen more willingness to recognize and talk about it among families, friends and organizations.

Still, Wolf Ortiz says certain times of year, such as the Christmas holidays, present challenges for people who struggle with emotional pain and don’t know where to turn.

If you or someone you know is in crisis, please contact:

12 friends dreamed of owning a bar. So they bought one, in the middle of nowhere, on Vancouver Island

‘It’s quite remarkable’: Halifax is about to set a record for lack of snow