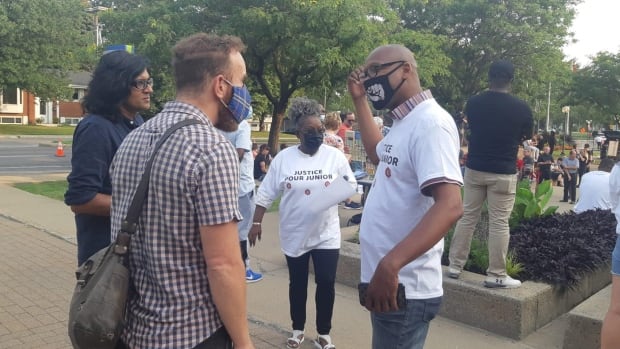 
Pierre Richard Thomas has lived in Repentigny, Que., for six years, and throughout that time, he has dreaded the day when a local police intervention would end with a Black man dying.

The Black man fatally shot by police was Jean René Junior Olivier, whose mother had called 911 to bring him to hospital because, she says, he was in psychological distress.

Thomas co-organized a two-hour sit-in on Wednesday at Repentigny’s city hall to commemorate Olivier. And like many in the crowd that evening — including Olivier’s family — he blamed racism in the Repentigny police force for the 37-year-old’s death.

“We’ve been asking for an investigation,” Thomas said. “It isn’t by chance that the police behave like that. We think we’ll find elements.”

Quebec’s police watchdog, Bureau des enquêtes indépendantes (BEI), is investigating the shooting. The Repentigny police say this is the first police-involved shooting in the force’s history.

But for many in Quebec’s Black communities, Olivier’s death is the latest example of what they say is systemic discrimination by police forces across the province. And they fear that despite repeated rulings by human rights bodies, no change seems imminent.

At a news conference the day after Olivier’s death, Repentigny police acknowledged that racial discrimination is pervasive in Quebec police forces and that there is a need to “rebuild bridges with the Black community.”

In what many in the community saw as an understatement, police Chief Helen Dion said: “The sensitivity is perhaps not as present as we’d like it to be.”

For Thomas, the words are meaningless without measurable actions to accompany them.

Repentigny: A history of discrimination

In July, the commission found that Repentigny police had racially profiled Leslie Blot when officers handcuffed and ticketed him in 2017. Blot had been parked in his car blowing up balloons for his children.

His case is the fourth time the commission has ruled against the city. Repentigny has yet to compensate Blot, despite the findings.

“It shows that they’re not acting in good faith,” Thomas said. “With that kind of reaction, how do you expect people to trust you?”

Still, he said, it’s not too late for Repentigny police to rebuild trust with diverse communities — but it will take concrete change to mend the relationship.

Ted Rutland, a social geographer and an associate professor at Concordia University in Montreal who published a report assessing arrests made by Montreal’s anti-gun squad, said police need to improve the way they handle people in mental distress.

“If someone is having a mental health crisis, our objective should be not just to not kill them but actually to provide them the care that they need,” Rutland said.

When you combine race with mental distress and then toss in a police response that is based on bias, he said, the consequences can be deadly.

In June of this year, the province announced that the Montreal police service alone would receive $5 million over two years to seize illegal firearms.

A deadly shooting like the one killing three people in Rivière-des-Prairies this week, Rutland said, gives politicians an opportunity to focus on guns and boosting police funding.

It’s an approach that has failed in the past, he said, and “that should tell us that more policing isn’t going to help.”

When Quebec police forces are not held accountable for discrimination, it erodes marginalized groups’ trust in places such as Repentigny, said Pearl Eliadis, a human rights lawyer and adjunct professor at McGill University in Montreal.

Recommendations by the province’s human rights commission are not legally binding, and before a case is sent to the Human Rights Tribunal, people who were racially profiled can spend years in court before a judgment is rendered.

“The police and the city are very well equipped to defend themselves” against individuals who are Black, poor or from disadvantaged minorities, Eliadis said.

“Then you have the criminal law system, which the police know very well, so minorities are at a systemic disadvantage throughout the entire process.”

As it stands, Quebec is playing catch-up with North American cities that are already considering reshaping their police systems.

Cities such as Eugene, Ore., and Seattle are also exploring crisis intervention services while re-envisioning policing after a report found that nearly half of 911 calls don’t require armed responders.

Some signs of change in the province

There is some movement in Quebec.

On Montreal’s South Shore, the city of Longueuil chose Fady Dagher as its new police chief in 2017, making him the first immigrant to head a Quebec police service. From the get-go, Dagher said diversifying the force was one of his priorities.

He sent officers into mosques and homeless shelters to better understand the communities they serve.

Dagher has said about 70 per cent of 911 calls are not for criminal offences but rather “social problems: human distress, neighbourhood disputes and domestic arguments.”

In 2020, Longueuil police received $3.9 million in funding to implement projet RÉSO, a community policing model pilot project that would enable police forces to hire social workers to help deal with those in crisis.

Still, it took two high-profile Human Rights Tribunal cases in 2019 and 2020 for the city to come up with an action plan to address racial profiling — and then only because the tribunal forced it to do so.

DeBellefeuille, a businessman and Montreal city councillor candidate who spent eight years seeking justice after being racially profiled, is one of the people behind a petition to the House of Commons that calls for Canada to require law enforcement agencies to create policies to end racial discrimination in order to qualify for federal funding.

“[Law enforcement agencies] will be the master of their own destiny if they’re going to get that cheque or not,” he said.

As for Pierre Richard Thomas, he said the situation in Repentigny needs to change — and soon.

“We’ve been asking the police to change their ways for years,” he said. “People won’t call 911. They pay their taxes to receive a service, but they don’t trust the police.”

The City of Repentigny did not respond to a request for comment by publication time.