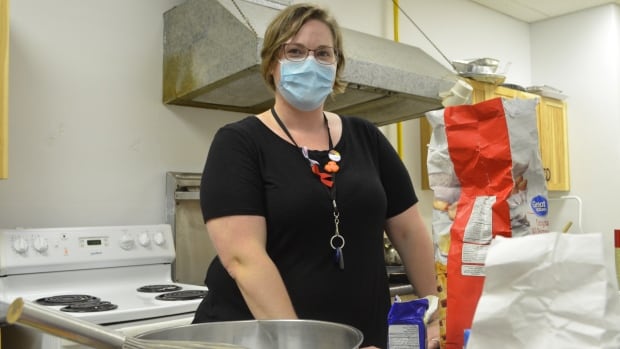 How Dryden, Ont., is supporting people living with addictions and food insecurity


As the City of Dryden continues to respond to homelessness and overdose crises across Canada, community members and agencies are coming together to offer new programs and services for the most vulnerable in the northwestern Ontario city.

Dryden is among northwestern Ontario communities that have seen a growing number of overdoses and mental health and addictions-related emergency department visits, according to data provided by the regional hospital.

Shauna Pinkerton has been living with addiction for decades, and is now on her journey of recovery.

As a community support worker, she provides harm reduction supplies and education to people still using drugs or experiencing homelessness.

“We need an emergency shelter,” said Pinkerton. “We need somewhere for people to be able to go. We have no detox. We should have those two resources already in place and be looking at the safe injection site at this point.

“I definitely see this as a turning point. If we do not get the resources in here soon, we’re going to see more and more overdoses. We’re going to see a lot more death and a lot more despair,” she said about her hometown, which has a population of about 7,400 and is 350 kilometres west of Thunder Bay.

In the past year, CBC has visited Dryden multiple times to report on how the city is dealing with issues surrounding mental health, addictions and homelessness. Here are some of the new initiatives that have started or are being considered.

Over the summer, the Northwestern Health Unit (NWHU) has been leading a feasibility study related to creating supervised consumption sites in four communities across the region, including Dryden. The NWHU services 19 small municipalities and 39 First Nations across one-fifth of Ontario’s land mass.

A supervised consumption site is a space where people are allowed to bring their own drugs to be injected, snorted, inhaled or consumed in a safe and clean environment. Trained workers are present to provide clean supplies and intervene in the case of an accidental overdose, according to the NWHU.

Other services often provided at supervised consumption sites include:

There are 39 supervised consumption sites in operation across Canada, with most in large centres like Vancouver, Edmonton, Montreal and southern Ontario cities, according to Health Canada.

Gillian Lunny, manager and chief nursing officer at the NWHU, confirmed in an email to CBC News that all feasibility study data had been collected, and a final report should be ready by the end of October.

Since June, the Dryden Regional Health Centre (DRHC) has been offering a rapid access addiction medicine (RAAM) clinic for people living with addiction and looking for support.

Often, when substance users reach out for help, there is a brief window of opportunity to get them the resources they need, said Marcel Penner, director of mental health and addictions for the DRHC. But too often, he added, that window closes as people get stuck on wait list after wait list.

“I’ve seen this story play itself out many times … and it can be very disheartening for a person,” Penner said.

At the RAAM clinic, efforts are made to book peple an appointment as quickly as possible, so their needs can be assessed and appropriate supports or referrals made, he added.

A key part of the clinic is that eligible people are offered opioid replacement therapy, where they’re prescribed suboxone, a medication that reduces the physiological craving to use drugs and treats withdrawal symptoms.

While there is some flexibility throughout the week, the clinic is currently open on Monday afternoons, Penner said. But they hope to expand their programming in the months ahead.

Once a week on Tuesday nights, the smell of food floats up the stairs and out the front door of the First United Church in Dryden. It’s part of The Community Table, a weekly initiative, started in March, for anyone wanting or needing a warm meal.

“We get a lot of different people. We figure everybody that comes here is in need of something, whether that’s a need for food, or a need for shelter or a social connection, or all of the above,” said Lindsay Burry, lead organizer of The Community Table.

Burry said the idea for The Community Table came amid the pandemic, which demonstrated the dire need to address food insecurity in the region.

It is the only place in Dryden for people to get a hot meal in the evening, Burry said.

“That’s why we went with an evening program, because it’s a gap. It’s somewhere we don’t have those services.”

Pinkerton, a community support worker, said all three of these new initiatives are important, but more is needed quickly if they want to stem rising overdoses and address homelessness.

“The first thing they say is, ‘I need a house. I need somewhere to live.’ They don’t see any hope, and so they feel like they’re just being left behind.”