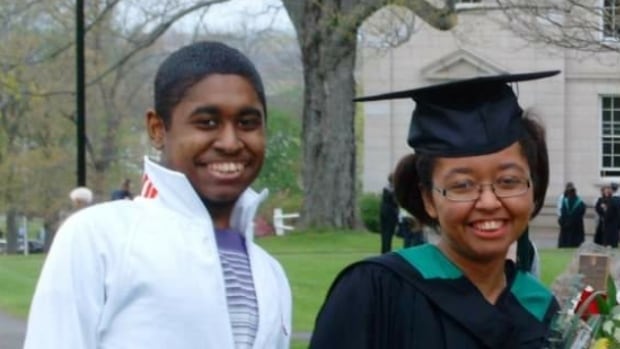 How an ultra-rare disease is bringing this N.S. family closer together


Three Nova Scotians who have the same extremely rare condition say their shared experience has brought them closer together as a family.

Brad, Bradley and Amanda Bright have Camurati-Engelmann disease, a skeletal condition that causes increased bone density, primarily in the legs, arms and skull. It can cause pain, muscle weakness and difficulty walking.

The Brights are believed to be the only people in Canada with the disease.

Patriarch Brad Bright said when he was a teenager, a teacher noticed one day at school he had a “swagger” while he was walking down a hallway.

“I never noticed it,” he said in an interview. “It was the way I always walked.”

It wasn’t until years later, when his daughter, Amanda, was diagnosed, that he found out the way he walked was because of the disease.

“When my daughter was getting ready for school, she had to do some tests, and one of her tests was for her to jump, and she couldn’t jump very well,” said Brad.

“We got it looked at and we found that … the bones were really hard.”

As it turned out, three of four members of the Weymouth, N.S., family had the rare condition.

It’s a story that Brad’s son, Bradley, told through Normal, a short film he made for CBC’s Being Black in Halifax, a compilation of four short documentaries streaming on CBC Gem.

Bradley, a 33-year-old filmmaker and animator, said that when he and his older sister were kids, they would spend a lot of time at the IWK Children’s Hospital doing tests. He said most of those tests would be done on Amanda first.

“It helped that me and my sister were close. She sort of, I guess, took the brunt of it because they would do it a lot on her,” he said.

“I really looked up to my sister for that. She sort of protected me from all that.”

But Amanda suggested it was part of her job as the big sister.

“I was always really protective of him growing up — I mean, I probably still am now, though we’re adults — but I think it has kind of brought us together,” said the 36-year-old teacher.

Although her mother, Trina, doesn’t have the condition, Amanda said she was by their side during their many hospital visits.

According to the National Organization for Rare Disorders, the prevalence of Camurati-Engelmann disease is unknown. It estimates about 300 people are affected worldwide.

Being one of the only people in Canada known to have this disease has been a challenge, said Brad.

For many conditions, there are support groups and forums, people with shared experiences. That isn’t the case for Brad.

“Ever since I’ve been sick, I haven’t yet woke up without pain,” he said. “As the years go by, it just takes everything out of you because you can’t say nothing to nobody, because nobody really understands, and you just try to cope with it yourself each day and each day gets harder.”

Tasks that people may take for granted, such as making a piece of toast for breakfast, can be difficult for Brad.

“For me to stand by the sideboard and wait for that toast, the pain that goes through you, it’s just out of this world,” he said.

Durhane Wong-Rieger, the president of the Canadian Organization for Rare Disorders, said there are many challenges that come with living with a rare disease.

She said patients may not get a timely diagnosis, and there could be some difficulties in getting access to specialists or treatment.

On top of that, there are few people in their situation.

“If you are dealing with a condition which you don’t know anyone else that necessarily has that condition, it can be an awfully scary and isolating experience,” she said.

But in a case where family members share a disease, they can find support through each other, said Wong-Rieger.

“It’s comforting to know that you’re not absolutely alone,” she said.

Wong-Rieger added that while a condition may be rare, they are often part of a family of disorders, so people can find others with similar conditions.

She noted that rare diseases affect many Canadians, though people might not recognize that.

“Even though each rare disease might only affect a few people, collectively, because there’s 6,000-7,000 rare diseases, there are close to three million people in Canada who directly have a rare disease,” said Wong-Rieger.

Bradley hopes his film will help shed light on Camurati-Engelmann disease and help him find other people who may be living with it.

“It would be neat if someone [saw] the movie, and then be like, ‘I know someone who has had stuff like that,'” he said. “That would be really interesting for me.”

“Because it’s not known in Canada much and I think by people looking at it, listening to it, knowing that … it’s here, it’s a real sickness,” he said.

Amanda said she believes it may shine a light on similar diseases.

“I know there are conditions like ours that are similar, so maybe it might bring awareness to those conditions as well,” she said.

Australian Open ‘likely’ to be postponed by ‘one or two weeks’