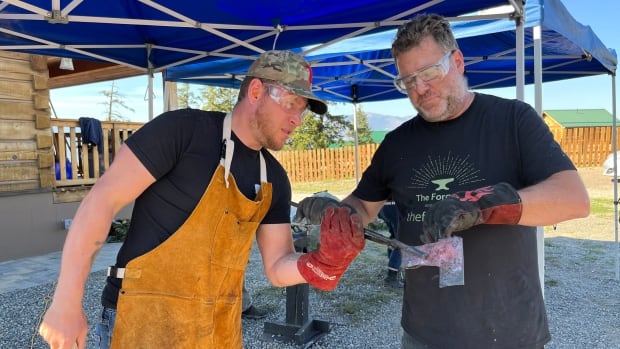 How an axe forging workshop at a B.C. Interior ranch is helping improve veterans’ mental health

Veterans Affairs Canada estimates that 10 per cent of veterans who served in combat zones or on peacekeeping missions experience PTSD, a chronic condition that can cause severe anxiety through flashbacks and nightmares related to a traumatic event.

For Jennine Gates, the act of forging an axe is a form of therapy — especially when it’s in the company of other military veterans.

“Just that sense of community that’s been building — it’s an automatic sense of comfort that you feel when you’re around people that have had experiences [like yours],” said Gates, who served as a combat soldier until 2003.

Gates was one of eight veterans attending a workshop on axe making in early October at the Honour Ranch near Ashcroft, B.C.

The southern Interior retreat, established three years ago to help Canadian Armed Forces on-duty personnel and first responders cope with PTSD and other mental health issues, sits in a secluded location on 120 acres of land and has 10 cottages that can accommodate groups or individuals.

Workshop organizer Chris Hennebury, a reservist who served 37 years as the chief warrant officer with the Royal Westminster Regiment, says he chose axe forging as a form of art therapy because the tool is a symbol of military service and duty.

Hennebury, an artist who graduated from Emily Carr University, held several oil painting workshops at Honour Ranch in June, which he says were mostly attended by women.

Several months ago, when he was contemplating what other types of workshops he could hold that would be more inclusive, he says he became aware through a social media post of Wil Steed, a blacksmith and a Canadian Royal Navy veteran, who wrote about the axe-forging workshops he had organized in Alberta.

“I reached out to him and asked him if he could be able to do a mobile workshop in Ashcroft, and he said that he actually goes to Kamloops fairly often and that he could make that work,” he said.

Steed says blacksmithing is a good way to improve mental health because it requires focus.

“You’re putting a lot of concentration and a lot of effort into it, and you tend to tune out any other distractions that are going on in your life. For me, it’s completely therapeutic — I get lost in it. I can spend six hours, look at my watch and not realize the time.”

Hennebury says making an axe involves heating a piece of steel to 1,200 C, bending and folding it while it’s still malleable, then hammering the axe head to smoothen its shape and sharpen the edge.

“You’re around a really, really hot metal,” he said. “If you’re drifting off and thinking about the dream you had the night before or something that happened to you a couple of years ago, you’re gonna burn yourself.”

He says the exercise is also an opportunity for veterans to get together and share their thoughts and experiences with each other.

“Whenever you’re dealing with veterans and serving members, it’s very unique because even though there are a few people here that know each other, the majority have never met each other before.

“It took 10 minutes for us to connect and tell stories of places we’ve been together on exercises and deployments overseas, so it was really amazing how fast and … you just have that immediate connection.”

T.M. Sandulak, a former CAF soldier who served overseas for 24 years before leaving the military in 2016, says socializing with fellow veterans helps to reduce stress — even when they’re not talking about their problems.

“Just even being around other people with shared experiences or similar experiences can be pretty powerful and pretty healing, without actually having to say a lot of words.”