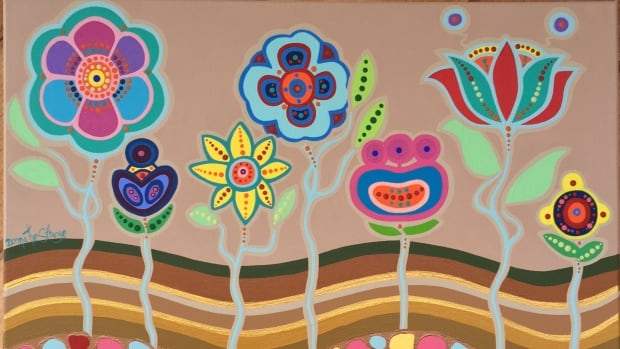 How a day for truth and reconciliation inspired these Indigenous artists


CBC Saskatchewan reached out to Indigenous artists across the province to commission original works for the National Day for Truth and Reconciliation on Thursday — asking them to create something based on whatever the day inspired in them.

The day, which is being marked as a federal statutory holiday for the first time this year, is intended to recognize the painful legacy and ongoing impacts of the residential school system, and to honour survivors and the children who died while attending the schools.

Here is what the artists created, and what the pieces mean to them in their own words.

The responses have been edited for length and clarity.

Just Stick Feathers On It by John Brady McDonald

“Being an Indigenous person, you often get invited to various committees, etc., and one of the committees was wanting to do something towards recognizing truth and reconciliation … and there was somebody at the table who had brought an idea that really had nothing to do with reconciliation, it had nothing to do with Indigenous people whatsoever.… And when I pointed that out … their response was, ‘Oh, just stick some feathers on it.’ “

“My children and my sister’s children are the first generation in four to have never known the inside of a residential school, and for me, when we’re gone, when my generation’s gone, that first-hand connection is gone. That being said, we’ve got intergenerational survivors who are dealing with the pain and trauma of what their parents and grandparents went through.”

“A lot of the reconciliation we have is akin to a kid apologizing for something: ‘OK, I’m sorry. Can I go now?’ That type of feeling. So for me to honestly reconcile … is to acknowledge truly — not just in front of the cameras, not just to appease people, not to check off a PR box — but to honestly say ‘Hey, this happened. This is what we did. This was our role in it. We perpetuated it and we continue to.’ And I think that’s the key … the powers that be continue to benefit from what happened then.”

“Somebody asked me one time, ‘How long do Canadians have to keep apologizing?’ My response was, ‘When the things they’re apologizing for stop happening.'”

Erasure is Futile by Tim Moore

Tim Moore from Swift Current, Sask., created a sculpture for the National Day for Truth and Reconciliation called Erasure is Futile, about the erasure of Métis culture and identity. 2:42

“My family has experienced this erasure that this work is about. My grandfather was essentially kidnapped, taken to residential school at about the age of seven, where he was raised. He never did see his family ever again. My family has also received scrip [documents issued to Métis people by the Canadian government redeemable for land or money, but which proved difficult for them to actually benefit from] that we had to relinquish due to, I guess, the time and the distance it would have taken for us to actually acquire these lands. So, there was a lot of disconnect on my father’s side of the family. And it’s taken a long time for us to piece together exactly what happened during that time period and in our family.”

“We were always proud people and it took a lot of time to kind of realize that there was no, so to speak, shame in being who we are. And being raised in a society where there is that kind of animosity toward you, you often will feel that societal pressure to hide your Indigenous aspect of your family.”

“The National Day for Truth and Reconciliation, I believe, is a good idea. I understand it may not be the most popular idea at the moment, but I think for me it’s a way to keep truth and reconciliation in the public consciousness going forward.”

“It seems a very broad and tall order, but I believe that until Indigenous people can really see differences in their day-to-day lives, I think we will continue to be striving for the ideals of what this truth and reconciliation is trying to establish.”

“It’s about residential schools: how they tried to wipe out our culture and our people and little did they know that they didn’t succeed and that we came out even stronger and better and united.”

“At birth, I was adopted out to a Caucasian family in La Ronge. That’s how I ended up there. I was born in Fishing Lake in Wadena [365 kilometres away] and I knew nothing about my culture or my birth family until I became an adult. And when I found my birth mother, I learnt that she was a residential school survivor in the Lebret residential school, which is known as one of the worst ones in Saskatchewan.”

“I was never taught that or told about that [residential schools]. Even my adopted parents, they didn’t really know about that either and they were studying, researching and learning about it with me and we were all just shocked that this really did happen and we really did not know anything about it. It was swept under the rug for a very long time.”

“Back in 2010 was when I first taught myself to paint, and it wasn’t until 2015 when I first discovered the Anishinaabe woodland style, and me pursuing that was definitely my way of going to my culture and learning about it.”

“[Reconciliation is] about how we treat each other as human beings and the kind of relationships and communities we need to build for the future.”