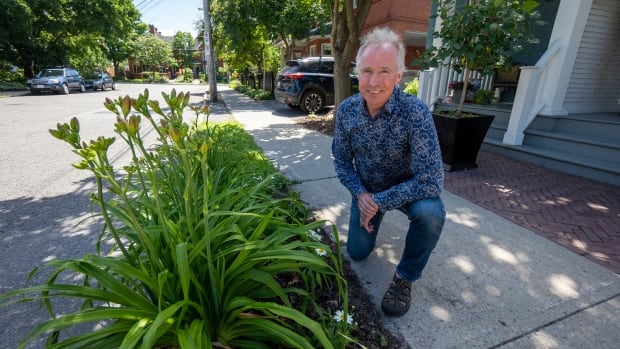 How a bylaw complaint sprouted an urban gardening rethink


Andrew Fyfe never meant to sow the seeds of a gardening revolution when he planted a few tomatoes, herbs and daisies in the narrow strip between the sidewalk and curb in front of his New Edinburgh home five years ago.

“I got tired of cutting grass, to be honest,” said Fyfe, who was also inspired by a neighbour in the central Ottawa community who’d already put the verge in front of their home to better use.

“I saw the possibilities of that and just kind of indulged a whim to do something other than having grass and weeds.”

Then, last summer, someone — Fyfe doesn’t know who — snitched to the city, and a bylaw officer paid him a visit.

It really makes no sense to be punitive with residents for simply trying to beautify their neighbourhoods. ​​​​​​– Coun. Rawlson King

Based on that single complaint, and the fact that his plants were occupying a city-owned right-of-way, Fyfe was ordered to remove his garden or have it removed for him at his expense.

Rather than comply immediately, Fyfe planted something else in his one-by-three-metre plot: a lectern with a petition quoting his alleged transgression — “failing to ensure that any tree or plant extending over a highway does not interfere with or endanger anyone using the highway” — and asking passersby whether they thought the garden was worth fighting for.

“I wanted to check to see if my neighbourhood felt the same way,” he said.

‘I was blown away’

When Fyfe checked the petition after a couple weeks, there were 180 signatures.

On a rainy September morning, Fyfe’s city councillor Rawlson King dropped by to see the garden for himself.

Neighbours soon gathered around, and before long they’d agreed on two things: Fyfe’s verge garden must be saved, and the city’s rules regarding what residents may and may not do with the right-of-way in front of their homes is woefully inadequate.

“There isn’t any clarity,” he said.

According to King, a few homeowners with verge gardens have gone through an obscure and onerous process to obtain a special permit, but most probably haven’t.

He began working with Coun. Laura Dudas to clarify the bylaw, and in early May the city’s transportation committee passed Dudas’s motion asking staff to return next year with what King calls “a straightforward approach toward naturalizing and beautifying the right-of-way.”

“If they’re not imposing on the streetscape, if they’re not affecting sightlines, it really makes no sense to be punitive with residents for simply trying to beautify their neighbourhoods,” King said.

WATCH | Andrew Fyfe pushed back against the bylaw order:

Ottawa resident Andrew Fyfe pushed back against a bylaw order to remove the garden he had planted on city-owned property in front of his house, saying the space could be used for much more than just grass and weeds.

That could include suggestions about what to plant and how high those plants can be allowed to grow. It will also clarify what’s not allowed, such as tomato cages or similar structures.

Staff have also been asked to study how other municipalities are handling the issue.

In Mississauga, for example, a similar grassroots movement blossomed into a three-year pilot project called Blooming Boulevards to create a network of pollinator-friendly gardens throughout the city and even provides residents with free seeds for flowers that attract bees and butterflies.

Guelph, Halifax and Vancouver, where verge gardens have become something of a tourist draw, have also made strides toward not only legalizing but normalizing the practice.

“It seems like slowly, municipalities are updating these antiquated bylaws because of the concerns of climate change,” observed Raewyn Khosla, a neighbour of Fyfe’s who signed his petition and has become actively involved in the movement to update Ottawa’s rules around verge gardening.

“We do acknowledge that there are safety issues and so on, but other municipalities have worked them out.”

Khosla believes the current bylaw that encourages shorn grass instead of indigenous flowering plants is rooted in colonial thinking. Environmentally, naturalized gardens are superior in just about every way, she said.

“Turf grass is a monoculture, it’s a bit of an ecological disaster.”

King agreed that the city’s apparent preoccupation with grass is “very much in the 1950s state of mind,” especially when Ottawa has declared a climate emergency.

“I think it makes more sense to have natural gardens, pollinator gardens that actually contribute to the benefit of the city’s ecology,” he said.

Fyfe’s experience has unearthed another serious shortcoming, King observed: The city’s complaints-driven bylaw enforcement system can be, and routinely is, wielded as a weapon by bickering neighbours.

“Often if neighbours are having disputes with other neighbours, they’ll pick up the phone and use bylaw services to in a sense retaliate,” King said.

“Obviously, that’s a waste of resources, especially if the gardens that are in the right-of-way are not creating a challenge.”

“What I would really love to see is Barrhaven and Orléans, the places with the boulevards that are metres wide, they could really have a fantastic garden situation going on there,” she said.

“Hopefully it will catch on.”

You can fight city hall

Khosla said the experience has also shown her that you can fight city hall, and sometimes you can even win.

“The process takes time, but it’s very positive to know that you can actually effect positive change,” she said.

For Fyfe, one of the unexpected benefits of the whole ordeal has been the new connections he’s made with neighbours.

“You’re always meeting people, and it is a reason for people to stop,” said Fyfe, who recently added garlic to his usual selection.

“You grow relationships along with growing a garden, I think that’s the thing that’s really rewarding for me,” he said as he snipped off a sprig of cilantro.

“I also really like to have my herbs available.”

Andrew Fyfe never meant to sow the seeds of a gardening revolution when he planted a few tomatoes, herbs and daisies in the narrow strip between the sidewalk and curb in front of his New Edinburgh home five years ago.