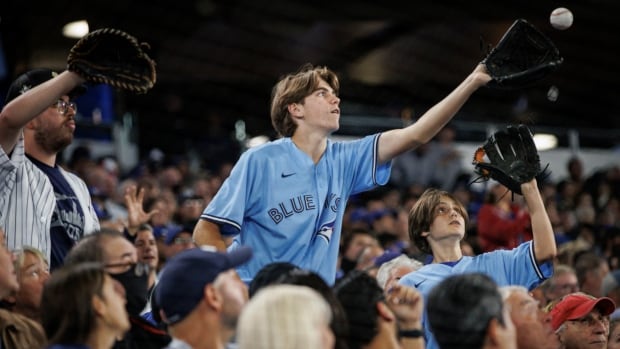 Hot dogs, nicknames and foul balls to the head: Your wild stories of Blue Jays fandom


The Blue Jays are heading back to the playoffs and that means hope among the Toronto faithful will reach a fever pitch Friday as the team hits the field at Rogers Centre.

There’s a lot riding on Game 1 of the team’s wild-card series against the Seattle Mariners — but with home field advantage, Toronto could be poised to make some noise in the postseason this year after missing by the narrowest of margins last season.

This week, CBC News asked you how you were feeling heading into the playoffs and asked for stories of your fandom and your attachment to the team.

Here’s what you told us, based on more than 100 responses so far.

The stories behind your fandom

For Curtis Tulloch and his family, the game they attended on July 19, 1994 will always be etched in their minds. His family had seats along the third base line and got there early enough to see batting practice.

His 11-year-old brother, Jonathan, was the first one to run down into the stands to find their seats. Just as he was checking his ticket, a group of players called out “heads up” to warn him about an incoming foul ball.

His brother turned — just in time for the ball to hit him in the head, knocking him out and fracturing his eye socket.

Tulloch said players sprang up and jumped over the wall to check on his brother as stadium medics came to his aid.

“While Jon was being boarded for transport to SickKids, Minnesota started their batting practice and as luck would have it, a second foul ball was sent in his direction,” Tulloch said. “This time, it hit one of the medics, fracturing his hand.”

Even with those balls flying, Tulloch and his sister stayed at the game with their dad while his brother and mother went to The Hospital for Sick Children so Jonathan could be checked out.

The Jays then invited the family back the next day for batting practice. In hindsight, Tulloch joked, that might have “been a little traumatic” for his brother.

“Jonathan got first-class treatment,” he said.

Pat Borders, a Jays catcher at the time, “came over for pictures, gave him a tour of the dugout, and signed the bat which set the whole event in motion,” Tulloch added.

“Jon ended up with some great memorabilia, including bats from Pat Borders and Paul Molitor, who were the 1992 and 1993 World Series MVPs, respectively. We stayed for the game, this time sitting safely behind home plate and the only protective screen in the stadium.”

For Krista Murray, her family’s fandom has started to span generations.

“It’s been especially meaningful to us in our house this year,” she told CBC News. Murray was only seven years old when the Jays won the 1992 World Series, and games were always on in the house, with her dad constantly wearing a Blue Jays hat.

But during the 1993 World Series, Murray was sent to bed before the end of Game 6, so she didn’t get to see Joe Carter hit the iconic home run that won the game and clinched the team’s second consecutive championship.

“It’s been a joke kind of in my family, that I had to go to bed and miss that big moment with my favourite player,” she said.

But now almost 30 years later, her own son is seven years old and has himself become obsessed with baseball.

“He is watching every game, checking the stats. He’s re-enacting the players in the back yard every night, and just following the Jays’ journey,” she said.

“It’s been really nice to have that excitement again, 30 years later.”

Most fans believe Jays will win

Call it homerism if you must, but most Jays fans who responded to our survey really love the team’s chances against the Mariners (even if Seattle did win the season series this year five games to two).

A whopping 91.1 per cent of respondents said they thought the Jays would advance to the American League Division Series.

More specifically, 52.9 per cent of people who answered thought the Jays would win the series in three games, while 38.2 per cent said Toronto would win it in two.

Only 8.8 per cent thought the team would not advance.

Are you superstitious, or just a little bit ‘stitious?’

Athletes, and by extension their fans, are notorious for being superstitious — or maybe just a little bit “‘stitious,” as Michael Scott once put it in the hit TV show The Office.

While some people who responded to our survey said they didn’t have any ritualistic element to their fandom, others definitely did.

One person wrote that their lucky charm is a ball that hit them at a game on May 22. “I got a nice bruise and a ball. I hold the ball in my hand every game!” the fan said.

Another said they like to “give an underperforming player a bad nickname and then they prove us wrong (ex. Whiff Merrifield).”

Another person said they have to stand up to watch whenever a runner is on third base, while someone else said their superstitions rest with a Buck Martinez alarm clock and a Blue Jays foam rubber hand that rests behind it on the mantel in their home.

“We don’t move them unless we have to change the battery in the clock or dust.”