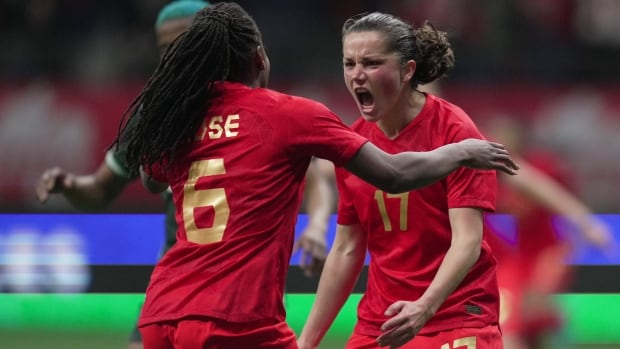 
The Canadian women’s soccer team celebrated their Olympic championship with a 2-0 victory over Nigeria in a friendly match on Friday.

Jessie Flemming opened the scoring in the 51st minute and Vanessa Gilles padded the home side’s lead with a goal in the 72nd.

Veteran Canadian goalkeeper Stephanie Labbé was perfect through the final 45 minutes of her soccer career. She was replaced just after half by Kailen Sheridan, who preserved the clean sheet.

Canada played in red jerseys with each player’s name and number emblazoned on the back in gold, a nod to the medal the team won at the Tokyo Olympics last summer.

Jessie Fleming opens up the scoring in the 51st minute as Canada goes on to defeat Nigeria 2-0 in the west coast series opener of the Women’s National Team Celebration Tour. 1:05

The Canadians are currently ranked sixth in the world and Nigeria sits at No. 39.

The two sides will meet again for the second game in the B.C. leg of the celebration tour Monday in Langford, B.C.

Canada went up 2-0 in the 72nd minute following a corner kick from Janine Beckie.

Jordyn Huitema got a head on the ball, sending it in to Gilles, who headed it in past Nigerian ‘keeper Chiamaka Nnadozie.

Sheridan made her biggest stop of the night in the 68th minute, diving to send a blast from Oyedupe Payne just wide of the post.

Deanne Rose set up the first goal of the game, sending the ball to Flemming at the top of the six-yard box in the 51st minute. Flemming took a sharp-angle shot that went high over the shoulder of goalkeeper Tochukwu Oluehi.

Oluehi was replaced in net by Nnadozie in the 70th minute after appearing to suffer an injury.

The second half started with an emotional moment as Sheridan replaced Labbé in goal.

The elder ‘keeper saluted the standing, cheering crowd — including an entire section of her friends and family — before hugging her replacement on the sideline.

Tears ran down Labbé’s face as she hugged head coach Bev Priestman, the rest of the Canadian training staff and her teammates on the sideline.

The 35-year-old native of Stony Plain, Alta., announced her retirement in January and has already played her final game for her professional team, Paris-Saint Germain.

The home side controlled the majority of the action across the first half but Labbé was pressed into action in the 28th minute.

Rasheedat Ajibade broke through the Canadian defence and sent a rocket flying from the top of the box but Labbé dove to make a fingertip save and keep the score knotted at 0-0.

Canada had a prime chance in the 19th minute when Beckie sent a cross into Sinclair in the box. The captain went for a header and sent a shot into Oluehi’s midsection from just outside the six-yard box.

Sinclair was honoured in a pre-game ceremony for breaking the international goal scoring record when she recorded her 185th back in January 2019.

The much-delayed celebration saw a video of some of Sinclair’s highlights shown on the big screen before the 38-year-old from Burnaby, B.C., and her two nieces took to the field where she received a commemorative print and a standing ovation from the hometown crowd.

Olympic gold medal goalkeeper Stephanie Labbé wraps up her professional and international career after playing on home soil for the final time. 1:58

Big cheers filled the stadium as the Canada walked out on to the field before kickoff. The players, with gold medals draped around their necks, clapped and waved for the cheering crowd before being presented with Olympic championship rings.

Friday marked the first time the Canadian and Nigerian women’s teams faced each other since April 2019 when Canada took a 2-1 decision in a friendly in Spain.

Canada was playing its first game at B.C. Place since November 2017 when the women’s squad battled the Americans to a 1-1 draw.

WATCH l A looking back at some of Christine Sinclair’s best goals:

Canadian women’s soccer team captain Christine Sinclair is honoured for the international goal-scoring record that she broke in January 2020. The 38-year-old now has 188 goals in 308 appearances with Canada. 3:06

Melissa Lucio execution: Rally held in Dallas to free her

Thieves steal $100,000 worth of sneakers in Cincinnati