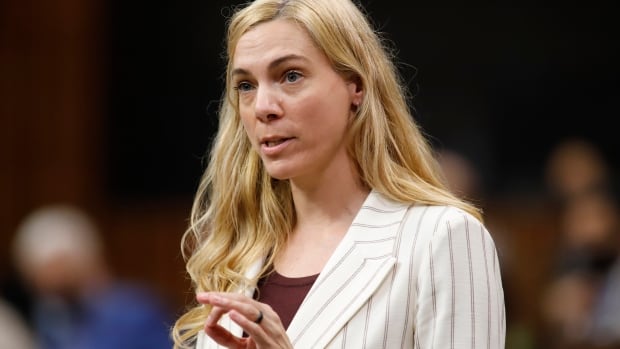 Her comment was a response to a Fifth Estate investigation that identified at least 15 group sexual assault cases involving junior hockey players investigated by police since 1989 — half of which surfaced in the past decade.

At least 50 players have been accused in the alleged crimes. Half were charged and only one was convicted after taking a plea to a lesser offence, the Fifth Estate found.

“We’re talking about a systemic issue,” St.-Onge told CBC News on Thursday. “The stories that we’re reading about are deeply disturbing and sickening, quite frankly.”

“We’ve heard these stories before. It’s not the first time we talked about the toxic culture in hockey. But nothing has been done, or not enough has been done in the past 10 years. It’s a terrible legacy we want to see change.”

St-Onge sharpened her condemnation of Hockey Canada on Thursday, arguing the organization doesn’t have the luxury of years to change its culture. She said this toxic culture in the sport has been “normalized for too long.”

“A lot of players have become men who have never taken responsibility for their actions and what happened,” she said. “But it’s also about the people in management and in leadership roles that have also failed all those years.

“So far, I don’t think what’s been done is enough, for sure.”

WATCH | ‘There needs to be change in leadership in Hockey Canada,’ says sports minister:

‘There needs to be change in leadership in Hockey Canada,’ says sports minister

Hockey Canada continues to face calls for a change to its leadership; one of those calls came from St-Onge. The hockey organization has been under intense public scrutiny since May, after a woman filed a $3.5-million lawsuit alleging eight hockey players — some of them members of the 2018 World Junior hockey team — sexually assaulted her.

Hockey parents were outraged to learn that Hockey Canada used a fund made up in part of their registration fees to pay for a settlement in that case and others.

St-Onge suspended Hockey Canada’s funding in June — the strongest sanction at her disposal, she said. A series of major sponsors followed suit and pulled their financial support for the hockey organization.

There are a number of conditions Hockey Canada must meet before federal funding can resume. But St-Onge didn’t close the door on further conditions after the completion of a financial audit and a series of ongoing investigations.

“I’m giving myself all the flexibility to decide when the federal funding will be reintroduced,” she said.

Hockey Canada is facing a “real sustainability problem,” said St-Onge, as parents wonder if they should sign up their children for hockey and provincial federations threaten to withhold their dues.

“It can’t take two, three, four, five years to change the culture,” she said. “There needs to be a 180-degree shift in hockey culture and it needs to happen now.”

In a statement, Hockey Canada said that “while culture change cannot happen overnight,” it is “taking immediate action to eliminate inappropriate action in and around our game.”

The hockey organization said it has made progress on its plan to address “toxic” culture by launching a third-party complaint mechanism, rolling out mandatory training for national teams and working on updating its policies.

“We are committed to making the changes necessary to improve the culture of Canada’s game, including by taking a leadership role in prioritizing safe sport in Canada,” said Hockey Canada in a statement to CBC News on Thursday.

The hockey organization is encouraging anyone who feels they were a victim of maltreatment, sexual violence or any other kind of abuse to come forward and report it.

The only member of Hockey Canada’s leadership who publicly resigned during the controversy, Michael Brind’Armour, is scheduled to testify at a House of Commons committee on Oct. 4.

Brind’Amour is the former chair of Hockey Canada’s board of directors. He stepped down in early August, saying “there is no need to wait for a new era.”

The Commons committee has expanded its review into how Hockey Canada handles cases of sexual assault allegations to include other sports.

Andrea Skinner, the Hockey Canada board’s new interim chair, is also being called to testify next month. She was first elected to the board in November 2020, used to serve as a member of the risk management committee and was chair of the human resources committee.

The committee has asked Hockey Canada’s board of directors to submit any notes it took during in-camera sessions when it discussed the 2018 group sexual assault case and settlement.

You can watch the Fifth Estate’s documentary Anatomy of a Scandal Thursday at 9 p.m. (9:30 p.m. in Newfoundland) on CBC-TV or stream it on CBC Gem.

This new underwater camera is powered by sound