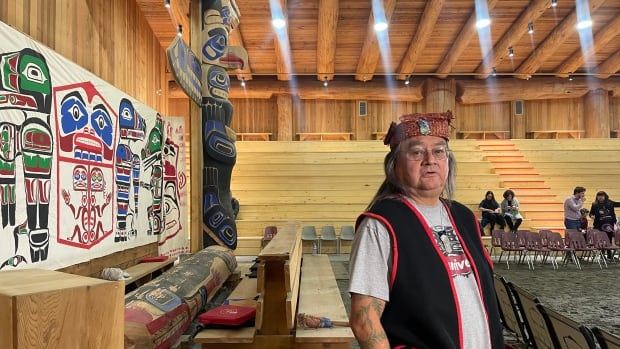 
Nearly 20 high-ranking Vancouver police officers and police board members, including Chief Adam Palmer, came bearing a gift to host what was set to be an apology feast in the Heiltsuk Nation community of Bella Bella.

But the gift and the apology were rejected.

Nation leaders expected the two Vancouver Police Department (VPD) constables who arrested Heiltsuk man Maxwell Johnson and his granddaughter in 2019 to attend the ceremony in order to apologize face to face.

“We are deeply saddened and hurt by this decision by those two men because it’s their decision and nobody else’s,” said Heiltsuk leader Kelly Brown.

Palmer told CBC News that the officers could not attend for personal reasons.

Johnson, who was handcuffed outside a downtown Vancouver branch of the Bank of Montreal in December 2019 alongside his then 12-year-old granddaughter after staff called police while he was trying to set up a bank account for her, also expressed disappointment and anger at the absence of the officers.

He said he won’t be able to heal until he gets an apology directly from the officers.

“It’s been very traumatizing for the last three years,” he said.

‘I can’t accept this gift’

While the apology feast did not go forward, Heiltsuk leaders had an uplifting ceremony for Johnson’s family to help them heal from the incident.

The police board members and officers witnessed the event, alongside about 150 guests and several reporters.

During speeches at the ceremony, Heiltsuk leaders condemned Palmer for previously denying that the officers who arrested Johnson and his granddaughter were racist.

“I heard that the Vancouver police chief said that no racism existed in that police department, but yet this [human rights] tribunal found that there was,” said hereditary chief Frank Brown.

Referring to the handcuffing of Johnson and his granddaughter, he added: “The light was shone on the ugly face of racism in Vancouver by the Vancouver city police.”

Brown then crossed the floor to where Palmer was sitting with other police officials and returned a feast bowl the VPD had given hereditary chiefs.

“With all due respect I can’t accept this gift,” Brown said to applause from the big house.

Despite the strong emotions, Palmer told reporters he thought it was a thoughtful ceremony.

“The ceremony tonight was very powerful and impactful and we want to move forward in a positive way with the Heiltsuk Nation, which is what they want to do and what we want to do,” he told reporters.

Palmer also told CBC News he would be in discussions with the Heiltsuk to consider arrangements to bring the two officers to Bella Bella to provide an in-person apology.

“That’s something we will work through with our union and with the officers and we will see if we can find a resolution on that.”

‘We have to have closure’

As part of the uplifting ceremony, Johnson, his granddaughter and his son, who witnessed the handcuffing, were brushed off with cedar boughs and told the ceremony would help to take away the pain of the event.

Johnson said he wanted to provide prints of his art work to the VPD but would wait until the two officers decide to come to the community in person.

“If any of you can tell them that I really wish they can come so we can all have closure,” he said.

“That part of our culture, we have to have closure,” he said.

“We are not done yet, we need to have that forgiveness.”