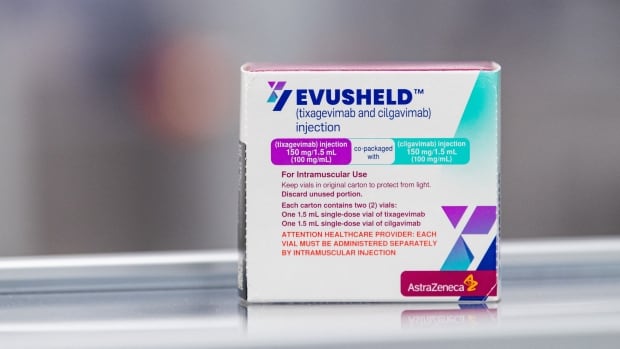 
Some people in Canada who are particularly vulnerable to illness from COVID-19 have a new injectable treatment option.

Health Canada expanded its authorization for the drug Evusheld to be used as a treatment by those age 12 and older who are immunocompromised, such as organ transplant recipients or people with certain blood cancers, and are unlikely to have enough of an immune response to COVID-19 vaccination alone, drugmaker AstraZeneca said Tuesday in a news release.

In April, the regulator approved the antibody-based therapy to prevent infection, also in vulnerable groups.

While vaccines rely on our immune system to develop targeted antibodies and infection-fighting cells, Evusheld contains two lab-made antibodies called tixagevimab and cilgavimab. These antibodies are designed to linger in the body for months to contain the virus in case of an infection.

A health-care professional administers each antibody through an injection, usually in the buttocks.

“The long-term safety is not known,” Mahyar Etminan, an associate professor of ophthalmology and medicine at the University of British Columbia with expertise in drug safety, said Wednesday.

The company’s clinical trial of the treatment showed about a five per cent benefit from the drug compared with the placebo among those at high risk, Etminan said.

The clinical trial to approve the drug was done in about 900 individuals. Health Canada previously said it’s not known if the drug can be taken in pregnancy or while breastfeeding.

As temperatures drop, some provinces like Ontario are seeing an increase in COVID-19 cases and hospitalizations, prompting concerns another wave could be on the horizon that could once again put pressure on Canada’s beleaguered health-care system.

Dr. Zain Chagla, an infectious diseases physician and associate professor at McMaster University, has investigated monoclonal antibodies and antivirals for COVID-19 and also prescribes them to patients.

Chagla said monoclonal antibodies in general are useful therapies in COVID with the benefit of being a single dose with few side-effects and no known drug interactions. But variants could make the drug less effective, said Chagla, who has done some education work for AstraZeneca.

“We’ve always had to deal, especially when Omicron came, with this evolution,” said Chagla. “The next variant may knock out a monoclonal.”

One way of reducing ‘preventable hospitalizations’

Chagla said people who are at high risk for hospitalization or even death from COVID-19 should be aware of the treatment options, including Paxlovid and remdesivir, and how to access them.

“We don’t want people admitted to the hospital who didn’t know they had COVID even though a) they were symptomatic for a while, b) didn’t get a test and c) didn’t access treatment,” Chagla said.

“All of those things are …preventable hospitalizations,” at a time when hospital staff are stretched thin across the country, he added.

A spokesperson for AstraZeneca said the cost of Evusheld treatment is up to the provinces and is currently unknown.