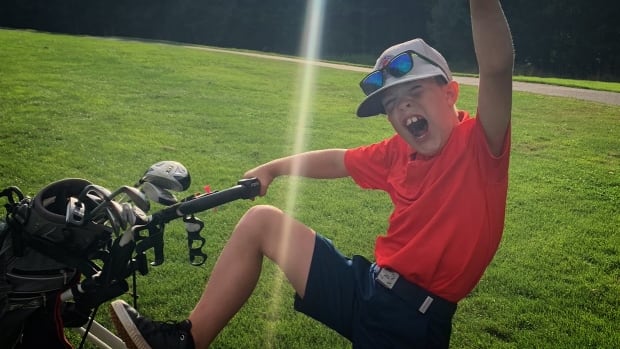 He hit a hole-in-one, but was a decade too young for the celebratory beer


Many golfers will spend their lifetime chasing that elusive hole-in-one, but Charlie Stewart did it before his tenth birthday.

That makes nine-year-old Charlie the youngest person to sink an ace at Oakfield Golf and Country Club in Oakfield, N.S., the club’s general manager says.

The wildest thing, Charlie and his grandmother say, is that the Fall River, N.S., boy predicted he’d do it on Wednesday as the pair pulled out of the driveway to go play.

Charlie Stewart is the youngest person to ever sink a hole-in-one at the Oakfield Golf and Country Club. He spoke to CBC about making the shot. 1:39

Despite his prediction, Charlie still didn’t quite believe it after he used a six-iron to send his ball flying across the 130 yards of the third hole.

“I shot it and I thought it went over the green, but I looked everywhere behind the green and I didn’t see it,” he said Thursday. “So I told my Nana I was going to go and look in the hole — and there it was, right in the hole.”

That’s when the celebration started.

The canteen cart made its way over to Charlie and his grandmother Tanya Matthews started sharing the news.

While the traditional prize for a hole-in-one is a pitcher of beer, Charlie didn’t want to wait 10 years to claim it. He happily took a bottle of Gatorade and a bag of chips instead.

High fives met him at every corner of the club. Not only did he get a hole-in-one, but he golfed a score of 46 on nine holes.

“I’ve been playing this sport for well over thirty years now, and I’m still chasing my first hole-in-one,” said Eric Tobin, the golf club’s general manager. “So for somebody to do it at the age of nine is pretty amazing.”

Charlie first picked up a set of golf clubs at four at the driving range; he became a member at the golf club when he turned eight.

He comes from a golfing family: his grandmother loves to take Charlie and his two brothers out on the green — and her husband, Dean Hartman, has set a high bar with a lifetime record of three holes-in-one so far.

“I’m going to try to beat him,” Charlie said.

For now, he’ll get his lucky golf ball framed — and hope that three others join it in the future.

‘I listened to social media.’ COVID survivor says he got information about vaccine from wrong source