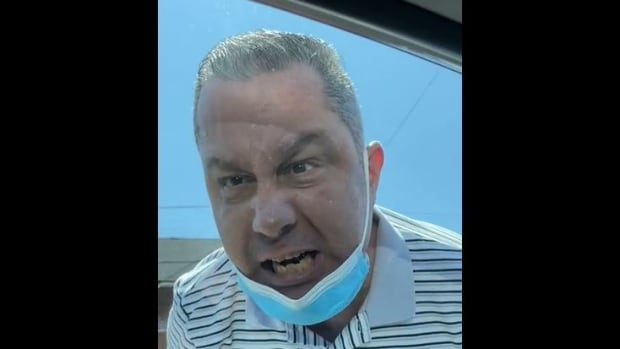 Const. Indy Bharaj told CBC Hamilton that while what took place was a “hate incident,” it wasn’t illegal.

Police issued a news release on Tuesday about the 53-second video after CBC Hamilton asked about it a day earlier.

The video, posted online Sunday, appears to have been filmed near the corner of Ottawa Street North and Main Street East.

It seems to start in the middle of a heated altercation, with a man staring into the driver-side window.

In the video, the driver appears to tell the man standing outside his car window to “get the f–k in your car right now,” to which the man accuses the driver of cutting him off.

The video shows an argument between two people that Hamilton police describes as a “hate incident.”

As the man was heading back to his own car, he could be heard calling the driver a “n—-r lover,” seemingly because the passenger in the driver’s car was a person of colour.

The driver yells back, asking the man to repeat what he said.

“What did you say about my wife?” yells the driver.

The man walks back toward the driver, appears to smack the car with his hand and ask the driver to get out of the car.

The man then walks back to his car and tells the driver to “call the cops,” to which the driver responds, “I will.”

Police to speak to man who made racist remarks

Bharaj said police didn’t receive an official report of the incident until Tuesday afternoon, when the person who shot the video came forward.

While police aren’t laying any charges, Bharaj said officers will speak to the person who made the “hate” remarks.

The video comes as Hamilton has seen a record number of hate crimes.

Lyndon George, executive director of the Hamilton Anti-Racism Resource Centre (HARRC), said in a phone interview the incident shows why there should be tougher federal legislation on racist language.

“This isn’t freedom of speech; this is hate speech,” he said.

“I understand the limitations [in the Criminal Code] … but we need to hold individuals accountable.”

HARRC noted on Twitter that the man who used the racial slur may work at Hamilton Health Sciences (HHS): “As a health-care provider that serves Hamilton’s diverse community, we are calling on HHS to take immediate action to ensure the safety of patients.”

“HHS condemns racism and intimidation in every form. We are aware of the video and are investigating accordingly,” she wrote.

Hours later, she said the employee is on leave pending the outcome of the investigation.