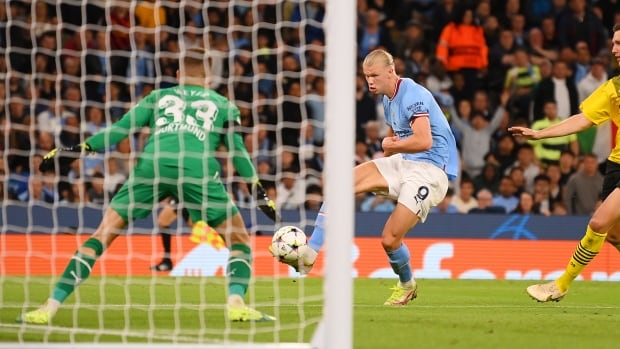 
It was the Erling Haaland show in the Champions League even on a night when Paris Saint-Germain superstars Lionel Messi, Kylian Mbappe and Neymar all scored in a comeback win.

The stage was set for Haaland to seal a 2-1 win after teammate John Stones levelled the game scoring with a stunning shot in the 80th minute.

Haaland rose to his challenge in the 84th when he met a high cross with a twisting leap and acrobatic volley to send goalward a ball that seemed to have passed him.

It was a 26th goal in just 21 Champions League games for Haaland, who has scored for City in six straight games and has a rate of better than a goal per game this season.

City’s late win restored some order on an evening when more upset results beckoned in a competition that has been more unpredictable this season.

Midway through the second half across Europe, City and Juventus were losing at home, Real Madrid was being held goalless at home and PSG was level in Israel after trailing.

Messi had tied the game for PSG before halftime at Maccabi Haifa but it took until the 69th for Mbappe to seize the lead and Neymar sealed a 3-1 victory in the 88th.

Madrid had to wait until the 80th to break through in a 2-0 win against Leipzig. Fede Valverde’s opening goal was followed by Marco Asensio’s sweeping shot in stoppage time.

Juventus, however, did not find the late goals it needed against Benfica and fell to a second straight 2-1 loss, after defeat in Paris last week.

Wasting a 4th-minute lead earned by Arkadiusz Milik, Juventus was beaten by a Joao Mario penalty for Benfica before halftime and a David Neres strike in the 55th.

Neres’ former club Shakhtar Donetsk — who the Brazilian winger left without playing a game after signing just weeks before the Russian invasion of Ukraine — continued its unbeaten run this season drawing 1-1 with Celtic which dominated much of the play.

Shakhtar might have a star playmaker in Mykhaylo Mudryk, who scored with a powerful left-footed shot for the second straight game. Shakhtar hosted the game at Legia Warsaw’s stadium in neighbouring Poland for security reasons.

Napoli was awarded three spot-kicks, through the second was a re-take after an encroachment offence when Matteo Politano followed up McGregor’s first save to score from the rebound.

On his second attempt, Piotr Zielinski fired his penalty in the same place and McGregor saved again.

When Napoli got another penalty for handball 10 minutes later, Politano stepped up and scored though McGregor got a hand to the ball on its way into the net. Napoli added late goals from substitutes Giacomo Raspadori and Tanguy Ndombele.

Rangers were down to 10 men after James Sands, the United States international on loan from New York City FC, was sent off when the first penalty was awarded.

Chelsea manager Graham Potter’s first game in charge of the 2021 European champion was a 1-1 draw at home to a Salzburg team that is exceeding expectations.

Chelsea led on Raheem Sterling’s curling shot in the 48th and was pegged back by Noah Okafor’s goal in the 75th. Swiss international Okafor also scored in a draw last week with AC Milan, which leads Group E.

Milan eased to a 3-1 win over Dinamo Zagreb as Rafael Leao starred and French veteran Olivier Giroud opened the scoring with a penalty in the 45th.

Copenhagen and Sevilla drew 0-0 in Denmark and are both still without a goal in Group G led by Man City.

Six days after the death of Queen Elizabeth II in Scotland, Rangers fans displayed a giant mosaic across one entire end of the stadium of a Union Jack flag imposed with a silhouette of the queen’s head when the teams came on the field. A minute’s silence was followed by singing the British national anthem.

Celtic’s players wore black armbands though fans in Warsaw displayed a banner with an expletive in their end of the stadium in Warsaw. It reflected the club’s historic links to Ireland and some fans’ opposition to the British monarchy.

The Champions League now pauses for three weeks during the international break for national teams.