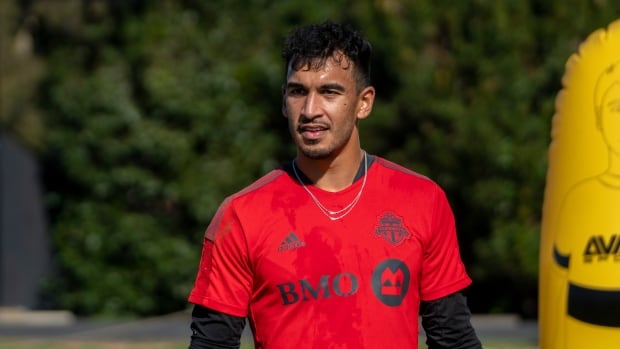 
Greg Ranjitsingh has been a nomadic goalkeeper, with stops in Orlando City, Minnesota United and Philadelphia Union as well as time as an MLS pool ‘keeper.

That journey has taken him full circle as he tries to win a job with Toronto FC.

“It’s been a long road but I’m finally happy to land at home,” said the 28-year-old from Pickering, Ont.

Ranjitsingh spent a week at the TFC training camp last year before joining Philadelphia. In July, he changed his contract to serve as the league’s emergency goalkeeper in July 2021. That led to some time with Los Angeles FC where he came under the eye of Bob Bradley, now Toronto’s head coach and sporting director.

“That week was pretty important to me to show well and meet Bob and the rest of the staff. I think that kind of led to me coming back home since he knew me,” said Ranjitsingh.

In signing Ranjitsingh through 2023 with an option for 2024, Bradley said his “experience and mentality make him an excellent addition to our goalkeeper corps this season.”

The six-foot-two, 194-pound Ranjitsingh is one of five ‘keepers in camp in Irvine, Calif.

“So far the group has been great,” Ranjitsingh said of the goalkeepers in camp. “I think we’re pushing each other. We’re all hungry to play. So far it’s been a healthy competition.”

Ranjitsingh put soccer on hold Friday, flying back to Toronto where wife, Cassandra, is due to give birth to a baby boy Sunday.

The couple have been together since meeting at Notre Dame Catholic Secondary School in Ajax, Ont.

“She’s been a big reason for my success. Every team that’ve I been at she’s been there every step of the way,” Ranjitsingh said.

Ready to battle for No. 1 ‘keeper role

Past TFC coaches have said diplomatically that they have had two No. 1 ‘keepers with Bono, drafted sixth overall by TFC in 2015, and Westberg, who joined the team in February 2019. The two have traded the starting job since Westberg came on board.

Westberg played in 58 regular-season games over the last three years compared to Bono’s 34. But Bono had the edge last season, starting 24 of TFC’s 34 league matches.

Toronto conceded a franchise-worst 66 goals in 2021, a failure that should be shared among the whole team. But neither incumbent ‘keeper seemed particularly at ease.

Ranjitsingh says his many moves have made him a better ‘keeper.

“I’ve been thrown into many different situations, many different teams,” he said. “So I’ve been able to build up some mental toughness, a tolerance and confidence in myself.”

As a pool ‘keeper, Ranjitsingh was on call, sometimes flying across the country to spend a week with a team battling injuries or COVID. Based in Philadelphia, he spent time with the Union, Orlando, LAFC and Portland last season.

He has appeared in five MLS games, two with Orlando in 2019 and three with Minnesota in 2020.

Prior to coming to MLS, Ranjitsingh made 90 appearances for Louisville City FC of the USL Championship from 2015 to 2018, helping the club to USL Cup titles in 2017 and 2018. He posted shutouts in both finals.

Ranjitsingh played collegiate soccer at Mercer University in Georgia from 2011 to 2014, earning Southern Conference’s Goalkeeper of the Year and All-Conference team honours as a senior.

Growing up, he played for Sigma FC, with former TFC fullback Richie Laryea a teammate there.

Internationally, Ranjitsingh has represented Trinidad and Tobago, where his father was born and raised, at the youth level and was on its 2019 Gold Cup team. He played against Canada in a closed-door friendly in June 2019 but has yet to win an official senior cap.