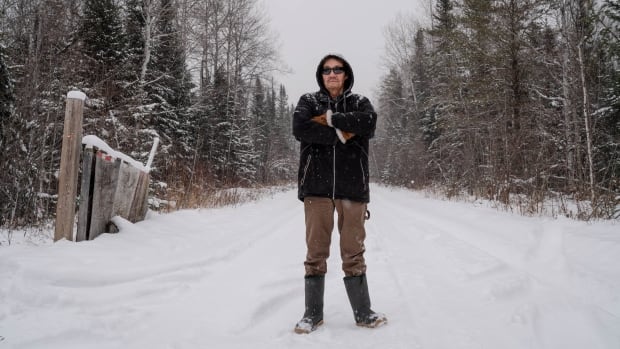 In early December 2022, community members from Grassy Narrows (also known as Asubpeeschoseewagong) braved winter temperatures to gather around a sacred fire and feast in celebration.

They were marking 20 years of that sacred fire burning — 20 years of a blockade to prevent clear-cut logging and mining from happening in their traditional territories.

It’s a blockade that’s needed as urgently now as it was in the 2000s, say community members from the Ojibway First Nation in northwestern Ontario.

Land that the First Nation considers part of its Indigenous protected area could be reopened to logging as Ontario’s Ministry of Natural Resources and Forestry (MNRF) prepares a new 10-year forest management plan in the Whiskey Jack Forest, according to a ministry spokesperson.

There are also about 3,200 mining claims in the area over which Grassy Narrows is asserting jurisdiction, the spokesperson added in a statement.

As the Treaty 3 First Nation continues to assert its sovereignty and tries to prevent resource extraction from occurring, community members shared with CBC News their memories of the early blockade days and how the significance of their work has changed.

For years, people in Grassy Narrows were concerned about the amount of logging happening in the Whiskey Jack Forest that surrounded their community.

“We had lived with the logging industry our whole lives, you know, driving behind logging trucks,” recalled Judy Da Silva, a longtime spokesperson for the First Nation.

In the late 1990s, the logging got faster and closer to the community, Da Silva said.

As forest management documents showed plans to continue cutting right around Grassy Narrows, women from the First Nation began organizing, Da Silva said. They sent letters to politicians, built relationships with like-minded activist groups across the world, and went into their classrooms to educate younger generations about their work.

“It had been a buildup of us getting educated about the logging industry, how they’re destroying our habitat, how we’re getting poisoned by them with mercury. It just went on and on,” Da Silva told CBC News in an interview from the blockade site.

The blockade itself, which continues to this day, all started one dark night in the winter of 2002, with two sisters on a drive.

“We were just having conversations about what the future is going to be like … talking about our kids, how they might miss out on being able to hunt and pick berries and have that knowledge of the land,” Isaacs said.

“As we’re talking about that, a big logging truck went by and then I remember saying we have to stop that, and she said, ‘OK, let’s do it.'”

It was a spur-of-the-moment decision; Isaacs and her sister picked up a third person with a chainsaw and they went out right then to start the blockade, cutting down trees to block the road.

Da Silva remembers the stories from that night.

“They tried to cut trees down to block the road, and they said the first one went backwards, so it didn’t go on the road. The second one went halfway on the road, but then their car broke down,” she said.

Their dad, Robert Williamson, drove out to help his daughters, Da Silva said.

“When everybody went home,” Williamson was there “all alone and he stopped one of the first logging trucks by himself,” she added.

The next day, Dec. 2, students from the local school and other community members heard about the blockade and came down to block the roads, and prevent logging trucks from going into their territory.

There are video recordings of those early days, in a documentary called As Long as the Rivers Flow, by David Clement and Thunder Bay Indymedia, that shows interactions between loggers, police officers and blockaders.

Photos and video show children lying on the roads, standing in front of trucks, holding up signs to turn away the loggers.

Archival video shows an encounter during the early days of the blockade in December 2002 between young activists from Grassy Narrows First Nation, a forestry contractor, and an officer with the Ontario Provincial Police. The video was shot by David Clement and Thunder Bay Indymedia as part of their documentary As Long as the Rivers Flow.

At first, the blockade site was just the sacred fire, chairs and a tarp to block the wind, Da Silva said, with some temporary structures going up over the coming months and years. But as time went on, Da Silva said the First Nation learned logging trucks started using different roads throughout the territory.

Barbara Fobister remembers she and a few others started doing “roving blockades,” where they would patrol different forestry roads, looking for new cuts and logging camps.

On one particular snowy evening, Fobister said she, her sister and a couple others — mostly women — were going out to a new logging camp to deliver eviction notices.

“We were kind of scared, like [mostly] women going to the campsite,” she said.

They arrived and knocked on the trailer door. When it opened, Fobister said the view was a bit of a surprise.

“The loggers were all sitting there watching hockey, and they were all in their long johns,” she laughed. “It kind of eased the fear in us, like it kind of was a comical sight … we found it funny, like these loggers that we were so scared of are sitting around in their pyjamas.”

Fobister said they served the loggers with their eviction notice — “signed with an X, just like how the treaties were signed” — and they told them to vacate within 24 hours. The next day, she said they were gone.

Fobister’s daughter, Melissa Bunting, had a newborn baby at the time, and laughs at memories of her mom.

“I wasn’t out there with them, but I do remember her sometimes getting phone calls, and she’d be like, ‘oh my gosh, really? OK, OK, I’ll be there. I got to go.’ And she would just jump up and leave.”

As the blockade continued on and people from Grassy Narrows continued to apply political pressure, the First Nation gained commitments from government and pulp and paper companies.

Almost a decade later, in 2017, the MNRF formally designated a no-harvest zone that encompassed 76 per cent of the forest under the 2012-2022 provincial forest management plan. The moratorium on logging in that area was then extended until 2024, when a new plan currently under development is expected to come into effect.

More recently, in October 2022, the president of Weyerhaueser, which owns a large, regional mill in the area, sent a letter to Grassy Narrows saying they will honour the First Nation’s no-harvest zone, and “commits to working with the Grassy Narrows Land Protection team, under the guidance of Chief and Council, prior to sourcing wood from within Grassy Narrows traditional territory.”

Blockade’s given Grassy Narrows ‘a sense of identity’

Over the years, Bunting said, the actual blockade site has changed.

Gone are the temporary structures. In their place are permanent sleeping quarters, a Sun Dance ground, and a wigwam that functions as a land-based education space.

“It almost feels like a home now. When you go there … you feel comfortable. It’s a place where we all gather now for celebrations,” Bunting said.

Da Silva added the area has become “way more than just a blockade.”

“It’s a cultural revitalization … there’s these young people that never saw the action of the blockade, but they feel the history of it,” she said.

Then a new mother, Isaacs is now a grandmother to several little ones.

“When I was a child, I don’t remember really any cultural things going on, or I don’t remember being taught about who I was. But now there’s a sense of identity because of the blockade,” she said.

“That’s the whole purpose for me … to make sure there’s something here for my kids and my grandkids — a place of finding ourselves, getting connected to the land again.”

Expert reveals why you shouldn’t put Alexa in your bedroom