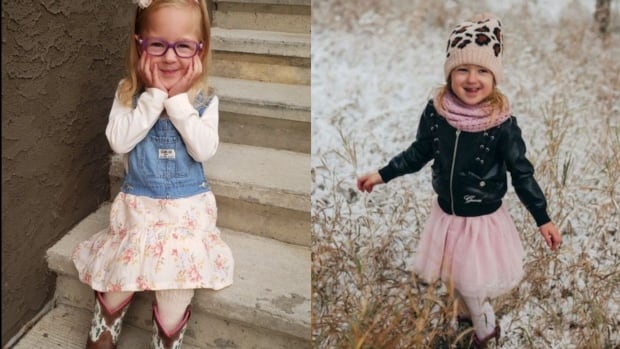 
As a busy harvest winds down at Corcelettes Estate Winery in B.C.’s Similkameen Valley, owner Charlie Baessler is amazed at this year’s crop.

“Volume is up. Quality is up. So it’s one for the books for us,” he said, cradling a bunch of grapes still growing on the vine late in the season.

But his mind is on fruit harvested two years ago on one heartbreaking day, barrelled and set to mature and only now being bottled.

The wine is called Olivia the Brave, a red Syrah, produced in memory of Baessler’s Manitoba niece, whose young life was cut short by a congenital illness.

“We’ve never made a wine like this, and no one ever will.  It’s a wine that can never be recreated,” Charlie said.

On Oct. 22, 2020, Charlie and his wife, Jesce, were supervising that year’s harvest when they got a call from Charlie’s brother, John.

“It was a horrible moment; you know my brother had a hard time explaining the situation to me on the phone, and when he got the words out, I remember falling to my knees in the vineyard.”

The Baesslers’ niece, Olivia, had died just weeks short of her fifth birthday.

The little girl was born with a congenital condition, esophageal atresia, that only affects 50 to 75 babies a year in Canada. At 15 months old, she survived a first-of-its-kind surgery in Canada to connect her esophagus and stomach using magnets.

“Olivia was full of life. She really enjoyed the short minutes that she had. She was very brave,” Charlie said.

But in the moments after the heartbreaking news, the winery planted a new seed.

That day’s Syrah grape harvest was gathered, pressed immediately, and the juice poured into one very special single barrel. Staff at Corcelettes called it “Olivia’s barrel” and let it rest in the cellars for two years to mature.

“It was a great opportunity to keep someone alive through wine,”  Charlie said.

“Wine is a living thing. Wine is always evolving.  More than just the tannins and complexity, it’s embodied with spirit and purpose, and I think that creates a whole other depth to [this] wine.”

Corcelettes has now bottled that barrel, selling a vintage called Olivia the Brave as a fundraiser for the Manitoba hospital that treated their niece through the years.

Medical staff at the Brandon Regional Health Centre are surprised and welcome the donation.

“That is absolutely fantastic, and there’s so much equipment we can buy with that sizeable contribution,” said Scott Kirk, the hospital’s director of operations.

“It’s a testament to the giving nature of Canadians.”

Earlier fundraising in Olivia’s memory has already allowed the hospital to purchase a life-saving respirator for their pediatric unit.  New funds will continue to help western Manitoba families stay closer to home.

“When you start to have some of this equipment, it makes it easier for the families … so they’re not constantly having to travel into Winnipeg to get what should be fairly basic treatment,” Kirk said.

Charlie Baessler says the Olivia the Brave vintage is already selling out fast as word of the fundraiser spreads through the communities.

“Its a beautiful thing that people just want to participate,” he said.

“Someone just came in. They bought six bottles of wine. They don’t know her. They don’t even have connections to Manitoba.  …This continued care for little Miss Olivia [shows] how powerful her spirit remains. I think that’s very touching.”

Already, Corcelettes is planning future fundraising to grow Olivia’s legacy and continue giving for the living.

“That’s how her spirit lives on. That’s the impact. Life is precious, and these little kids are even more so. Nothing’s forever. Nothing’s for granted.”