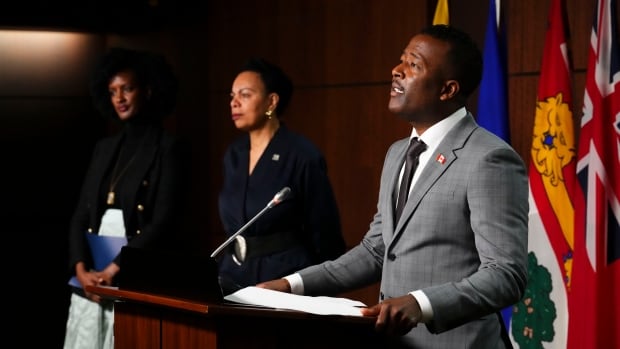 
The federal government has filed a court motion calling on a judge to dismiss a class-action lawsuit filed by Black civil service employees on jurisdictional grounds.

The proposed class action — launched in December 2020 — accuses the federal government of systemic racism, discrimination and employee exclusion. It alleges that, since the 1970s, roughly 30,000 Black civil services employees have lost out on “opportunities and benefits afforded to others based on their race.”

The statement of claim says the lawsuit is seeking damages to compensate Black federal employees for their mental and economic hardships. Plaintiffs also are asking for a plan to diversify the federal labour force and eliminate barriers that employment equity laws have been unable to remove.

But a motion filed on behalf of the federal government this week says the court doesn’t have jurisdiction over the case and the claim should instead be pursued through labour grievances.

Current and former Black civil servants have filed a suit against the federal government alleging discrimination that led to poor treatment and being overlooked for promotion.

The motion says that all related claims should fall under either the Federal Public Sector Labour Relations and Employment Board or the Canadian Human Rights Act.

A statement from the Treasury Board of Canada, which oversees the federal workforce, said the government is working to create an inclusive and diverse public service but the issues brought forth in the class action shouldn’t be addressed in court.

“There is an existing process to deal with harassment and discrimination in the public service,” the statement said, adding that the government’s position is consistent with previous government responses to class actions.

Nicholas Marcus Thompson is executive director of the Black Class Action Secretariat, the group that filed the suit. He said he is “extremely disappointed” by the government’s motion.

“[The government] has acknowledged these harms and now they’re moving to strike the entire claim, to deny workers their day in court,” Thompson told CBC.

Thompson disputed the government’s suggestion that the claims could be dealt with as labour grievances.

“They’ve been working to dismiss the harms they have caused through perpetrating anti-Black racism within the public service for decades,” he said.

“With this complaint, we are elevating Canada’s past failures and failure to act in the present to an international body,” Thompson told a press conference in Ottawa last Wednesday.

Thompson said the secretariat hopes the UN special rapporteur investigates its claims and calls on Canada to meet its international obligations to Black employees by establishing a plan to increase opportunities for Black women in the government and develop specific targets for hiring and promoting Black workers.

In response to the UN complaint, Mona Fortier, president of the Treasury Board, said that far too many Black Canadians still face discrimination and hate.

“The government is actively working to address harms and to create a diverse and inclusive public service free from harassment and discrimination. We passed legislation, created support and development programs and published disaggregated data — but know there is still more to do,” Fortier said in a media statement last week.

Over half a million dollars in fentanyl, cocaine, meth seized at Texas-Mexico border