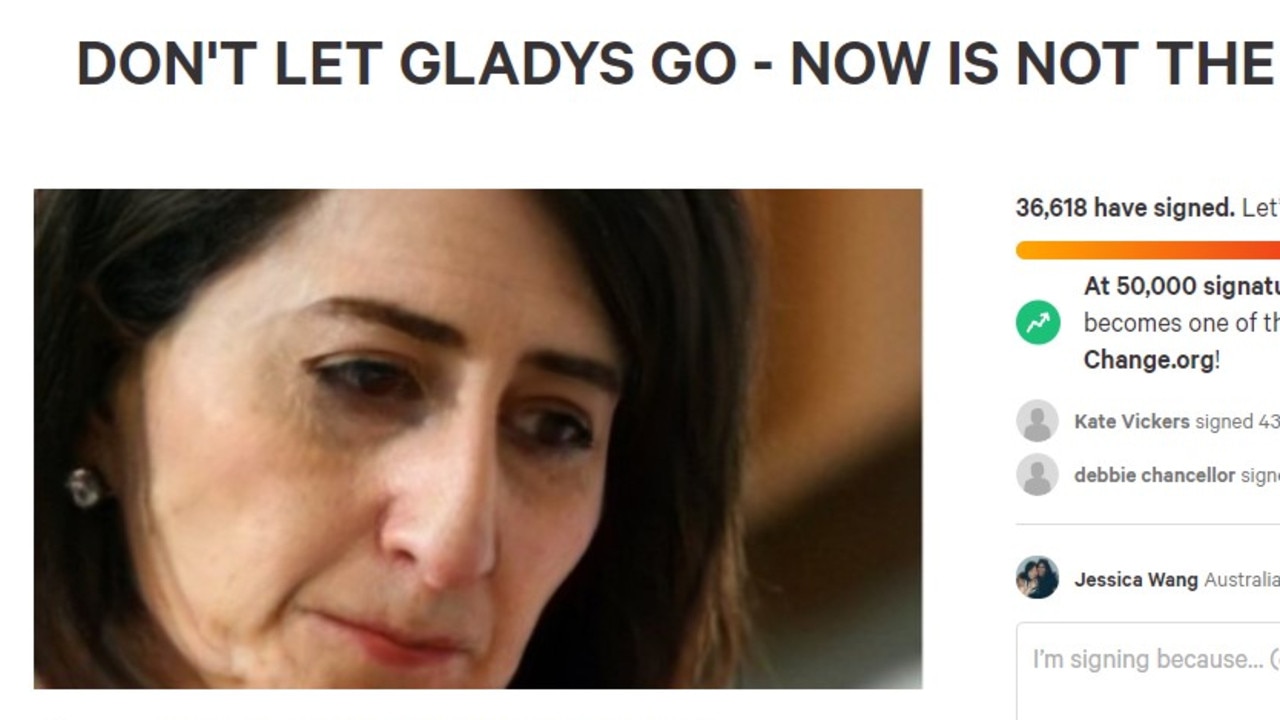 Multiple petitions calling for Gladys Berejiklian to stay as premier are gaining thousands of signatures as some very upset NSW residents share their dismay.

In the less than 48 hours since the resignation of NSW Premier Gladys Berejiklian, a change.org petition has amassed nearly 40,000 signatures with pleas to keep her in power.

Titled “Don’t let Gladys Go,” it’s one of around 30 petitions which have been started which contest Ms Berejiklian’s exit as the leader of the NSW Liberal Party.

Change.org said it was extremely unusual for an outgoing party leader to see this level of support.

“Gladys Berejiklian is an incredible leader and has made us proud to be Australian in her handling of the Covid disaster and the insanity that has dominated our world for the last approx. 20 months,” read the description of one campaign.

In the comments, signatories shared their passionate appeals for Ms Berejiklian to remain in power, denouncing the NSW Independent Commission Against Corruption (ICAC) for their investigation.

“Gladys is the best Premier! If she needs to go she should be Prime Minister!,” wrote one signatory.

“I am disgusted and shamed by the Australian politicians. Back-stabbing, unforgiving and ineffectual. Gladys is a lady of substance, strong, committed and loyal to her people, during hard times and good times. She is human, one of us not like the so-called Gods that run this country. Gladys, we are with you all the way.

“ICAC is a joke to flex its muscles during a pandemic! Gladys wasn’t going anywhere. This could have waited,” shared another.

On Saturday, pictures also appeared of her electorate office, in the north Sydney suburb of Northbrigde, and her home littered with balloons, flowers and cards left by Sydney residents “gutted” by her bombshell resignation.

Signatures in ‘far greater numbers’ than for other pollies

Others, however, have made note of the circumstances around Ms Berejiklian’s resignation from government, citing the allegations from ICAC that she’d breached the public’s trust in relation to her personal relationship with former Wagga Wagga MP Daryl Maguire.

Last year, the Liberal politician admitted in a separate ICAC probe that he had used his position to foster business deals for personal financial gain. It was also uncovered Mr Maguire ran a cash-for-visa scam for which he received cash payments that took place in his parliamentary office.

Several people commenting on social media sites said they were surprised by the calls for Ms Berejiklian to stay on as premier given she was under investigation by the corruption watchdog.

Nic Holas, campaigns director of website change.org which has hosted several of the petitions, said on Twitter that the premier had “far greater numbers” than similar petitions focused on a change in leadership or political scandal.

On Friday afternoon, ICAC announced they were investigating Ms Berejiklian over a series of grants awarded to community organisations between 2012 and 2018. Subsequent public hearings will probe whether she was “liable to allow or encourage the occurrence of corrupt conduct by Mr Maguire”.

It comes almost a year after Ms Berejiklian revealed she had a “close personal relationship” with Mr Maguire, which began in October 2015 and lasted for five years.

While the Premier has vehemently denied all accusations of misconduct and corruption, on Friday she announced she was left with “no choice” but to resign, adding that the timing was “completely outside” of her control.

“My resignation as premier could not happen at a worse time, but the timing is completely outside of my control, as the ICAC has chosen to take this action during the most challenging weeks of the most challenging times in the history of NSW,” she said on Friday, a day after she was made aware of the investigation.

“That is the ICAC’s prerogative. Resigning at this time is against every instinct in my being and something which I do not want to do. I love my job, and serving the community, but I have been given no option following the statement issued.”

Currently the names predicted to win the leadership of the NSW Liberal Party are Treasurer Dominic Perrottet and Planning Minister Rob Stokes, who as is stands is the only contender who has officially announced his intention to run. It’s been suggested Tourism Minister Stuart Ayres could also his forward for the position.

The NSW Liberal party room is slated to meet on Tuesday to choose a successor to Ms Berejiklian.