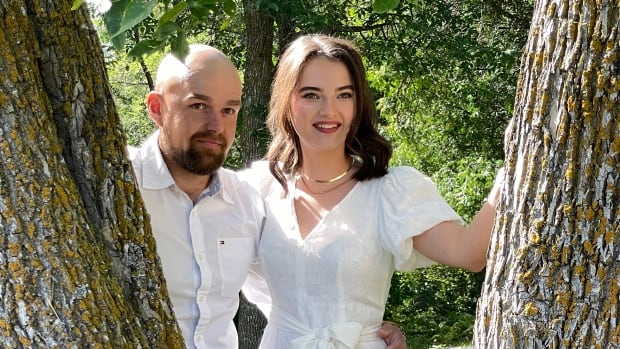 
Love is in the air in Gimli, Man.

Daria and Anton Intiuk just tied the knot on the beach and the couple is the talk of the town, about 90 km north of Winnipeg.

The newlyweds moved to Gimli in May, after fleeing their home in Kyiv earlier this year due to the war with Russia. Since then, they’ve been welcomed by the town, who banded together to help organize the wedding.

“It’s a great place for a wedding,” Daria, 22, said Saturday. “I think it’s a much beautiful place. The best that we can have.”

The Intiuks were the first of about 47 Ukrainians who chose to settle in Gimli after arriving in Winnipeg.

Daria agreed. It’s amazing “from the first day … we’re feeling like we’re in a super big family,” she said.

The couple has been together for about two years and met at their work at a TV station in Kyiv, where Anton was a producer and Daria was a TV journalist.

They got engaged in April in Paris after fleeing their home in Kyiv.

Once they moved to Gimli, the couple were hired right away at Chudds Corner, a gas station, auto dealership and powersports shop. Daria is a shift supervisor/cashier at the gas station and Anton does maintenance and repairs in the RV division of the business.

As they settled into things, they decided they wanted to get married.

Lots of local businesses and residents banded together to make Saturday a special day, said Kevin Chudd, the vice-president of Chudds Corner.

The whole wedding was planned in 10 days and everything including the flowers, wedding cake and hotel space were all donated so the couple would have a picture-perfect day.

“It makes you proud to live in Gimli, proud of the volunteerism, proud of the business community and proud of seeing people working together,” said Chudd, who took care of the wedding dinner.

Daria was near tears with joy.

“I’m trying to not cry because now I have a beautiful husband for all my life,” she said.

The couple, who are following the war closely, would like to have some of their family still in Ukraine move to Canada.

The Intiuks plan to have kids and said they’d like to start a business in Gimli one day, perhaps selling the Ukrainian food that’s been a hit with the town’s residents.

They’re both grateful for the warm welcome they’ve received.

Daria said they’re thankful to all the Canadians who have been helpful.

“It’s very important when you lose your normal life and you try to build a new life,” she said, noting the local residents have been very supportive.

About 30 people were at the wedding. Romanna Klymkiw, a volunteer in the dormitory where the couple stayed when they first arrived in Gimli, was among the guests.

“It’s our first Gimli Ukrainian wedding and I’m sure there’s going to be many more,” Klymkiw said.

How to cook mushrooms: from cremini to shitake