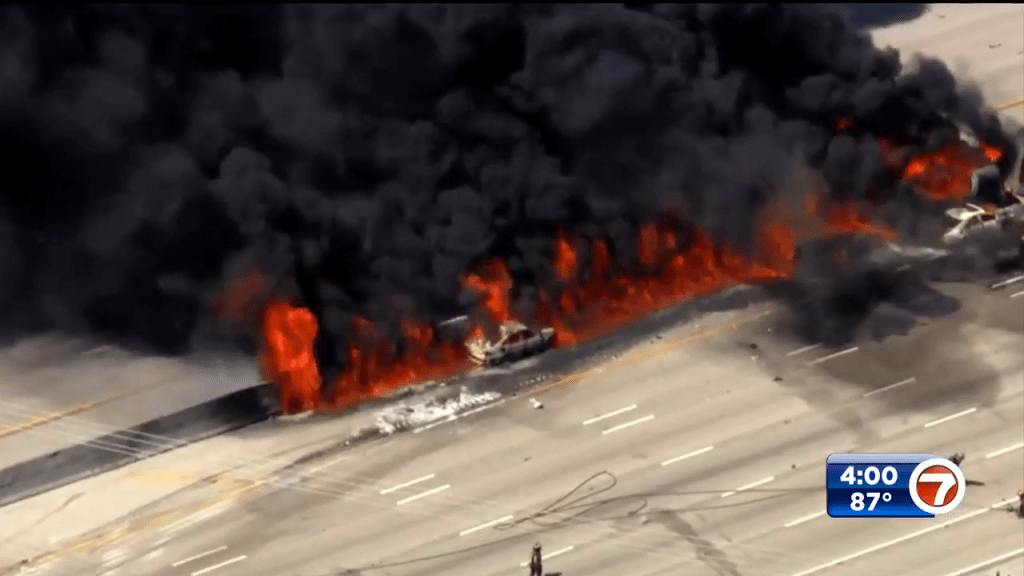 
(WSVN) – A fire caused by a fuel tanker that rolled over onto a guardrail shut down traffic in both directions on Interstate 95 for hours.

Delray Beach Fire Rescue rushed to the scene at Atlantic Avenue, Tuesday, a little after 1 p.m.

7Skyforce hovered over the scene of the fire where firefighters sprayed foam to douse the flames.

The fire was mostly extinguished after it had been burning for around 40 minutes.

Two sedans were seen scorched by the flames as well as a median where the tanker burned.

Bernstein was nearby when the tanker crashed.

According to Florida Highway Patrol, a car driving northbound switched lanes when it crashed into the tanker, causing it to overturn and burst into flames. Another car tried to avoid the collision and ended up slamming into the median, knocking over a light pole onto two cars on the southbound lanes.

“Explosions got great and more violent. It almost looked like a mushroom cloud was forming from the concurrent explosions,” he said. “There was a huge oil tanker truck that had blown up.”

Some of the fuel from the tanker made its way into a storm drain, which ignited small fires on the grass off the highway.

Several units from Broward Sheriff’s Fire Rescue arrived at the scene to assist with the fire.

“DBFR responded as did Boca Raton Fire Rescue, and Palm Beach County Fire Rescue, multiple law enforcement agencies from the area, and FHP are investigating,” said Dani Moschella, DBFR Spokesperson. “It was a three-alarm fire, which indicated that massive response to the fire. This was really huge. People can see it from miles around.”

According to DBFR, a total of five people were injured. The extent of their injuries remains unknown at this time.

A public information officer said Wednesday that out of three that were transported to Delray Medical Center, two people were taken to the burn unit at Jackson Memorial Hospital.

The driver of the oil tanker was lucky enough to escape the vehicle before exploding.

“Finally they were able to contain the fire, but it was terrible,” said Bernstein. “It was really, really nasty.”

Naomi Matatov and her family were driving by as the tanker was still up in flames. Her children, who were in the back seat, were scared.

Nearby businesses were able to see the smoke and fire from a short distance.

Drivers are advised to avoid I-95 as crews work to put out the rest of the fire.

HPD rookies pay for own guns: Houston police officers with $42,000 starting salary could spend up to $2,000 in 1st year