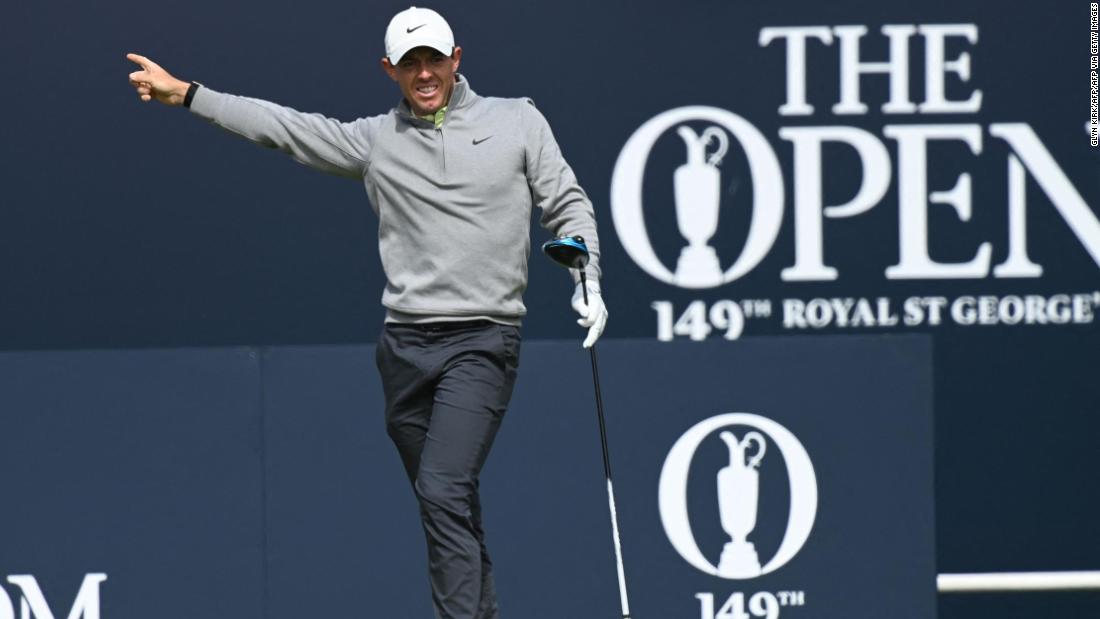 From ‘unbelievable’ to ‘just brilliant’: Rory McIlroy experiences the Open’s lows and highs

The golfer they are trying to catch a glimpse of bounds into view with typical jauntiness and the crowd erupts in delight.

Rory McIlroy may be going through a rough patch on the links course, but golf fans still absolutely adore him.

After a typically booming drive he strides off the first tee at the Open with purpose and is greeted with a cacophony of: “Come on, Rory,” in particular from younger fans.

Having burst onto the scene as a young golfer, winning four majors and capturing the hearts and minds of many golf fans — in particular, those from the UK — McIlroy is a name that is often sought on leaderboards, with many wishing him well whenever he steps onto the course.

READ: ‘Everybody loves to hate the villain,’ says Shooter McGavin 25 years on from ‘Happy Gilmore’

This year’s Open is no different — there are constant shouts of encouragement as he navigates the course at Royal St George’s.

On the opening hole, however, things don’t quite go to plan for the Northern Irishman. He has to settle for a bogey — cue loud groans from the assembled masses.

Here lies the essence of being a fan of McIlroy, who last won a major in 2014, when he was victorious at the PGA Championship and the Open.

Over 18 holes, you are likely to see some glaring errors and missed shots. But you will also see some fabulous strokes, which have you questioning why he can’t do that more consistently.

And this volatility is why as McIlory makes his way around the 18 holes, perhaps attracts such a devoted following, with crowds six or seven deep cramming round greens to cheer on the 32-year-old.

On the second hole, Mcllroy has to settle for another bogey, with one disappointed fan exclaiming: “That is unbelievable.”

However on the par four fourth hole, McIlroy like a magician conjures up a birdie to claw a shot back. “He is just brilliant,” opines another McIlory fan.

And so it goes. Brilliant shots interspersed with errant ones. Though there’s one constant; fans’ willingness to cheer McIlroy on come what may.

Two birdies in the middle of his round are met with rapturous applause. When the Northern Irishman has a key putt, it’s almost as if the fans are trying to suck the ball into the hole, while their phones are pointed in his direction to document the moment.

A late pair of bogeys halts McIlroy’s climb up the leaderboard — although a vital birdie on the 18th helps cover up some of that damage — as he finishes the second round on level par, nine shots behind the leader Collin Morikawa.

But it’s a birdie that ensures McIlroy will play on both Saturday and Sunday after making the cut, and will give thousands more fans the opportunity to see him and that familiar jaunty walk up and down the fairways.

“It’s brilliant. It feels great,” McIlroy told the media after his round. “I think everyone has missed this tournament for the last couple years.

“It’s nice to have it back. I’ve had a great support out there the last couple days, and as I said, pleased at least to get in the clubhouse and make sure I get a bit more support over the next two days, as well.”

‘Pandemic of the unvaccinated’: COVID-19 deaths up 26% over previous week in U.S.