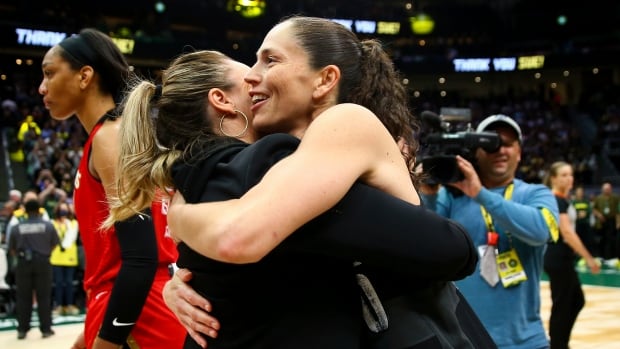 From coverage to sponsorship, 2022 was pivotal for growth of women’s sports


South Carolina coach Dawn Staley has been around women’s basketball long enough to see the growing pains of a young WNBA league gradually shifting to increased interest in the sport at all levels.

“We probably are bursting at the seams for the people that are decision-makers in our game to allow us to be just that,” said Staley, who led the Gamecocks to their second women’s hoops title this year.

Popularity across women’s sports has grown steadily over the past few years, but 2022 marked a pivotal moment as several sports saw increases in viewership and ratings, sponsorship deals and prime-time coverage.

This past WNBA regular season was the most watched since 2006. And storylines were plentiful as the league contended with the detainment of Phoenix Mercury centre and two-time Olympic gold medallist Brittney Griner and the retirement of one of the league’s most popular players in Seattle Storm point guard Sue Bird.

According to ESPN, which aired 25 regular-season games and the entire postseason, the 2022 playoffs averaged 456,000 viewers — up 22 per cent over 2021’s postseason — making it the most-viewed WNBA postseason since 2007. The WNBA draft averaged 403,000 viewers, which was the most since Diana Taurasi was the top pick in 2004.

WNBA commissioner Cathy Engelbert said her league and the women’s college game build off each other.

Engelbert said the NCAA Women’s Tournament, which had the most viewed championship game in nearly two decades, built momentum for the women’s game heading into the WNBA season. Now she wants to see how far that growth can go.

“I’m never satisfied,” Engelbert said. “My team is like, ‘Ask for more.’ When you’re in hyper growth mode that’s how you have to do it. We don’t rest. We have to take advantage of the momentum when you have it. … You have to keep pushing, too.

At the collegiate level, division I football players continue to exponentially out-earn athletes in all other sports. But name, image and likeness (NIL) deals have been a game changer for female collegiate athletes, particular in non-revenue producing sports. NIL allows women to take advantage of large social media followings and earn sponsorships with brands like Champs and Adidas.

Olivia Dunne, a gymnast at LSU, has over 8 million followers across all of her social media platforms, more than any other female collegiate athlete. Her sponsorships include deals with the clothing brand Vuori and American Eagle.

From the July 2021 inception of NIL through November, women’s sports occupied six of the top 10 highest-earning sports by NIL compensation, according to the NIL technology and marketing company Opendorse.

“The student-athletes are using social media to build their own audiences, which is driving more interest and tune in to their sports,” said Blake Lawrence, CEO at Opendorse. “The industry is feeding itself … the more marketable the women’s sports athletes, the more engaged their audience will be, the more engaged the audience will be, the more marketable the athletes become.”

Women’s soccer on the rise

Women’s soccer has also enjoyed a boost in 2022.

The sport has seen increased global revenue from sponsorships and broadcast deals, according to a survey by FIFA, the sports’ governing body. In an October report, the organization found that clubs reported year-on-year commercial revenue growth of 33 per cent — indicating growing interest from sponsors; 77 per cent of leagues had a title sponsor in 2021, up from 66 per cent the previous year.

In Canada, former national teammates Diana Matheson and Christine Sinclair announced their intentions to launch a domestic professional league beginning in 2025, with two teams already on board.

Soccer superstars Christine Sinclair and Diana Matheson announce that a professional women’s soccer league in Canada will launch in 2025. The athletes tell Adrienne Arsenault the country has the players, money and desire to make the league a success.

That structural growth was coupled with unprecedented overall interest in the game.

“The number and the types of different platforms that are highlighting women’s sports, not just women’s soccer, it’s just showing overall that there is interest,” said Kate Markgraf, the general manager of the U.S. Women’s National Team.

In the United States, the National Women’s Soccer League saw growing popularity amid the backdrop of a league-wide abuse scandal.

In August, an independent investigation commissioned by U.S. Soccer found that emotional abuse and sexual misconduct in its pro league were systemic, impacting multiple teams, coaches and players.

As the sport gains global momentum ahead of next summer’s Women’s World Cup in Australia and New Zealand, U.S., Markgraf expects this year’s trend to continue for the foreseeable future, and she wants the success and popularity of women’s soccer to impact fans personally.

“When you go to a game and you watch it, it’s like, huh, and you leave changed,” she said. “And the more frequently they happen, the longer they resonate. … That’s the goal of U.S. soccer, is to be one of the preeminent sports in our country.”

Meanwhile, a calendar scrambled by the pandemic meant that both an Olympics and world championship were contested by women’s hockey players in 2022.

The game drew a peak audience of 2.7 million people on CBC, making it the most-watched event of the Beijing Olympics.

A few short months later, Canada successfully defended its world championship title with yet another win over the U.S. in the championship game.

However, the professional divide in the sport stayed put, with the Professional Women’s Hockey Players’ Association continuing to play a series of showcases dubbed The Dream Gap Tour. Most North American Olympians are members of the PWHPA.

The Premier Hockey Federation also continued its growth, recently announcing a salary cap that would double to $1.5 million next season and poaching American star Brianna Decker from the PWHPA.