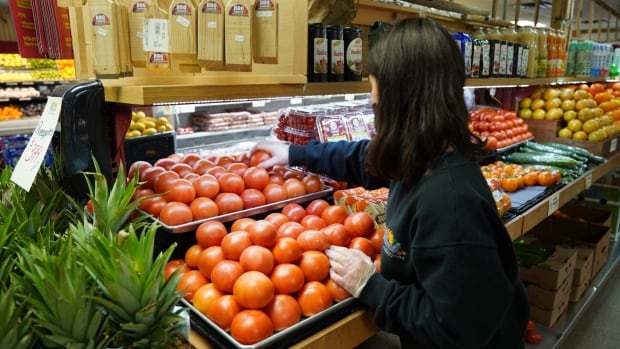 From bargain shopping to living on oatmeal and eggs, how Canadians are surviving soaring prices


This story idea came from audience members, like you, who got in touch with us. Send us your questions: ask@cbc.ca

Skyrocketing prices are forcing more Canadians to make tough decisions, leaving even middle-class families to choose between buying the food they need and paying their bills.

A recent survey from Food Banks Canada found that nearly one in five Canadians reported going hungry over the last two years.

With the war in Ukraine contributing to the largest cost-of-living crisis of the 21st century, according to a United Nations report released this week, even families in wealthier countries are feeling the squeeze.

“The war in Ukraine has trapped the people of the world between a rock and a hard place,” a briefing from the United Nations Global Crisis Response Group states.

“The rock is the severe price shocks in food, energy and fertilizer markets due to the war…. The hard place is the extremely fragile context in which this crisis arrived; a world facing the cascading crises of the COVID-19 pandemic and climate change.”

The current situation is making it tough for people like Dave Arsenault of Moncton, N.B.

He said that before the COVID-19 pandemic, which was declared in early 2020, he would have described his family of four as middle class. Now, he said, they live paycheque to paycheque.

“It feels depressing,” Arsenault said. “It’s frustrating because it’s through no fault of your own that your entire lifestyle changes.”

Feeding his family, which includes 11-year-old twins, is tough even with a double income, said Arsenault, who works at a newspaper printing press and is the president of his union local.

Both he and his wife, an office administrator, have unionized jobs with standardized yearly raises, but he said it’s still not enough to keep up with rising costs.

“It’s a definite struggle,” he said.

Arsenault said the family used to be able to afford to stock up on extras when grocery shopping, but now they can only afford necessities — despite hunting for bargains.

“We’re barely just scraping by on getting enough for what we actually need,” he said. “We’ve cut out a lot of meat…. Instead of buying steaks, you buy pork chops.”

Arsenault said while he noticed a jump in prices early in the pandemic, it’s gotten a lot worse in the last six months.

Surviving on oatmeal, eggs and tuna

Johnnie Barlow, a resident of rural Prince Edward Island, knows that reality all too well.

“In the last few months with the price of everything going up, there’s nothing left. By the first week of the month, I’m out of money,” he said.

Barlow currently relies on income assistance because he has a brain tumour that affects his thinking, making it difficult to work.

Since the financial support he receives isn’t enough to cover rising costs, he said he’s had to start restricting his diet.

“I’m trying to stay healthy as cheaply as I can,” he said.

He’s also had to cut back on the nutritional supplements he used to buy, to help treat symptoms caused by the tumour.

Barlow, who lives 20 minutes from Charlottetown, said he’s hoping to soon return to his job selling home heating and cooling systems. But to do that, he needs to pay for repairs on his car, the only mode of transportation available where he lives.

“You have to spend money to make money,” he said.

Christine Taylor, who lives in southern Ontario, said she’s finding it hard to pay all of her family’s bills, and she worries about those less fortunate.

“This direction is not economically sustainable. It will break people — not only financially, but emotionally and mentally,” she said.

Taylor, who has a job in the fuel and energy industry, said she and her husband, who works in home and mobile electronics, bring in a combined annual income of about $85,000. Yet it’s not enough to keep up with all of the expenses that come with owning a home and raising two teens.

“We just get by,” she said. “And costs keep rising and our wages stay the same.”

Taylor said they’ve postponed paying some bills in order to cover the cost of vehicle repairs.

She’s also started hunting for bargains at the grocery store and planning more meals that will make leftovers.

Extra expenses — like an annual family trip to Thunder Bay, in northwestern Ontario, or horseback riding lessons — are some of the cuts they’ve had to make.

WATCH | Food banks in Canada brace for summer of hunger as prices rise:

Food banks across the country are bracing for a summer of hunger as rising inflation pushes more Canadians to rely on charitable services.

“As a family within the middle class, we are feeling [the] struggle and cannot afford to do simple things on the side,” she said.

Taylor said while they’re tightening their belts, she worries about those on a fixed income who have no extras to cut.

“My heart breaks for them,” she said.

Monkeypox can ‘masquerade’ as other conditions, with wide range of symptom severity