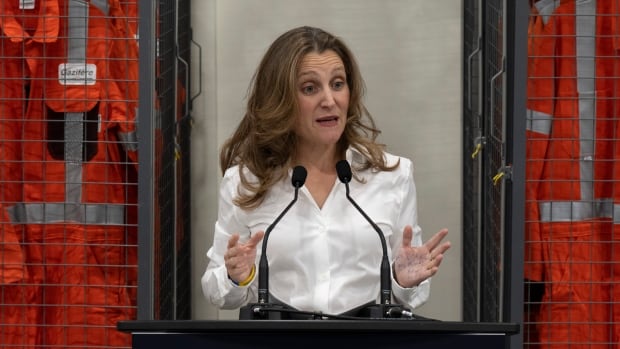 
After the Canadian deputy prime minister’s declaration in Washington, D.C., last week that the “end of history” has itself now officially come to an end, Chrystia Freeland is bringing her message home to Canadians.

But as Freeland announced that we must abandon the optimism that post-communist countries would gradually turn into healthy democracies and good global citizens, some critics were warning that she was helping to widen a new great divide in trade and politics that may not be as favourable to Canada as the original Cold War.

In a speech to the Brookings Institution on Oct. 11 that is still making waves around the world, called variously — though not by her — a “manifesto” or the “Freeland Doctrine,” the deputy PM and finance minister laid out groundwork for a new global trade regime.

Using Russia’s Feb. 24 invasion of Ukraine as a jumping-off point, Freeland’s proposition — titled How Democracies Can Shape a Changed Global Economy (well worth a listen on the Brookings website) — insists that we should stop supporting autocracies such as Russia and China and focus on trade and investment in the countries of our democratic allies.

Parts of the idea — including the “friend-shoring” proposed by U.S. Treasury Secretary Janet Yellen as a solution to supply chain problems — are not entirely new. But in an impassioned and rational presentation to a collection of global policy wonks, Freeland sketched a blueprint for how Canada and its allies must respond to the world’s latest crop of autocrats.

This week, Freeland is following up her Washington talk with speeches across Canada, the first on Monday in Gatineau, Que., expanding on how her global plan will affect Canadian workers and livelihoods as inflation lingers and the world appears to be heading into recession.

While many trade experts have warned in the past that pulling away from Western dependence on Chinese manufacturing and Russian energy will create economic pain, Freeland said it is also a rare chance for a departure from the status quo.

While she warns of a recession ahead, Finance Minister Chrystia Freeland says the federal government has the right tools in place to get through this period successfully.

“This change represents an economic opportunity for Canada,” she told employees at a Quebec plant making green hydrogen from electricity. “An opportunity which only occurs once per generation.”

She warned that brewing inflation means the federal government cannot bail out everyone the way it did during the COVID-19 economic collapse. But by investing in Canada and promoting investment by our democratic trade partners, governments can help restart the West’s technology and industrial engines, she said.

As if a demonstration of Freeland’s new push, on the same day she spoke, federal and provincial governments announced a new investment in research and development in Ottawa’s Silicon Valley North with Nokia — a company from Finland that is a democracy and prospective NATO member on the frontier with Vladimir Putin’s autocratic Russia. Canada used to have similar deals with China’s Huawei.

“We can ensure that our economy prospers for generations to come,” Freeland said in what could have been a hustings speech. “This is the future we can create for ourselves and our children.”

Political grandstanding aside, the three pillars of Freeland’s manifesto — trading with our friends, being inclusive of like-minded governments and breaking with the autocrats — really does represent a new paradigm after decades of globalization.

After the end of the Cold War, American scholar Francis Fukuyama — apparently “Frank” to Freeland, who rang him up beforehand to discuss her Washington speech — proposed “the end of history,” the concept that once the postwar rivalry of communism and capitalism had ended in the collapse of the Soviet Union, the world was on a single path toward growing liberal democracy and rules-based trade.

But what Freeland called the “naked evil” of Russia’s action in Ukraine and the growth of autocracy in China, where this week Xi Jinping appears to have become president-for-life, means the world must wake up from the dream of global co-operation, universal democracy and rules-based trade.

But deciding it is now time to give up on good trade relations with Russia and China may have other consequences.

Evidence of how quickly the world has forgotten the global divisions of the past — before perestroika and glasnost and the collapse of the Berlin Wall — came in a recent online search for Comecon and Canada. Instead of offering details of Canada’s relationship with the Eastern Bloc’s Council for Mutual Economic Assistance, the search offered a long list of happenings for Comicon, those “fan expo” events where people dress up as fuzzy creatures and superheros.

Only decades ago, Comecon was a formidable economic counterpart to the market forces of the capitalist West, just as the Warsaw Pact was the counterpart to NATO.

Already crumbling, Comecon disintegrated in 1991 as market reforms and the new opening to the West gave Russia, its former allies and its satellites access to the tools of capitalism. But Radhika Desai, a professor at the University of Manitoba in Winnipeg who specializes in international political economy, says the modern equivalent may be no pushover.

“If China and Russia are able to achieve a really coherent collaboration, which I think is happening more and more … I think they are going to create a really dynamic duo,” Desai said on the phone this week.

“China has shown that it is not just a low-cost producer, but it can also take the lead in technology.”

Desai is concerned that a tighter alliance of Canada with the United States and Britain could lead to an increase in the power of corporations and the loss of clout by workers and citizens, as parties in democratic states find ways to co-opt poorer voters who feel they have been left behind.

But whether all of her democratic allies and their eventual political replacements will agree, Freeland offered a stunning condemnation of globalization and the cheap labour in places like China that has added to the profits of many global companies.

“Workers in our democracies have long understood that global trade without values-based rules to govern it made our people poorer and our countries more vulnerable,” she said. “They have long known that it enriched the plutocrats but not the people.”

Freeland said the world’s democracies must have confidence that their system, one where governments change and people have the right to criticize their leaders, has what it takes to defeat economies based on coercion and to demonstrate to developing countries — once more forced to choose sides — that liberal democracy works.

And just as in the days of Comecon and the Warsaw Pact, there are already signs a Eurasian alliance may be acting to convince the undecided that autocracies can also work, building the groundwork for competition between two new economic — and military — paradigms and power blocs.

Maybe the “end of history” has been postponed.